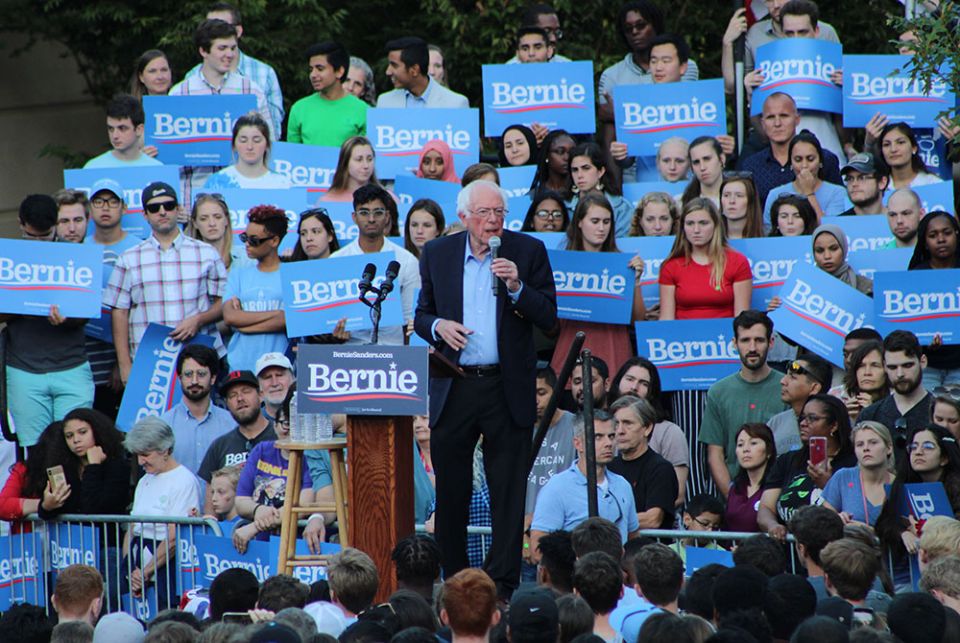 Progressive Catholic voters need to unite behind the campaign of Sen. Bernie Sanders. As I write, the results from Michigan, Washington and other states that voted on Tuesday are not in, but even if former Vice President Joe Biden runs the table, progressive Catholics who have not yet voted should cast their ballots for Sanders. The larger the delegate share Sanders brings to the convention in Milwaukee this summer, the more likely Biden will feel the need to unite the party by endorsing key policies Sanders has advocated and perhaps even choosing a running mate from the more progressive wing of the party.

Those who urge the party to unite behind the Biden campaign because he is more electable, or more moderate or, at any rate, because he has taken the lead, sound like an echo of those who made the same arguments for the candidacy of Sen. John Kerry in 2004. That headlong rush to party unity behind the moderate, electable candidate turned into a headlong rush over the cliff. It dawned too late that Kerry, though a decent man with good values and an impressive resume, was not a very effective candidate.

The Biden candidacy is too risky. Period. Matthew Sitman noted at Commonweal, "as I watch Biden stumble through speeches and debate answers, forgetting important things that did happen and remembering things that didn't, I keep wondering why so few people seem alarmed." The fact that Biden has aged so remarkably since he left the vice president's residence four years ago is understandable, but also undeniable.

One would think that the father of Don Jr., Eric and Ivanka would be shy about dragging Biden's son Hunter through the mud, but President Donald Trump is never going to let a little thing like shame get in his way. And, why have the debate moderators and the other candidates been so willing to look the other way about Hunter's corruption? True, he did nothing illegal, but taking $50,000 a month to be on the board of a foreign oil and gas company is exactly the kind of deep corruption that allowed Trump to muddy the waters on his own Ukrainian corruption. Did Hunter think he really deserved the obscene salary the Ukrainian company Burisma Holdings was paying him to serve on their board? Where did he think that money came from? And should anyone be surprised the Republicans in Congress will make political hay from Hunter's involvement? If Sanders' socialism is considered such a drag on the party, why isn't the corruption of Biden's fils also admitted to be a drag?

And, on top of that, there is his record, so similar to that of Hillary Clinton: voting for the North American Free Trade Agreement, to admit China into the World Trade Organization, the Iraq War, and supporting the Trans-Pacific Partnership trade deal. Can anyone point me to an instance in Biden's long career that gives confidence he might stand up to corporate interests? He has refused to embrace one of the most popular proposals to come out of the Democratic nominating contest, a wealth tax, despite the fact that it polls well among Independents and Republicans as well as Democrats.

Most importantly, the electorate remains in a populist mood. The key divide in the country right now is not between left and right but between establishment and populist. Nominating someone who has been in Washington since 1972 seems foolish at best. Not since Prince Metternich has a commitment to the status quo ante been such a central organizing principle of a political career.

It is true that Biden does not have Hillary Clinton's historic negative ratings. It is also true that he is a much beloved figure in the Democratic Party and that the stories of his essential decency as a human being are many. How will that play out against Trump? The president is a man who has a knack for bringing other people down to his level. On the debate stage, Biden can, like Clinton, try and ignore Trump, stay above the fray, but that comes off as aloof and wimpy. Or, Biden can give as good as he gets, but there goes the decency card. Bullies are grotesque but they are also often effective.

Sanders is not without his own problems. His theory of the case — that only he will stimulate millions of new voters to come to the polls — has not been borne out by turnout numbers so far this year. That said, he is trouncing Biden among young voters and it is young voters who are so hard to get to the polls. If older voters really do think that removing Trump is the most important thing, they will turn out and vote for Sanders in November, but will young people turn out for Biden?

Sanders' political gifts are undeniable. He has the charisma of anti-charisma, a gruffness that communicates authenticity just as Trump's bombast achieves the same result. Both men appear completely candid even when they are lying and even when they know they are lying. Sanders is always unflappable in a debate because he never feels the need to calibrate his answers, still less his policies. What you see is what you get. People are tired of canned, consultant-driven answers from candidates with personalities that are as blow-dried as their hair.

My worry about Sanders' candidacy, this year and four years ago, is that a demagogue like Trump has plenty of material with which to work. In my sleep, I could write the scripts for the attack ad that focuses on Sanders' honeymoon in Moscow. Before the wall fell. His desire to look on the bright side of the Fidel Castro regime and routine promotion of the Palestinian cause, mean he needs to get to 270 electoral votes without Florida's 29 votes. When he discusses health care, he almost never talks about the people he meets on the campaign trail who share their tales of woe in our screwed-up system. No, he always talks about the fact that other countries have a single payer system, as if most Americans care how the Swedes get their health care.

I have my concerns about whether or not Sanders would be an effective president. He is not very good at the human part of politics, the back-slapping and cajoling and persuading that sometimes is required to get a piece of legislation across the finish line. Social Service Sr. Simone Campbell, the head of Network Lobby for Catholic Social Justice, who knows more about how to get things done in Washington than anyone I know, recently cited a news story that Sanders refused to even solicit the endorsement of South Carolina Rep. James Clyburn, an endorsement that proved decisive for Biden's win in the Palmetto state. Sister Simone tweeted, "This is the problem with Sanders. He isn't really a Democrat." I care less about his party affiliation and more about his disdain for the less ideological, more human part of political leadership.

Nonetheless, Sanders advocates the kinds of policies that would meet the standards long identified by Catholic social teaching, and is intent on reviving the idea that government can be a force for good in our society, turning the page on the laissez-faire orthodoxies that have dominated political discourse since the Thatcherite-Reaganite revolution of the early 1980s. Sanders believes in using the power of government to address those important social goods the moneyed interest has ignored or frustrated for 40 years. Biden remains content to nibble at the edges, his policies still looking too much like those once championed by the senator from the credit card corporation state. Yes, he would bring back decency, but does he have a plan to bring back jobs to Luzerne County, Pennsylvania, or Mahoning County, Ohio?

Two weeks ago, I stated my belief that if the economy stays strong, no one can beat Trump and if the economy tanks, any Democrat can beat Trump. I did not know then that the coronavirus would have such a devastating impact on the economy. More and more it is looking like the Democratic nominee will be the odds-on favorite to win in November. It is possible that even Biden will be able to beat him. But everyone should face that proposition with their eyes wide open, unblinded by a conventional wisdom which is almost always more wrong than right.