US bishops are not rushing to Francis-led agenda

Many of the contests for leadership leave me asking, 'What's to choose?' 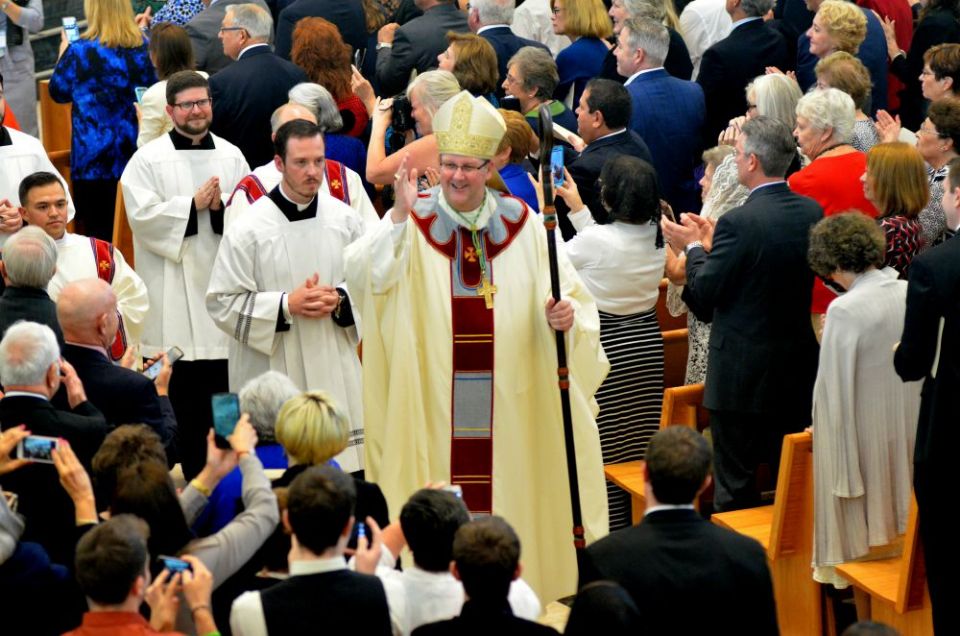 Bishop Gregory Parkes blesses the congregation during his 2017 installation Mass as the fifth bishop of St. Petersburg, Florida, at the Cathedral of St. Jude the Apostle. (CNS/Diocese of St. Petersburg/Maria Mertens)

"And the winner is …" At the Oscars and Emmys, these words are uttered as a star fumbles with an envelope before announcing which nominee won the coveted trophy. At meetings of the U.S. bishops' conference, one of the staples is the election of new committee chairs and other officers. While there is no envelope — and no movie or TV stars — the results of the elections do provide a window into the mood of the conference. Based on the list of nominees, the U.S. bishops are not rushing to embrace a Pope Francis-led agenda.

Oftentimes, the selection process entails a clear-cut ideological choice. Last year, the bishops selected Archbishop Joseph Naumann to become chair of the Pro-life Activities Committee over Cardinal Blase Cupich, a move considered a vote against a "consistent ethic of life" approach and in favor of a more culture-warrior, abortion-only approach. The bishops have already gotten their wish, as Naumann was asking parishioners to pray for the confirmation of a pro-life justice to the Supreme Court, which is a fine thing, but not the only consideration appropriate when considering whether or not to confirm a judicial nominee.

Other times, an older bishop is chosen over a younger one because he has been around longer and knows more of his brother bishops. Or someone may be more affable. Sometimes a bishop has a particular expertise in a given area and that tips the scale. 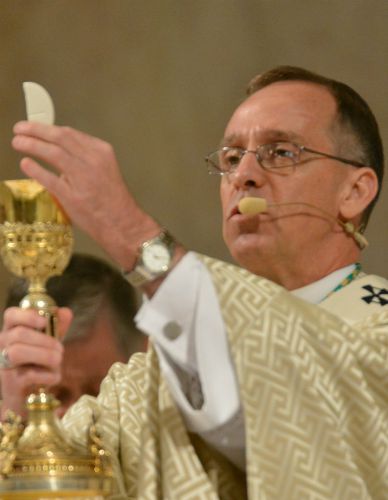 This year, the bishops must elect a new treasurer. The bishop chosen will not only be a member of the executive committee but also will serve as vice chairman of the Committee on Priorities and Plans. This latter committee, among other things, is charged with selecting the nominees for committee chairs in the first place, so it is a consequential post. The nominees are Bishop Gregory Parkes of the Diocese of St. Petersburg, Florida, and Archbishop Charles Thompson of Indianapolis. I would imagine the bishops will select Thompson, who served as Vicar General to Archbishop Joseph Kurtz in Louisville, Kentucky, before being named a bishop in 2011. Kurtz is a genuinely nice man who served as president of the bishops' conference from 2013 until 2016, so I suspect some goodwill has rubbed off on his protégé. Parkes was a banker before entering the seminary and rose quickly: He was a priest for only 11 years before being named Bishop of Pensacola-Tallahassee, Florida, in 2012. He was transferred to St. Pete last year.

I would be delighted with either of the two candidates to take the helm at the Committee on Migration. Bishop Mario Dorsonville-Rodríguez, an auxiliary bishop of Washington, is a very able man and, as an immigrant himself, knows something about the issue. Bishop John Stowe of Lexington, Kentucky, is one of the conference's emerging stars on the social justice front, a bishop cut from the "poor church for the poor" model the Holy Father has commended.

One of the most interesting contests is for the chairmanship of the Committee on Domestic Justice and Human Development. Archbishop Paul Coakley of Oklahoma City has served on a variety of conference committees and has expertise in international development issues, having served from 2014 to 2016 as chair of Catholic Relief Services. His statement attesting to the "personal integrity" of Archbishop Carlo Maria Viganò, after the latter had just issued an 11-page tantrum that called for the pope to resign, seems like a disqualifying misstep. Archbishop John Wester of Santa Fe, New Mexico, has also served the conference on a variety of committees. A gentle soul, he is very well liked across the ideological spectrum. Wester's comments on the Viganò nastiness hit precisely the right point: The focus should be on the victims of clergy sex abuse, not on trying to use the issue to advance an ideological agenda.

Many of the other contests left me asking, "What's to choose?" The nominees to lead the Committee on Laity, Marriage, Family Life and Youth are San Francisco Archbishop Salvatore Cordileone, most known for his affection for buskins and birettas and his anti-LGBT ardor, or Bishop John Doerfler of Marquette, Michigan, who issued a strange directive on Sacred Music that seemed way too authoritarian and somewhat clueless about the need for parishes to cater to different styles of music. Mind you, I am a traditionalist when it comes to liturgy myself, and I strongly dislike most post-Vatican II music, but I would not force my tastes on others. 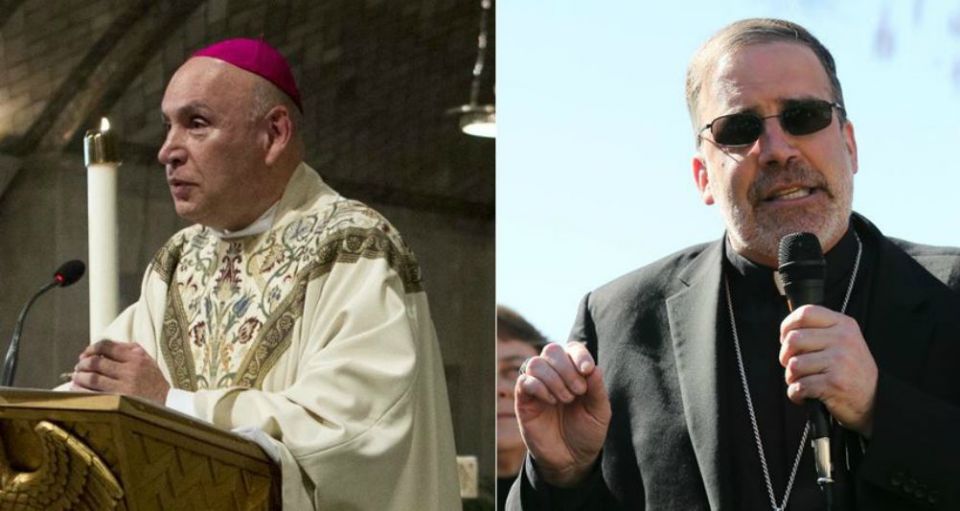 Left: Auxiliary Bishop Mario Dorsonville-Rodríguez of Washington addresses a crowd of largely Salvadoran immigrants in 2016 at the Basilica of the National Shrine of the Immaculate Conception in Washington. (CNS/Rhina Guidos) Right: Bishop John Stowe of Lexington, Kentucky, speaks during a "Catholic Day of Action for Dreamers" protest to press Congress to protect "Dreamers" outside the U.S. Capitol Feb. 27 in Washington. (CNS/Bob Roller)

Similarly, the nominees for the chairmanship of the Committee on Clergy, Consecrated Life and Vocations are Bishop Michael Olson of Fort Worth, Texas, and Bishop James Checchio of Metuchen, New Jersey. Olson was in seminary with me back in the day, and I always enjoyed his company. He is bright and funny, but he has thrown in with the Cardinal Raymond Burke wing of the church, welcoming the cardinal to his diocese after Burke had moved into open revolt against the pope. He also was a little too fawning towards Speaker of the House Paul Ryan during a visit to Fort Worth's Catholic Charities, allowing the organization to serve as a prop for Ryan's libertarian social ethics, which are the antithesis of Catholic social doctrine. Checchio was the rector of the North American College for 10 years. The bishops do not want to admit it, but that school is a scandal, a hotbed of anti-Francis zealotry that produces clericalists who seem to take delight in having avoided any intellectual contamination while studying abroad. It should be shut down. Did he not notice? 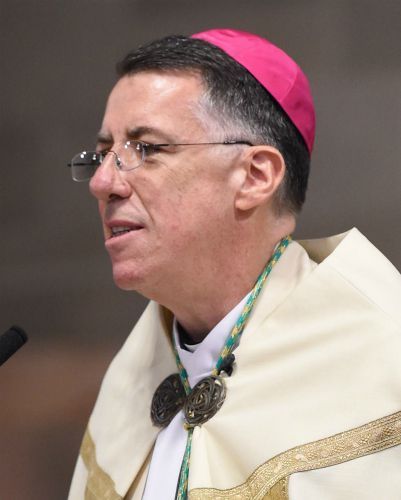 I do not know either Bishop David Malloy of Rockford, Illinois, or Bishop Michael Barber of Oakland, California, but both are considered quite conservative. They are the nominees for the Committee on Catholic Education. Malloy was General Secretary of the U.S. bishops' conference, so he is probably better known than Barber. That said, Malloy's election as General Secretary really marked the beginning of the organization's turn away from effective leadership and toward paralysis and incompetence. Again, the bishops do not want to admit what a mess they have made of the once proud conference, but that is what happens when you place people who are not committed to the conference in leadership positions. As I have said before, it is akin to what happens when you elect the anti-government party to leadership of the government. You end up with an administrator at the Environmental Protection Agency who does not actually think the environment needs protecting.

The Holy Father has been pope for five and one-half years. But looking at these nominations, it is clear that many at the conference still think their organization should be a Francis-free zone. While almost all the attention at the meeting in two weeks will be on the bishops' efforts to confront the clergy sex abuse mess, these elections guarantee that some bishops who are hostile to the pope will be in positions of authority within the conference for the next four years. It is depressing. 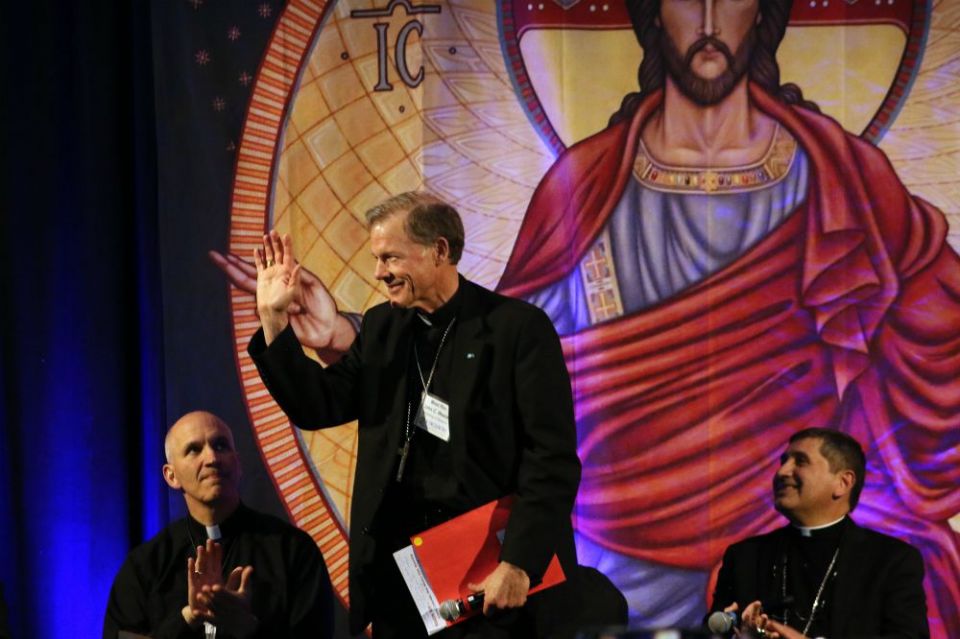 Archbishop John Wester of Santa Fe, New Mexico, center, waves after being introduced at a bishops' panel Feb. 24 in Phoenix at the V Encuentro gathering for Region 13. (CNS/Catholic Outlook/Michael Brown)

Column | US bishops are not rushing to Francis-led agenda