US bishops need to be shepherds amid deportations, demonizations

by Michael Sean Winters
Opinion
Justice
This article appears in the Families Separated at the Border feature series. View the full series. 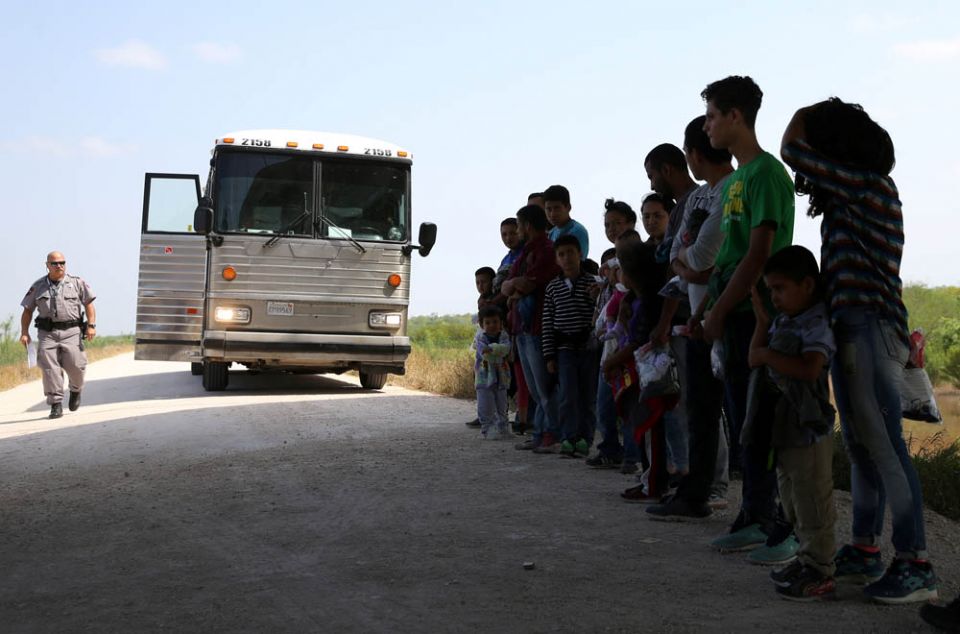 Immigrants turn themselves in to Border Patrol agents April 2 after illegally crossing the border from Mexico into the U.S., and wait to be transported to processing center near McAllen, Texas. (CNS/Loren Elliott, Reuters)

In a few weeks, we shall celebrate the 87th anniversary of the publication of Non Abbiamo Bisogno, Pope Pius XI's blistering encyclical condemning Mussolini's fascist regime for its suppression of Catholic Action and Catholic youth organizations in Italy. The opening sentence of the encyclical, which gives the work its title, is translated in English as "We do not need to acquaint you, Venerable brethren, with the events which have recently occurred."

If Pope Francis were to write a similar encyclical to the U.S. bishops as they gather this morning in Fort Lauderdale, he might consider dropping the "non." And he would not be informing them of events in his city but calling attention to attacks in their cities. For the U.S. bishops as a body seem clueless about the moral situation in which they find themselves. Pius XI understood that the secular power was attacking his children and it was his job to protect them. President Donald Trump is attacking their spiritual children today, and where is the united voice of the episcopacy in this country?

There is the new policy of the administration, separating undocumented parents from their children, and using the threat of such separation to deter desperate immigrants, mostly people who have already trekked from Honduras or Guatemala through the length of Mexico to seek a better future for their families, from attempting to cross the border.

Monday, Attorney General Jeff Sessions announced, "Generally, claims by aliens pertaining to domestic violence or gang violence perpetrated by non-governmental actors will not qualify for asylum." He suggested only asylum seekers who belong to a special persecuted social group, such as the Rohingya, would qualify for asylum although he did not cite the Rohingya, of course, because they're Muslims and this administration is as hostile to Muslims as it is to Mexicans.

Every chance he gets, the president turns a discussion of immigrants into a discussion of criminals, as if the two categories of people were interchangeable. This is not news to anyone: On the day he announced his candidacy he blathered some bigotry about "drugs," "crime," and "rapists." It is always a contest for Trump and his base as to which is more pronounced, their bigotry or their idiocy? Remember Rep. Steve King talking about immigrants with "calves the size of cantaloupes?"

The Holy Father has denounced inequality as the root of all social evil. Jesus came to proclaim good news to the poor. Yet, Trump and his Republican allies passed a tax cut that vastly exacerbates income inequality. Did the bishops raise their voice?

Trump has withdrawn the United States from the Paris accords on climate change, scoffs at the science and has installed an administrator at the Environmental Protection Agency, Scott Pruitt, who is happy to make the air our children breathe and the water they drink as dirty as the ethics he practices. In the face of the most serious threat to our civilization, our president models irresponsibility that would shame a third-grade bully. We may not have time to save the Greenland ice cap. We know that sea level rise may be so far along that millions of people will be displaced and our children will be left to deal with the consequences. Will the bishops raise their voice? Can they even mouth the words "Laudato Si'"? How many have done anything to implement the Holy Father's vision of a less carbon-dependent infrastructure?

This week he managed to antagonize all of our allies, stipulating that they constitute a national security threat in order to justify imposing tariffs on their products. He seemed especially eager to pick a fight with Canadian Prime Minister Justin Trudeau. Now, I am no fan of Trudeau's anti-Catholic policies, but who picks a fight with Canada? If you go to Normandy, above the beaches you will see row upon row of Canadian and British graves in a cemetery just down the road from the cemetery that holds the American war dead. Further east, you will find similar cemeteries from the First World War and from the Battle of the Bulge. Even someone with the crude sense of tribal identity exhibited by our president should be able to see that our alliances with Canada and Western Europe were sealed in blood.

They are built, too, on something he seems not to esteem, common values. The reason NATO was formed was to stand as a bulwark against Soviet expansionism. It was not the calculation of traditional sphere of influence politics. Stalin's Russia brought death and torture and the KGB to whatever countries the Red Army "liberated." NATO was built to defend a way of life, an approach to government, a shared set of values. None of that means a whit to this witless occupant of the White House. Will the bishops stand up for our own nation's proudest history? For the dead and wounded who saved Europe first from Hitler and then from Stalin?

Yesterday, we all were greeted with pictures of the president shaking hands with Kim Jong Un, the leader of a murderous, rogue regime. They had signed an "historic agreement," we were told, but it did not actually pledge the dictator to do anything specific about denuclearization or human rights. Isn't this the same president who called the Iran nuclear deal "a bad deal"? Trump promised to suspend "war games," an admittedly ill-chosen name for training, conducted regularly by our South Korean allies and the U.S., a pledge that should bring no solace to South Korea or to our U.S. troops. I am glad the president has replaced his bellicose rhetoric of last year with smiling photos this year, but the charade of a "deal" exposed the limits of Trump's foreign policy vision. He got a nice photo. That is what matters to him. I half expected him to depart Air Force One with an umbrella and announcing he had achieved "peace in our time."

And if one more conservative Catholic justifies their embrace of this president by citing Neil Gorsuch, I am going to throw up. I am sure Gorsuch is a fine man and scholar. I am glad he is pro-life. But he has no business sitting in Merrick Garland's seat. I can't lay the blame for this on the president. Sen. Mitch McConnell deserves the lion's share of the blame. Still, the violation of democratic norms is a profoundly immoral thing, not a source for celebration.

Non abbiamo bisogno. The Vatican learned too late that dealing with dictators was fool hardy and immoral. Trump is not a dictator, though no one can really doubt he would become one if he could, but he is a disaster. I understand the bishops should not wish, in normal times, to be too closely aligned with any administration or with the opposition. These are not normal times. The bishops are shepherds of the church and it is a shepherd's job to protect the flock from wolves. The bishops need to think long and hard what it means to protect the flock during these years of deportations and divisiveness, failed diplomacy and moral ruin.

Column | US bishops need to be shepherds amid deportations, demonizations

Nielsen's policies were both inhumane and ineffective, advocates say