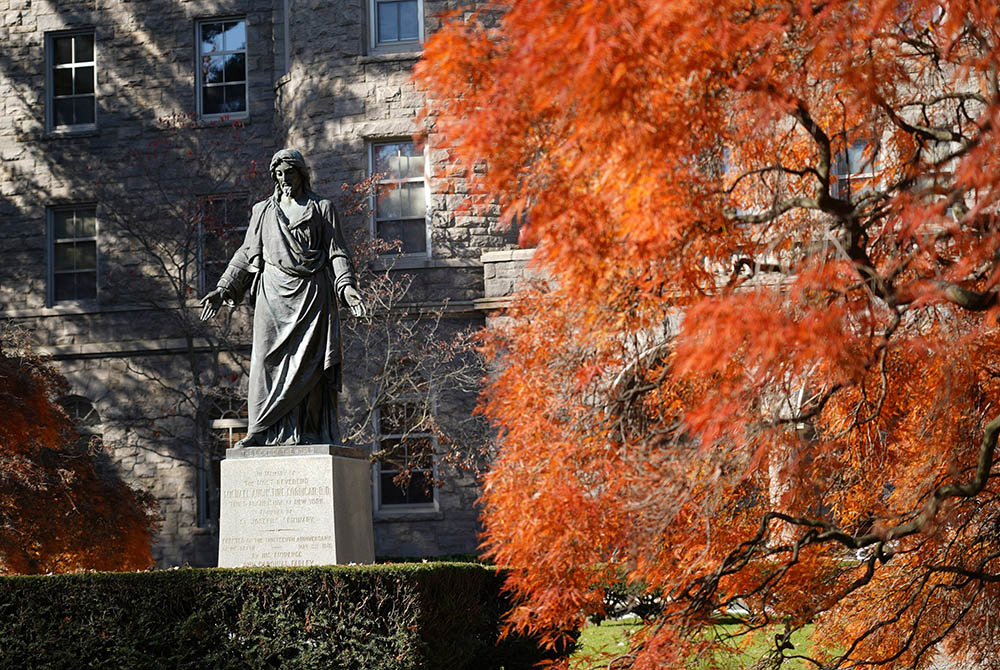 A statue of Jesus is seen amid autumn leaves at St. Joseph's Seminary Nov. 7, 2020, in Yonkers, New York. (CNS/Gregory A. Shemitz)

It is not technically autumn for another few weeks, but if you are the son of a schoolteacher, you always associate the end of summer and the start of autumn with Labor Day and the beginning of the school year. This autumn, a particularly Catholic lesson needs to be learned by our American culture.

This was not the summer any of us had expected. It was supposed to be the summer when our country defeated the COVID-19 virus and life returned to normal. For most of us, and for much of the country, life did return to normal more or less. But we have not defeated COVID-19. And therein is the cultural lesson for the American psyche that our Catholic faith can impart.

The daily, ever-shifting story is one of epidemiology and public health issues, and I neither possess nor aspire to the possession of knowledge in such fields. If Tony Fauci says to do something, I do it. The ongoing, long-term issues of how our society and culture and church have been coping with this pandemic, and what that coping illustrates about us, that has been the area where my mind has been roaming lately.

I am not concerned here with the precise issue of why the virus is still around. That seems pretty obvious: For a variety of reasons, a significant proportion of the population declined to get vaccinated, and the unvaccinated proved perfect hosts for the delta variant that had come to our shores in the meantime.

This autumn, a particularly Catholic lesson needs to be learned by our American culture.

Now, as summer ends, I want to look at how the American psyche is ill-suited to deal with the current situation in which many of us are vaccinated and might contract a mild case of the virus, but in which the public health countermeasures — masking, social distancing, booster shots — are being reinstated.

What is meant by "American psyche"? In Volume III of his war memoirs, Winston Churchill recounts his visit to Washington and Ottawa at Christmastime 1941, shortly after Pearl Harbor, to confer with President Franklin Roosevelt about the conduct of the war. He writes:

At Washington intense activity reigned. During these days of continuous contact and discussion, I gathered that the President with his staff and his advisers were preparing an important proposal for me. In the military as in the commercial and production spheres the American mind runs naturally to broad, sweeping, logical conclusions on the largest scale. It is on these that they build their practical thought and action. They feel that once the foundation has been planned on true and comprehensive lines all other stages will follow naturally and almost inevitably. The British mind does not work quite in this way. We do not think that logic and clear-cut principles are necessarily the sole keys to what ought to be done in swiftly changing and indefinable situations. In war particularly we assign a larger importance to opportunism and improvisation, seeking rather to live and conquer in accordance with the unfolding event than to aspire to dominate it often by fundamental decisions. There is room for much argument about both views. The difference is one of emphasis, but it is deep-seated.

Churchill was exactly right: Our American psyche does run "naturally to broad, sweeping, logical conclusions on the largest scale" and that trait has been seen in our response to COVID-19: The shutdown of the entire economy in the spring of 2020, the push for research and production of a vaccine, an unprecedented distribution effort. Other traits, such as an inflated, libertarian understanding of individual freedom, exacerbated since Churchill wrote his observations, have hobbled our effort to confront the pandemic.

An additional trait resulted from the Second World War and its aftermath, and so we can forgive Churchill for not mentioning it: Americans believe that there is no problem that can't be solved, a kind of pragmatism on steroids. This transcends the normal liberal vs. conservative divide: Both believe they can solve the problems that afflict us. We overcame the Great Depression. We beat Hitler and Tojo. We sent a man to the moon. Both left and right have mythologies that explain these triumphs as the result of those parts of the American psyche most identified with their political brand, but they share the commitment all problems are solvable.

This is not the Catholic view. More years ago than I care to acknowledge, I had the good fortune of studying moral theology with Fr. Charles Curran. He explained to us that the Catholic moral tradition is not only rooted in the Decalogue and the seven deadly sins, but even more so in the Catholic moral tradition that reflects the five great revealed truths of our faith: Creation (human nature is fundamentally good); the Fall (human nature is radically afflicted by sin); Incarnation (Jesus Christ "reveals humankind to itself," as Vatican II taught); the Redemption (the gratuitousness of divine grace revealed in the sufferings and resurrection of Jesus Christ) and the Eschaton (our redemption is incomplete, there is a "not yet" quality to the Christian life.)

All five are evident in different ways in our national response to COVID-19, but it is the last that seems most essential for the ambient culture to learn from our Catholic tradition at this moment.

We are living in a "not yet" experience with COVID-19. More than half the nation is vaccinated but, meanwhile, the delta variant is spreading among the unvaccinated quickly and the vaccines we have are not as effective against the delta variant as they were against the previous iteration of the virus. New variants — mu and lambda and C.1.2 — have been identified. Masks are back in most jurisdictions although – perhaps more evidence of the effects of the Fall — in some Republican-controlled states, mitigation measures like masks are shunned even though those same states have no more ICU beds available to treat patients. At the level of public health, we are far from solving this problem and putting it in the win column.

The American psyche is being challenged in other ways too. The news from Louisiana is grim: The great city of New Orleans has been without power for a long time as the large, high voltage cables that bring power into the city were all felled by Hurricane Ida. The electric "grid" epitomizes the "broad, sweeping, logical" conclusion to the issue of providing electricity to a large city, but perhaps smaller, local, sustainable sources of energy would prove better able to survive a massive storm.

The tragic war in Afghanistan proved our military can conquer lands but not hearts, that there were no solutions, logical or otherwise, to the problems posed by that conflict.

Even those "solutions" that have proven wonderfully effective through the centuries — the two-party system, an independent judiciary, federalism — are showing some wear and tear.

One of the themes of my column in recent months has been that the Catholic intellectual and moral tradition has been distorted by the culture wars but that tradition contains all we need to correct the distortions. I am realizing in new ways, during long walks and through long conversations with smart friends who come to visit, that our Catholic moral tradition continues to provide wisdom and insight into the most intractable and deep-seated challenges facing our nation.

Perhaps the most important wisdom is that there are not always solutions to those challenges, that God, and not ourselves, will have the last word on our human story, that we must learn to live with the "not yet" quality of life this side of the Eschaton.