Editorial: We must be witnesses to peace, justice in election's aftermath

Given the stakes, this is not a time for peace at any cost; but all protests and witnesses must be nonviolent 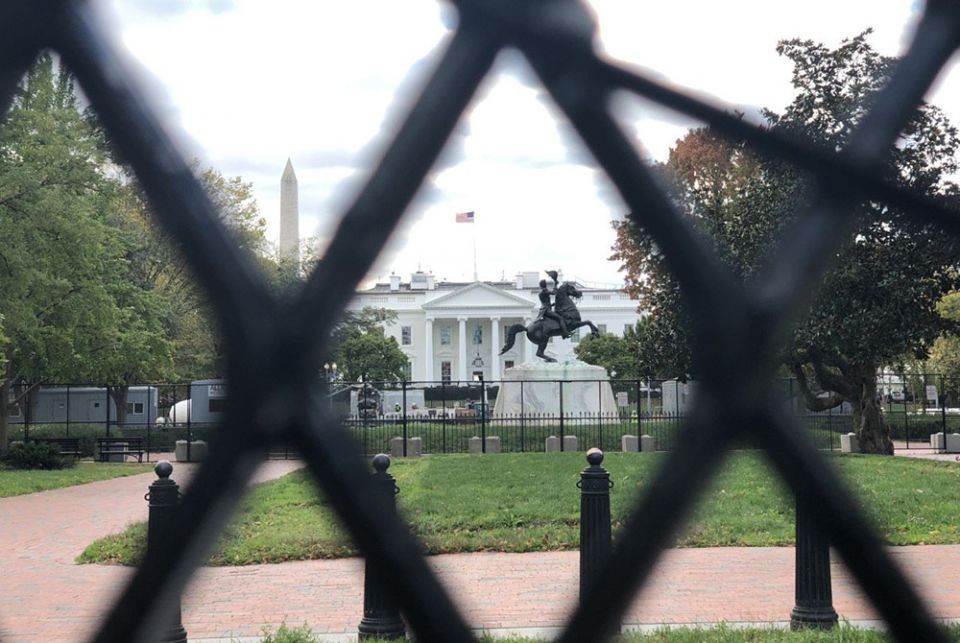 The White House and the Washington Monument are seen in the distance past a fence Nov. 2. Buildings in the District of Columbia and in other U.S. cities were being boarded up in anticipation of violence breaking out over results of the Nov. 3 elections. (CNS/Rhina Guidos)

Elections are, by definition, fraught with tension, since they result in winners and losers. But never in our lifetimes have we faced the very real possibility — in fact, probability — that violence may erupt in the aftermath of Election Day, if not during it.

A bedrock of our democracy — the peaceful transfer of presidential power — is in danger. Even worse, it has been placed in danger by design.

President Donald Trump's repeated refusals to commit to conceding defeat throughout the campaign, his persistent and baseless assertions that the only way he can lose is if the election is rigged, his casting doubts about the integrity of mail-in voting — as well as his administration's and his party's myriad attempts to suppress voter turnout — raise the real concern that he may use legal or even illegal means to hold onto power.

If that sounds like hyperbole, consider that a report from the bipartisan Transition Integrity Project said Trump is "likely" to contest the results, and the group's simulations of what could happen if he does: "Virtually all ended with street-level violence," as a source told Politico.

A majority of American voters expect violence after the election, and even more are fearful of civil unrest.

It's true that groups with names like "Protect the Results" are encouraging "massive mobilization" if Trump tries to undermine the election. Other groups such as Waging Nonviolence are educating citizens about how "to stop a coup": First step: Don't expect results on election night. Second step: Call it a coup if the government stops counting votes or declares someone a winner or allows them to stay in power if they did not win.

While we are suspicious of polls after 2016, there is virtually no way Trump can win the overall popular vote. Instead, his strategy seems to be to try to get enough Democratic votes thrown out in swing states to eke out an Electoral College win. As historian Heather Cox Richardson said, "Never before in our history has a candidate openly planned to win an election by gaming the system, but here we are."

And the president's recent comment that he might "leave the country" if he loses has a former Army brigadier general saying in Politico that the flight of a U.S. president would be "unprecedented" but "not a stretch," given Trump's history, personality and the consequences facing him if he no longer has the protections of the presidency.

Unprecedented, indeed. We are in for scary days, weeks and even months ahead.

While the Trump and Biden campaigns arm themselves with teams of lawyers to challenge close or contested state results, everyday folks are arming themselves with more literal weapons. Gun sales, which apparently always spike before national elections, have skyrocketed to record rates, especially among first-time gun buyers, and including those on the left and the right, prompting one gun-show attendee to observe to The New York Times: "Everybody is arming themselves against their neighbor."

Sadly, there is already evidence that some folks are using those weapons to intimidate voters at the polls. Voting in person is already dangerous enough this year, given the coronavirus pandemic; citizens should not literally have to risk their lives to participate in our democracy.

In the midst of all this uncertainty and anxiety, what are Catholics who care about free and fair elections, but who also follow the Prince of Peace, to do? 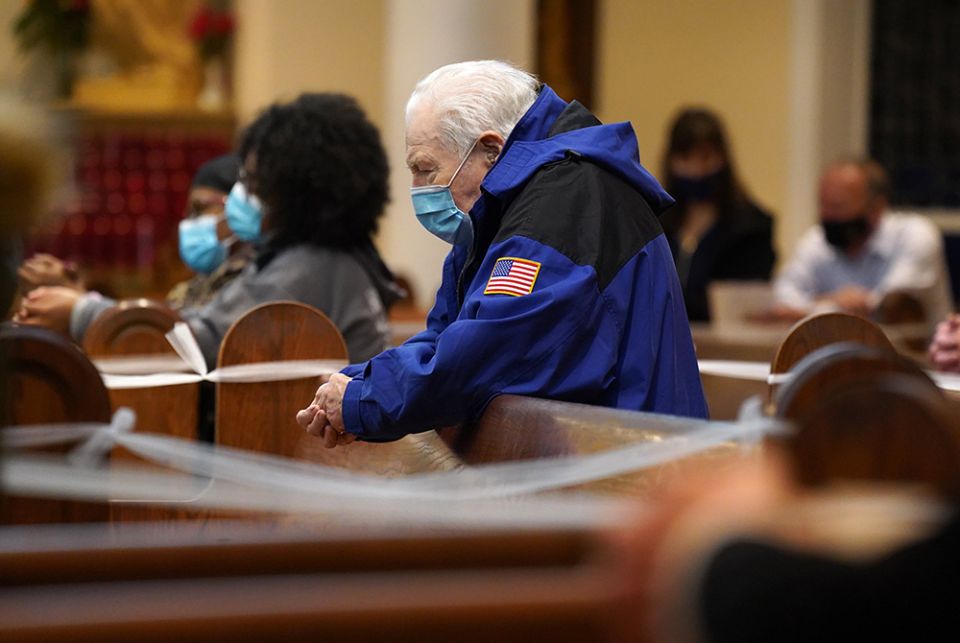 Ignatius Rienzo, a Knight of Columbus, prays during a special Holy Hour celebrated Nov. 1, to offer prayers for the nation two days before Election Day at St. Patrick Church in Smithtown, New York. The service was organized by the parish's Legion of Mary praesidium. (CNS/Gregory A. Shemitz)

Given the stakes, this is not a time for peace at any cost. No American can sit back as our democracy is undermined.

But any protests or witnesses must be nonviolent. As nonviolent activists have long taught, only love, not hate, can bring redemption and reconciliation. Violence only hurts the cause and feeds the lie that the left is the real source of tyranny.

When NCR asked five contributors to advise what Catholics should do in the aftermath of this election, all agreed that we must continue to work for our values of justice, inclusion and care for the least among us. As Bishop John Stowe of Lexington, Kentucky, writes in our "What now?" series, "After the election, rather than in the midst of it, is the time to be forming consciences for faithful citizenship."

We can take our instructions from the Gospel reading from the Sunday before Election Day, Jesus' Sermon on the Mount. We must be peacemakers, we must hunger and thirst for justice, we must show mercy. In this sermon and elsewhere in the Gospels, Jesus turns earthly power on its head. Blessed are the meek, those who mourn, those who suffer persecution for justice's sake.

We are in this mess precisely because of a president who sought earthly power over and above any policy or even ideology. In countering that, we would do well to follow the Rev. Martin Luther King Jr.'s principles and steps of nonviolence, that seek to defeat injustice, not people, and through friendship and understanding, build the Beloved Community.

Whether it is Trump or Biden who will lead our country for the next four years, there is much work to do to heal our divisions, to heal our earth, to heal our broken health care system and those suffering from this pandemic, to heal those hurt by all the policies — not just of the last four years but of decades — that favor the powerful at the expense of the poor. And we must try to heal our church, which has been torn by political extremism.

We see hope in the long lines of Americans waiting to cast their vote, in Republicans crossing party lines to say "Enough is enough," and in some church leaders trying to counter the message that our faith requires single-issue voting on abortion at any cost.

No matter what the outcome of the election, there is evidence that democracy is rising. Now let's work — peacefully, and inspired by the Sermon on the Mount — for justice and healing in the aftermath of this most extraordinary time in our nation's history.

A version of this story appeared in the Nov 13-26, 2020 print issue under the headline: We must be witnesses to peace .

Editorial | Editorial: We must be witnesses to peace, justice in election's aftermath

Panel: The 'forgotten' propelled Trump to victory, but others are in fear