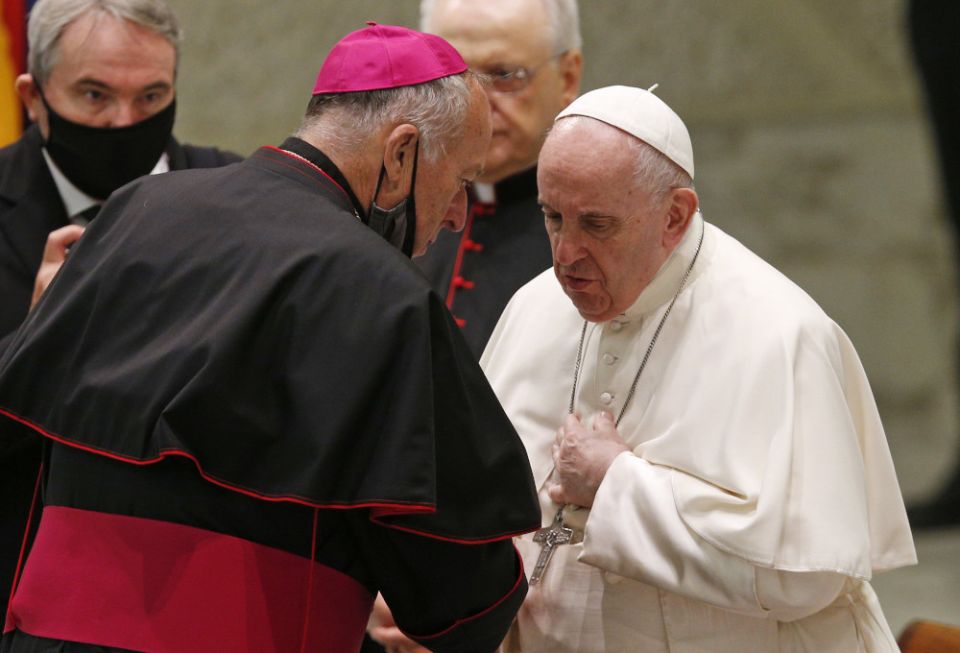 Pope Francis speaking with now Cardinal-designate Robert McElroy of San Diego during a general audience in the Paul VI hall at the Vatican in September 2021. (CNS photo/Paul Haring)

The news that Bishop Robert McElroy of San Diego has been named a cardinal is thrilling. The first American to be named a cardinal who was not already an archbishop or a top Vatican official, McElroy has long been recognized as the leading intellectual among the U.S. bishops. He is America's Newman.

St. John Henry Newman was the Anglican clergyman and Oxford don turned Catholic priest, who emerged as the leading 19th Century theologian of the English-speaking world. He earned many enemies along the way, but Pope Leo XIII recognized his wisdom and named him a cardinal in 1879. His writings were seen as a precursor to the Second Vatican Council just as McElroy's writings are seen by some as among the finest applications of the teachings of that same council.

NCR has a long association with McElroy. Back in 2010, NCR's Tom Roberts ran the first national profile of McElroy when he was named an auxiliary bishop of his home city, San Francisco. He has written for us many times, including what remains the best article on synodality from a U.S. bishop to be published to date.

Understandably, I am very excited by the announcement and extend the new cardinal my best wishes.

One wonders if the official U.S. delegation to the August consistory where McElroy will receive his red might be led by a prominent Catholic who is also from San Francisco: Speaker Nancy Pelosi. What an exciting thought. I wonder if San Francisco Archbishop Salvatore Cordileone's ban on Pelosi receiving communion extends to the Diocese of Rome?

There will be some gnashing of teeth in certain conservative circles to be sure. Michael Warsaw, CEO at EWTN, published an article at the National Catholic Register two days before the announcement, entitled, "A New Era?" Warsaw pointed to Cordileone's action against Pelosi. Right meme; wrong application. It is the McElroy appointment that signals a new era.

A protégé of the late San Francisco Archbishop John Quinn, McElroy carries on Quinn's example of civic engagement by means of intellectual engagement. Very few bishops have the theological depth or range that McElroy brings to virtually any topic. Like Quinn, he is a churchman who sees past and through the often small and sterile public debates of the day to the core values and foundational principles at stake. From heaven, I think Quinn is smiling broadly at this news.

McElroy was on the receiving end of what I considered the most ill-mannered conduct by a president of the U.S. bishops' conference in my many years of attending their meetings. In 2015, during the debate on the bishops' document on voting, Faithful Citizenship, McElroy made a powerful intervention calling for the bishops to scrap the text and start over. Cardinal Daniel DiNardo, then the conference vice president, replied brusquely to McElroy, commenting on the latter's "rhetorical flourishes" as if rhetoric was the heart of the matter. It was appalling. I wonder what DiNardo thought of the news McElroy will be joining him in the College of Cardinals?

There will be plenty of time to reflect on what this means for the U.S. church going forward. Some wondered if this news means McElroy will be transferred to an archbishopric, but I doubt it, at least not right away. The elevation of Cardinal Joseph Tobin to the archdiocese of Newark shortly after he was named a cardinal in 2015 was different: Tobin's name was already being considered for Newark when the pope named him a cardinal. Besides, the U.S. church needs a cardinal on the West coast.

What we can say is this: Cardinal-designate McElroy has long been seen as the intellectual leader of those bishops most closely aligned with Francis, and the pope has confirmed that assessment. Like Newman, he knows the Catholic tradition in detail and applies it with dexterity and fidelity, and he is unafraid of new challenges. It is a thrilling day for the church in the United States. Thrilling.

A version of this story appeared in the June 24-July 7, 2022 print issue under the headline: Cardinal McElroy: Francis' choice to elevate San Diego bishop an unmistakable sign .

Newman: the 'sense' and 'consent' of the faithful