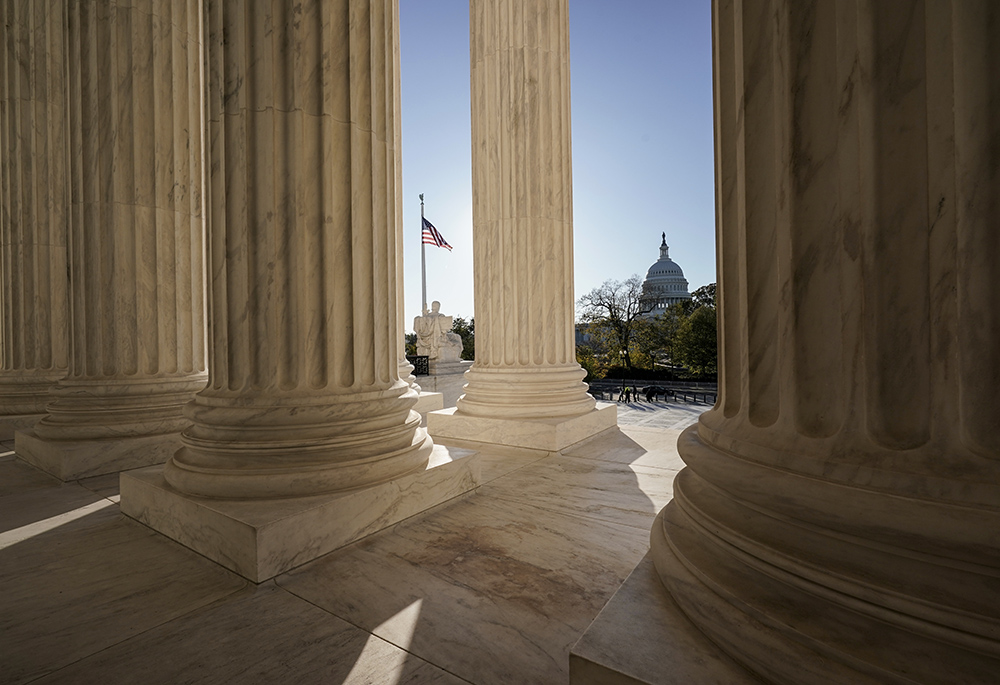 The Supreme Court is seen Nov. 4, 2020, in Washington, with the U.S. Capitol in the distance. (AP photo/J. Scott Applewhite, File)

Two polls conducted since the decision was announced indicate that a majority of voters disagreed with the decision.

If this were a presidential election, those numbers might be game-changers. But this November's elections are midterm elections. The Cook Political Report lists only 32 of 435 races as toss-ups. In the Senate, five out of 35 races are deemed competitive by Cook. Currently, Democrats hold three of those five seats, and the GOP holds two. Four of the toss-up Senate contests are in states that Biden flipped in 2020: Arizona, Georgia, Pennsylvania and Wisconsin. Michigan, which Biden also flipped, has no Senate race this year.

With the Senate evenly divided, and the Democrats' margin in the House down to five, motivating an extra percentage point or two of voters to get to the polls could make a big difference in who controls the two chambers.

There is no evidence so far, however, that reaction to the Dobbs decision will create the kind of wave election that would catapult the Democrats past the filibuster-proof threshold of 60 Senate seats which they achieved in the wake of the 2008 economic meltdown. Only if the pollsters are missing large numbers of people who have never voted before but who will be galvanized by the decision to vote would a wave like the 2008 one materialize.

That analogy points to another difficulty in calculating the political fallout from the court's decision: After Dobbs, and after the congressional hearings into the Jan. 6, 2021 attack on the Capitol, the issue on most voters' minds remains the economy and specifically inflation. There are undoubtedly many people who will be reminded of how angry they are about Dobbs between now and Election Day, but all voters are reminded about inflation every time they go to the store or fill up the car with gas.

These competing claims on voters' loyalties will be especially pronounced among that slice of the electorate that put Joe Biden in the White House: Suburban women. They need to fill up their cars every week and a majority of them care about abortion being safe and legal. They are the ultimate swing voters.

Midterms are all about turnout. In 2018, for example, 3,939,328 voters went to the polls in Georgia, when there was a highly competitive gubernatorial contest. In 2020, 4,935,487 Georgians cast ballots for either Biden or Donald Trump. If either party finds a way to get some of those million voters who sat out the 2018 midterms to turn out in 2022, they can hugely affect the toss-up Senate race in Georgia.

Pennsylvania is another swing state where the Senate contest is ranked as a tossup. In the 2018 midterm, 5,009,400 voters went to the polls in the race won by incumbent Democratic Sen. Robert Casey. In the 2020 presidential election, Biden won the votes of 3,458,229 Pennsylvanians to Trump's 3,377,674. Motivating some percentage of those 1.8 million residents of the Keystone State who sat out the last midterm to show up this time could tip the balance.

The most important races for the future of abortion policy in this country will be contests for seats in the state legislatures. But, like seats in Congress, the state legislative districts are gerrymandered, reinforcing the already regional bias toward one party or the other throughout the country.

For those of us who consider ourselves pro-life Democrats, the short-term prospects could scarcely be more grim. Our fellow Democrats view us with suspicion if not hostility. It is doubtful that Republicans will join us in promoting social programs that support pregnant women and mothers. At the state level, the extremes will dominate the debate as they have at the national level, at least at first. Attaining the kind of compromise that characterizes most European nations seems distant.

The long-term consequences of the decision to overturn Roe are more difficult to foresee. One thing is certain: The culture wars are not going away and, in them, abortion policy functions as a totem, symbolic for both sides' competing views on a range of issues, as well as a specific public policy issue. It is the role of the Catholic Church and of all religious actors in our society to build ways of gentleness and paths of peace.