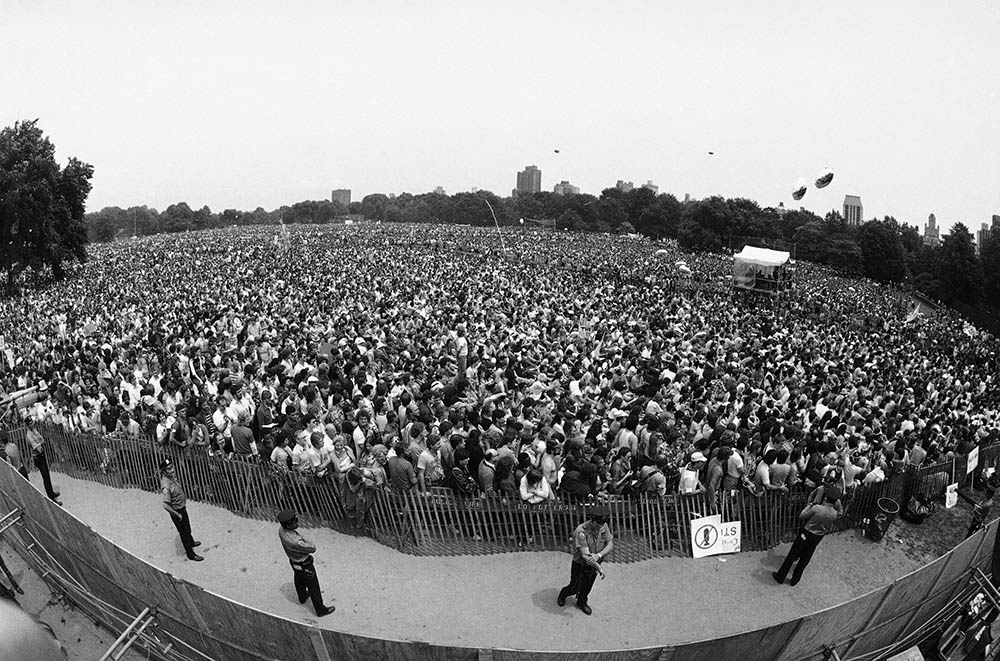 On June 13, 1982, The New York Times reported that on the previous day 700,000 people had marched from the United Nations to Central Park in Manhattan as part of the country's largest-ever protest calling for an end to the nuclear arms race and in support of global nuclear disarmament.

It was 40 years ago, at a time of great Cold War tension between the U.S. and the Soviet Union. The march was held during the U.N. Second Special Session on Disarmament, part of an international effort to rid the world of weapons of mass destruction.

The Times story stated: "Asserting that the nuclear arms race, while threatening mankind with extinction, already damages life on the earth, scores of speakers at yesterday's disarmament rally sought to show how their individual constituencies were suffering.

"There were black and Hispanic leaders pointing out the connection between big military budgets and reduced social programs for the poor, union leaders asking for jobs instead of costly weapons, doctors voicing concern about current radiation levels and mothers worrying about their children's future."

Unfortunately, the points made in that story are still applicable today. Ironically, four decades later, even after the collapse of the Soviet Union, the threat of the use of nuclear weapons has never been greater.

Since the inception of nuclear weapons, U.S. officials at the Pentagon, as well as other leaders of nuclear-armed nations, have argued that the weapons will never be used because of the prospect of mutually assured destruction (MAD), which asserts that no nation would use nuclear weapons because any retaliatory response could mean the end of the world. MAD basically implies that nuclear weapons are props, but nothing could be further from the truth.

The nuclear stakes have been raised due to the war being waged between Russia and Ukraine. Yes, Russia is the clear aggressor, but with the U.S. sending billions of dollars' worth of weapons to Ukraine, the tension is rising as U.S. weapons are being used against Russia, causing much death and suffering for all involved.

Vladimir Putin has put his nuclear arsenal on high alert. And former President Donald Trump also threatened the use of nuclear weapons against North Korea, also a nuclear power. Trump told Kim Jong Un the U.S. had a "much bigger and more powerful" nuclear button, and he would answer any threats "with fire and fury like the world has never seen."

Every day, there are stories published addressing heretofore unmentioned topics such as "World War III" and the possible "limited" use of "tactical" nuclear weapons by the Russians. Such considerations should be unthinkable in a rational world, but with emotions high, and most Americans supporting our proxy war with Russia, there is the absence of rational thinking here at home and in Russia and Ukraine.

Political pundits are now contemplating the unthinkable: If his back is to the wall in Ukraine would Putin use nuclear weapons to fend off defeat?

And what would the U.S. response be to Russia's use of nuclear weapons? Just thinking about such a scenario is gut-wrenching. In order for MAD to be a viable strategy, nuclear weapons can never be deployed; those weapons must remain unused in perpetuity.

In a recent post on his Substack, former U.S. labor secretary Robert Reich said he had thought nuclear powers would "never risk war against each other because of the certainty of mutually assured destruction."

"I bought the conventional wisdom that nuclear war was unthinkable," Reich wrote. "I fear I was wrong."

In a speech to the crowd on June 12, 1982, New York City Council President Carol Bellamy welcomed the marchers with an omen: ''Look around you for just one moment, my friends, at the beauty of New York's urban landscape, then consider that the detonation of a single one-megaton bomb would flatten every building in sight."

"The flash of white light, the force of the fireball, would within seconds char, batter and crush every living being within a 9-mile radius, the winds spreading radiation and fire far beyond," she said. "Paper treaties are not enough. We must together leave the negotiating table, enter the silos and dismantle this weaponry.''

Bellamy was correct: Disarmament is our only hope.