Since the Amazon synod, what has happened to talk of synodality? 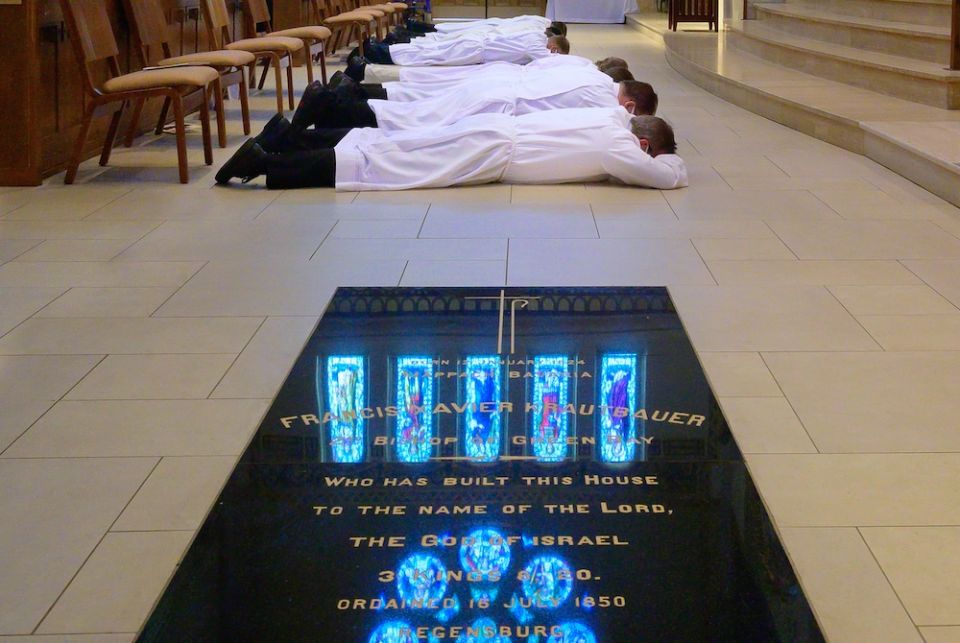 Eight candidates for ordination to the diaconate lay prostrate on the floor of St. Francis Xavier Cathedral in Green Bay, Wisconsin, Aug. 1. (CNS/ The Compass/Sam Lucero)

Lest we forget, the church is not a democracy.

So what is all this talk about "synodality?" How can the talk become the walk when it comes to women in the church?

On one level, synodality means collegiality, which brings us back to where we started from. Collegiality in the Catholic Church means priests and bishops talking to each other and deciding what they want to do. Pope Francis has said that synodality, very close to his heart, "is walking together, and it is what the Lord expects of the Church in the third millennium." But who is walking with whom?

OK. There was lots of talking together and walking together at the recent Synod of Bishops for the Pan-Amazon region. Some 230 men and 35 women were in the Paul VI Hall and in the 12 language discussion groups — five Spanish, four Portuguese, two Italian, one French/English.

But on the interrelated questions of married priests and women deacons, the talking and the walking fell short. There was overwhelming support for each proposal: 128 for with 41 against ordaining married deacons as priests, and 137 for with 30 against women deacons.

But the wishes of the group do not seem to have changed things.

The question of women in the church stops at the doors of the male-controlled Curia. The underlying problem: lingering remnants of disgraceful beliefs presented by medieval cardinals and canonists, some even promulgated by popes. None today will say it out loud, but there is written evidence that church hierarchs saw women as a) unclean; b) stupid; c) untrustworthy; d) deceiving; and e) too many other offensive descriptors to record here.

What's a woman to do? There is an expression in the military that, when the troops stop complaining, the commanding officer is in trouble. I have the feeling that women are no longer complaining, or, if they are, they will not be complaining much longer. The recent curial chest-thumping by the Congregation for the Clergy, insisting that priests are in charge even when others are involved, may be enough to put women over the top. Or it may be a rebuke to Francis, who seems to think women are really OK.

But walking together? Many women walk away from the church every day, taking their husbands and children with them. See the evidence in the newspapers: How many Catholic weddings have you read about lately? How many Catholic baptisms are in the parish bulletin? And, pandemic or not, Masses have more people over age 60 than under.

In Rome, the hair splitting continues. Misleading canons are trumpeted about. The saddest: During the synod, retired German Cardinal Gerhard Müller, once prefect of the Congregation for the Doctrine of the Faith, waved the Tridentine canon about sacraments in the faces of the synodal men and women who sincerely asked for change. 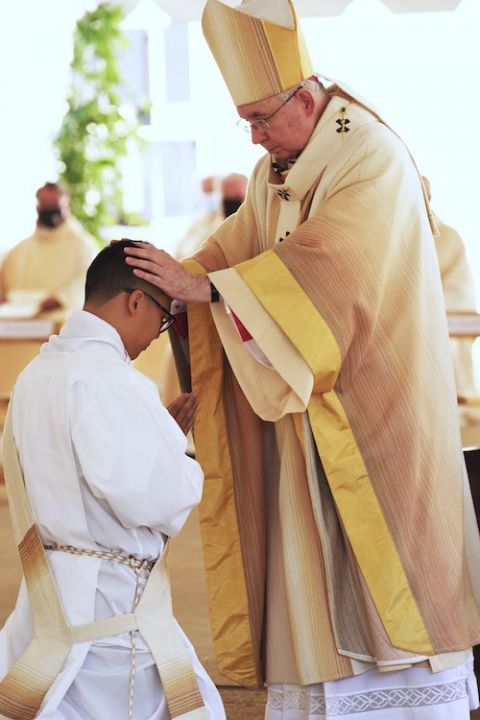 Los Angeles Archbishop Jose Gomez blesses Fr. Justin Oh as he ordains eight new priests Aug. 8 on the plaza of the Cathedral of Our Lady of the Angels in Los Angeles, the first time in the history of the archdiocese that an ordination was held outdoors. (CNS/Courtesy of the Los Angeles Archdiocese)

He said women could not be ordained (at any rank) because the Council of Trent said the substance of a sacrament could not be altered. Maybe he missed the memo (or, rather, the papal encyclical Sacramentum Ordinis), but in 1947, Pope Pius XII decreed that the matter of ordination was the imposition of hands, and the form of ordination was the words signifying the grace of the Holy Spirit. The substance? Well, obviously human beings are ordained, but there is no doctrine overturning the historical precedent of ordaining women as deacons.

Nor is there any doctrine against ordaining a married man as deacon or priest. The synod members who argued on behalf of ordaining married men as priests affirmed two points: 1) celibacy is a great gift to the church and should be maintained; 2) the Amazon region is in such crisis now that individuals are bereft of Eucharist.

The synod members, talking and walking together, also affirmed the pastoral need for the church to restore its historical practice of ordained women deacons.

Do you think anyone is listening?

Column | Since the Amazon synod, what has happened to talk of synodality?

Pray, be poor, be close to the people, pope tells new priests