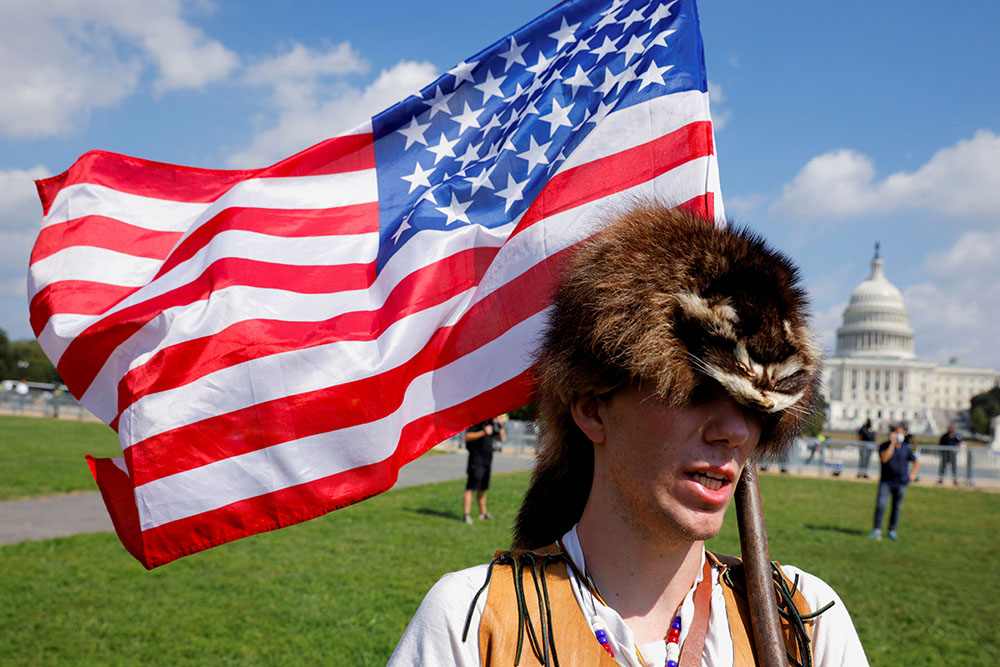 A man in Washington wearing a raccoon hat Sept. 18 talks about how he believes former President Donald Trump won the 2020 election but it was stolen from him through fraud. He was part of a small crowd that gathered near the Capitol to protest the treatment of those jailed related to the Jan. 6 riot. (CNS/Reuters/Jim Bourg)

It's hard to remember an op-ed piece generating as much comment as Robert Kagan's essay in The Washington Post this weekend has. "Our constitutional crisis is already here" is a must-read, and it conveys the urgency of the situation. Kagan is not a liberal or a Democrat, but a pretty hard-nosed neoconservative, who worked in the State Department under President Ronald Reagan, yet he is especially hard on the leaders of the GOP who are effectively enabling former President Donald Trump's efforts to undermine democracy. More on this soon.

Relatedly, and importantly, President Joe Biden has decided not to assert executive privilege to protect records of Trump's efforts to overturn the 2020 election. Finally, Biden understands that when someone is attacking democracy itself, a different set of rules applies from the norm, and if you do not find ways to effectively thwart the threat, nothing else will matter.

Jesuit Fr. Matt Malone, the editor of America, has announced he is stepping down at the end of the year. This is a surprise for most of us, and it will be interesting to see what the journal does now. Will the next editor be a Jesuit or will they reach into the ranks of the laity?

Last week, I wrote about the Catholic Extension Society's conference and referenced a keynote address given by Jesuit Fr. Allan Figueroa Deck. Several people asked if the text had been posted and I am happy to report Deck has now done so. It can be found here and I highly recommend it.

At Letters from an American, Heather Cox Richardson rightly explains that the recently released memo by Republican lawyer John Eastman, a Trump adviser and senior member of the Federalist Society, proves that the mob violence on Jan. 6 really was intended to try to persuade Vice President Mike Pence to overturn the Constitution and reinstate Trump as president. The subsequent silence by most Republicans is shocking.

In The New York Times, Robin Kaiser-Schatzlein looks at one of the principal reasons wealthy families keep increasing their wealth by exponentially larger margins than the rest of us: 1,007% since 1983, according to a new study, compared to a 93% increase for the typical family. One of the culprits? The "stepped-up basis" loophole in the tax code that washes away the accrued tax liability on investments left to an heir. The Ways and Means Committee left the loophole in place, but Congress should strip it out.

Also in The New York Times, Bret Stephens profiles Congressman Ritchie Torres, a young Latino politician who spends less time in the limelight than his famous colleague Alexandria Ocasio-Cortez, but who may be more in touch with the needs of his constituents.

At the Texas Politics Project, Jim Henson looks at Trump's continued ability to drag the GOP down a rabbit hole on the issue of fraudulent elections. Where is George Orwell when we need him? Henson also teases that he will be looking at the redistricting process in the Lone Star State in coming weeks. This will be the most important, largely under-the-radar political story of the next six months and few states are more important than Texas in how they apportion their congressional districts.

When The Onion is good, it is really good: "EU Honors Angela Merkel’s Tenure By Giving Her Greece."