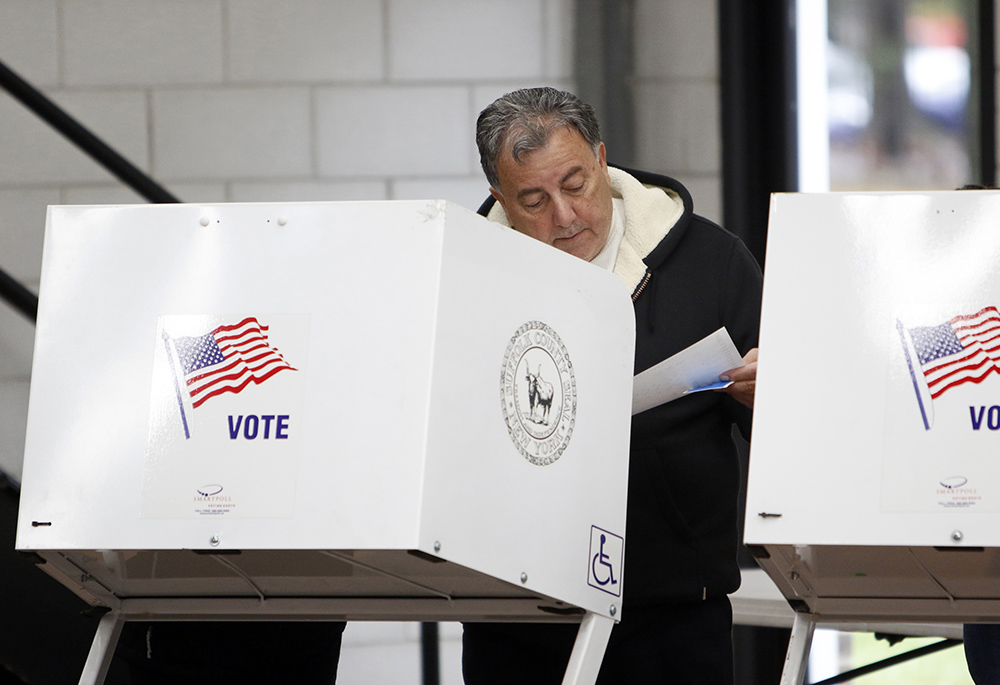 A man reviews his ballot at a polling station in Nesconset, New York, on Election Day Nov. 6, 2018. (CNS/Gregory A. Shemitz)

In The Washington Post, Dan Balz and Marianna Sotomayor deliver a "big picture" assessment of what is driving the midterm elections. They note that seven of the last eight elections have been "change elections" in some meaningful way, which points to some deeper challenges to our democracy. The list of particulars for 2022 are not surprising: Inflation, exhaustion from fighting COVID-19, disgust with political stalemate in D.C., all top the list. Some Democrats think the politics of abortion will come to their rescue, but the districts where they need to hold on to embattled seats are not uber-liberal districts and the party's extremism on the issue may hurt Democrats, not help them.

Also, in The Washington Post, a report on voter turnout in the primaries in Georgia, where 800,000 people have already cast ballots, three times the number of people who voted in the last midterm primaries. This turnout comes despite a new law that restricted voting access, for example, banning in-person early voting on Sundays when "Souls to the Polls" efforts were conducted. One of the iron laws of politics, seen here and in the reaction to the imminent overturning of Roe, is: People will fight if you try and take away something previously afforded to them as a right.

At the politics blog "Mischiefs of Faction," Catholic University politics professor Matthew Green analyzes to what degree Donald Trump's endorsements of GOP candidates in the primaries are determinative. The short answer: In some cases, the endorsement matters, especially in a multi-candidate field with no obvious front-runner; but an endorsement alone won't save a bad candidate. Last week, one of Trump's candidates for Congress in North Carolina and his choice for governor in Idaho both lost, and his choice for Senate in Pennsylvania is in a nail biter. Still, as long as people think Trump's influence is great, that influence is substantial.

At Politico, Natalie Allison examines one particular example of the effects of a Trump endorsement — and of his decision to rescind an endorsement! In today's Alabama's GOP Senate primary, Trump originally endorsed Rep. Mo Brooks, one of the leaders in the effort to overturn the 2020 election, but later withdrew the endorsement. Brooks plummeted in the polls but a series of attack ads targeting candidate Mike Durant, who benefitted from Brooks' decline, have scrambled the race and Brooks is rising in the polls again. A good reminder that primary contests are always subject to a variety of forces.

In The New York Times, a look at the current political crisis in Israel, where a member of the governing coalition resigned from the government, then rejoined it. Given the fact the government holds the narrowest of margins, the resignation of Ghaida Rinawie Zoabi, a Palestinian member of the left-wing Meretz party, would have brought down the government and caused new elections. In parliamentary governments, the coalition building happens after the elections, whereas here, the coalition building happens within the two major parties during primary season. Both methods have definite advantages over the other — and disadvantages.

At Christianity Today, Russell Moore reflects upon the newly released report from the Southern Baptist Convention about the group's cover-up of sexual abuse allegations over many years and in many instances. He writes that, "as dark a view as I had of the SBC Executive Committee, the investigation uncovers a reality far more evil and systemic than I imagined it could be." Moore has proven before that he is willing to stand up against some powerful forces within his own religious tradition and here his analysis is powerful in both its analysis and its empathy. And the report proves that efforts to blame the Catholic sexual abuse crisis on homosexuality or on a celibate clergy were misplaced.