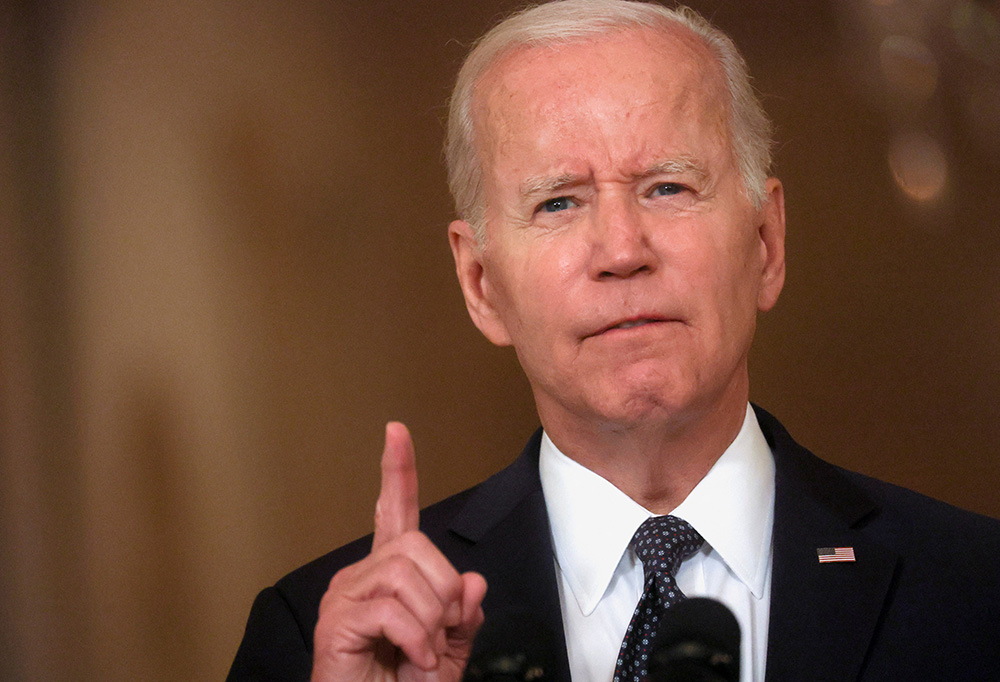 President Joe Biden speaks about gun violence during a primetime address from the White House in Washington June 2. (CNS/Reuters/Leah Millis)

At Politico, Jonathan Lemire writes that President Joe Biden is "seething" because his poll numbers are lower than former President Donald Trump's were at this point in Trump's presidency. But, according to a report in The Washington Post, it was the Biden White House that blew up its delicate negotiations with West Virginia Sen. Joe Manchin last December, sinking the "Build Back Better" agenda that night have eased the economic pressure facing the president. Physician, heal thyself. Biden needs to get Manchin on board a renewed effort to at least restore the Child Tax Credit that reduced child poverty significantly, helping millions of working-class families make ends meet.

At The Hill, Catholic University of America's John White says the secret to Biden improving his political standing is for the administration to "Let Biden be Biden." Being prone to gaffes is not as big of a problem as being overly scripted and appearing inauthentic.

At the Texas Politics Project of the University of Texas at Austin, Jim Henson looks at how the Texas government is responding to the Uvalde massacre. His conclusion is not encouraging:

The ways that the current political leadership has handled gun policy in the wake of multiple mass shootings and other less publicized examples of gun violence over the last six years is a symptom of the erosion of the overall political system. The current state of politics and governance in Texas has inculcated habits and norms in the current generation of political leadership shaped by a sustained period of one-party rule increasingly dominated by an [sic] narrow coalition of Republican elites and the reactionary partisans whose opposition in primaries is to be avoided at all costs — even if those costs include declines in public safety and public health.

Depressing, but also not likely to change anytime soon.

I have read this essay a few times, and I am still not sure what to make of it. Yuval Levin, in The New York Times, is undoubtedly correct that our political leaders need to leave the stage and make room for some new blood. His criticism of the "pocket sociology of our time" is well founded even though he at times commits the sin he identifies: "Generational analyses are unavoidably sweeping and crude, and no one is simply a product of a birth cohort." But I am not sure history yields to a change of generation so much as to a change of ideas, or at least a changed framework for our ideas.

Yale News has a lovely story that looks at a new essay containing remembrances of pioneering bioethicist James Gustafson, the man most credited with bringing together the science and the morality that, together, created this new field of study. His many students included Stanley Hauerwas, Jim Childress and other "luminaries" in the field. Gustafson also invited Paul Ramsey to deliver a major lecture at the Yale Divinity School which, in turn, formed the basis of Ramsey's seminal book The Patient as Person. "I always wondered what was in that pedagogical sauce," observed one of the co-authors of the essay, Dr. Joseph Fins.

A friend sent me a link to a website I had never encountered, Heuermontage, and an essay there about "agnotology." Yes, yes, we all had to look it up in the dictionary! It refers to the study of ignorance not so much as the failure to impart learning but as the interference with learning to impart false information. An interesting read, but I wish the author had included some examples from the left. They abound, too!

Montreal is well known for its beautiful churches, the charming buildings of McGill University, and the "old country" feel of Old Montreal with its narrow, cobblestone streets. But The Washington Post recently called attention to some of the city's modernist masterpieces, many of which are associated with the 1967 Expo held on two islands in the St. Lawrence River. Strangely, the piece does not mention the Olympic stadium and velodrome from the 1976 games held in that city, both of which are also outstanding architectural achievements.

This past weekend it was difficult to avoid coverage of Queen Elizabeth II's Platinum Jubilee. My Irish American soul is mighty glad we cut ties with the British Empire when we did. Still, no one tops the Brits for outstanding musical propaganda, of which "Rule, Britannia" remains the outstanding achievement. Here it is sung at the 2009 Last Night of the Proms by Sarah Connolly.