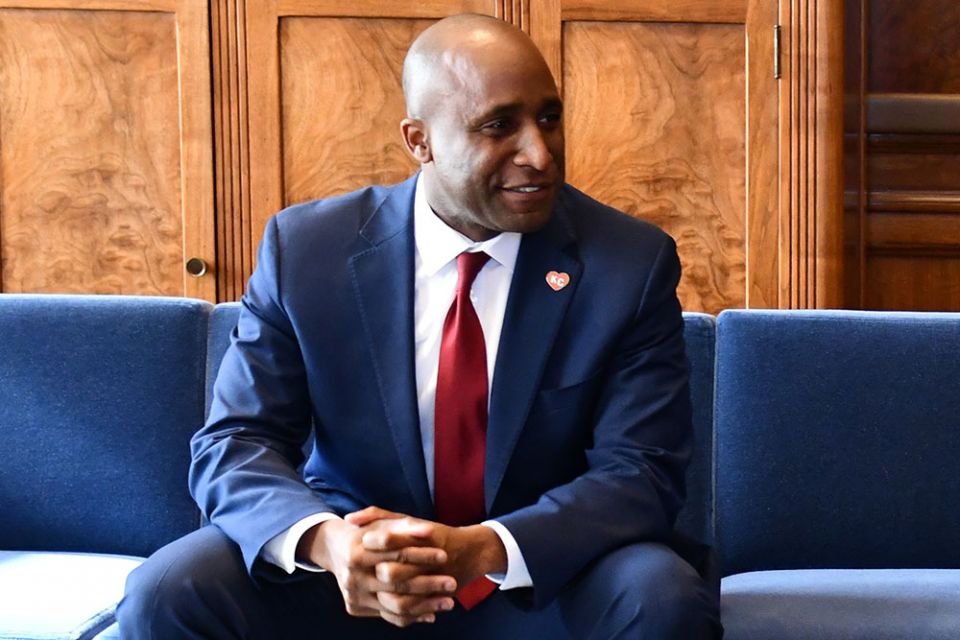 Cardinal Pietro Parolin, call your office. Why is Fr. Roger Landry, a priest who works at the Vatican embassy to the United Nations, in a video for the right-wing CatholicVote.org? The group has both a 501(c)(3) and a 501(c)(4) component, that is, part of the organization is a political action committee, or PAC, that makes political donations to candidates, and clergy are well advised to steer clear of such partisan activities. But it is the sinister and tendentious way they present issues that is really alarming. If lay Catholics want to buy into this nonsense, that is fine. But clergy? Who serve as diplomats for the pope? I would add in passing that Landry's video is standard, neocon fare, pablum for people who want to feel persecuted while making six figures. Landry schooled a good friend in the faith when she was received into the church, so I know him to be capable of better than this.

I seem to have missed this when it first came out, and thank a reader for calling it to my attention. In The New York Times, opinion writer Christopher Caldwell uses a new book by French political theorist Chantal Delsol to launch a discussion around the question: Is the West becoming pagan again? It is more accurate to say that paganism always persisted within one half of Christian theology, the idea that God is immanent in the world. That idea was once better balanced by the idea that God also transcends the world. In any event, it is an interesting read.

Interesting in a different, pernicious kind of way is Mary Eberstadt's latest article in First Things. (The article is adapted from a speech to the Napa Institute.) She begins:

Solzhenitsyn famously defined the principal trait of the twentieth century in four words: "Men have forgotten God." So far, the twenty-first century might be summarized in six: Men are at war with God. Awakened from agnostic slumber by new forms of temptation, chiefly the sexual revolution, humanity is at war with God over a question that reaches back to the beginning of time: Who, exactly, should have power over creation?

If anyone is looking for a contemporary example of Jansenism, just point them to Eberstadt's work. The core problem of modernity, in her eyes, is always the sexual revolution. To paraphrase the great Dorothy Parker, Eberstadt's cultural criticism runs the intellectual gamut from A to B.

In Bloomberg, the Department of Justice announced it will defend the law that allowed Puerto Rico to declare bankruptcy. Two real estate companies and an individual bondholder have challenged the law as unconstitutional. Unfortunately, the Justice Department's action may delay the island's ability to leave the jurisdiction of the bankruptcy court, but it is doubtful the delay will offset the value of finality and free the yearslong negotiations from the threat of additional challenges.

At Politico, an interview with Quinton Lucas, the mayor of Kansas City, Missouri. National Democratic candidates — and strategists — should listen to him: His arguments always have the ring of common sense. He isn't afraid to call out some on his own side of the partisan divide. Nothing inflammatory. A problem-solving tone. I like this guy!

The D.C. courts have many critical vacancies and the Senate has been blocked from confirming nominees by Republican intransigence. "I have absolutely no faith that Joe Biden's radical far-left nominees will uphold the rule of law," said Sen. Rick Scott, Republican from Florida, when he objected to a unanimous consent motion to confirm the nominees. The problem is these judges are nominated by an independent panel, not by President Biden. Truculent? Stupid? Both? The Washington Post has the story.

From the website Wallpaper, a look at the list of winners for their "Best New Public Building" awards, some of which are quite beautiful, especially the overall winner, the Temple of Steps in Andhra Predesh, India. The only U.S. building to make the list is the U.S. Olympic and Paralympic Museum in Colorado Springs.