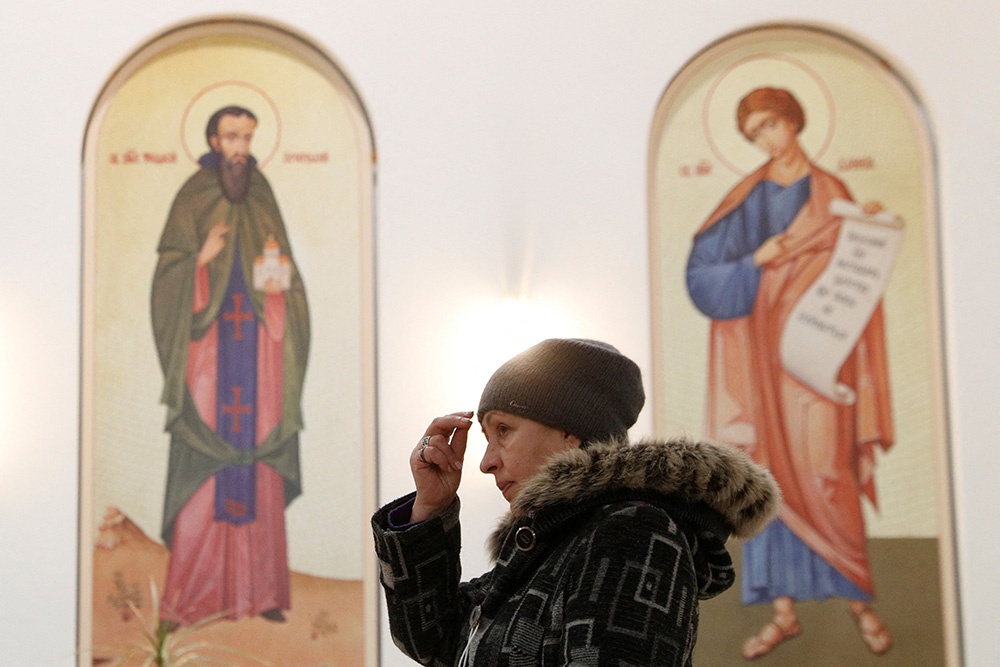 A believer attends a liturgy at the Ukrainian Greek Catholic Cathedral of the Resurrection of Christ in Kyiv, Ukraine, Jan. 26. (CNS/Reuters/Valentyn Ogirenko)

In The Washington Post, journalist Olga Tokariuk writes about coming of age with a free and independent Ukraine, and the determination of her generation to resist Vladimir Putin's threats and annexations. "We have a lot to lose," she writes. "Most people don't stop very often to think about independence and sovereignty, but those things were hard-fought achievements." It is good to remember that while thugs like Putin and Viktor Orban and Donald Trump abuse nationalism, the idea at its roots, that a people qua people have the right to self-determination, is a noble and a liberal one.

Relatedly, and also in the Post, Russian officials are accusing the U.S. of "scaremongering," and "doing everything possible to fan the flames of conflict." This is like Fox News' Laura Ingraham accusing Joe Biden of "dividing America," a classic example of muddying the waters by accusing one's opponent of the bad deed the accuser is actually doing. Biden and his team should look to history for a good way to confront this disinformation: Adlai Stevenson's famous showdown with Soviet Ambassador Valerian Zorin at the United Nations during the Cuban Missile Crisis.

In The New York Times, columnist Ezra Klein looks at the reasons the U.S., with all its resources, has fallen behind other countries in preventing the spread of COVID-19, and it won't surprise that the problem is not in the stars, but in ourselves. Our polarization and lack of solidarity are the culprit, leading to the question Klein poses: "What does good pandemic policy look like for a low-trust, high-dysfunction society?" He concedes that the lack of social solidarity is here to stay, and it is hard to believe otherwise. But as I've said before, if more Americans subscribed to Catholic social doctrine, we would not have just buried more than 900,000 of our fellow citizens due to COVID-19.

It turns out, nonclerical hierarchies are not immune from the kind of hubris that once characterized that of U.S. bishops when faced with allegations that they gravely mishandled charges of sex abuse. Chicago Blackhawks owner Rocky Wirtz lashed out at reporters when they asked about how the organization was dealing with charges leveled by former player Kyle Beach that he was abused by his coach Brad Aldrich. Just appalling.

At Axios, Russell Contreras reports on these repulsive new laws in which politicians interject themselves into school curriculum, limiting the way certain issues, especially racial issues, are taught. The whole effort amounts to book burning without the flames. The outstanding comment came from University of Connecticut history professor Manisha Sinha: "These laws supposedly protecting white students from guilt say more about the authors of the law than the students. There's no reason why a white student can't identify with the abolitionist or the civil rights leader rather than a slaveholder." No reason at all. It makes you wonder if the legislators who support these laws may have trouble identifying with the abolitionist, which tells you all you need to know.

Kudos to Mark Silk at Religion News Service for defending schadenfreude after Jesuit Fr. Jim Martin criticized it in a New York Times op-ed. Silk points to Psalm 23: "Thou preparest a table before me in the presence of mine enemies." And he makes the larger point that especially in the case of exposing hypocrites, at least a little schadenfreude serves a good purpose.

With all the problems facing our troubled world, it is easy to forget that our cultural heritage must be preserved as well as our environment. The good people at UNESCO have updated their list of the 52 World Heritage Sites that are most in danger of damage from climate change, war and other dangers.