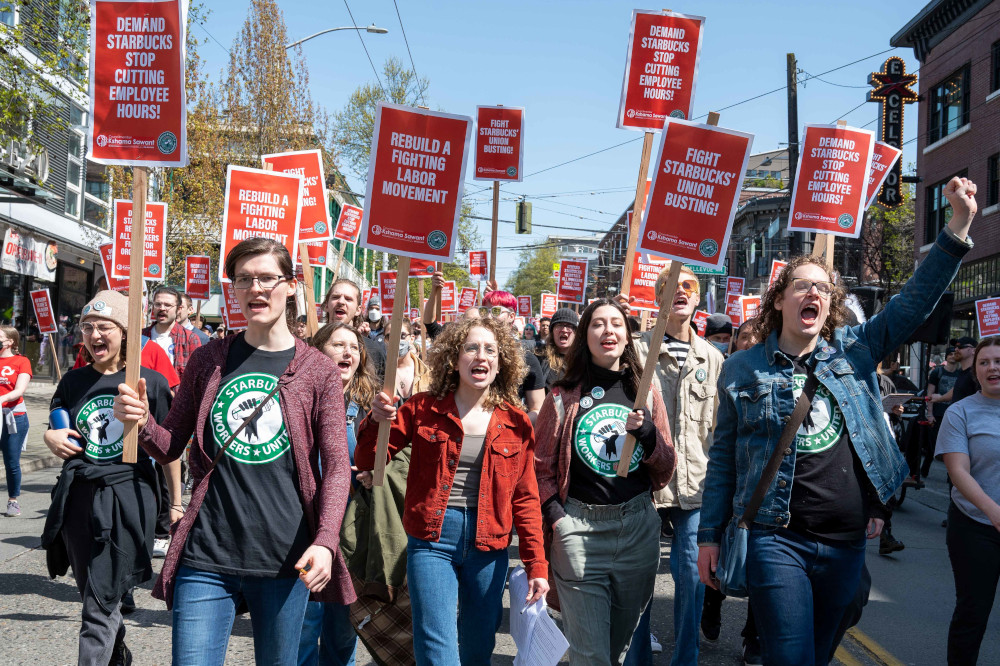 Starbucks workers march for the right to organize a workers' union on April 23 in Seattle. (Wikimedia Commons/elliotstoller)

Watching the first round of French parliamentary election results is dizzying. The really good news is that the National Rally party of far-right populist candidate Marine Le Pen, who made it to the second round in the presidential race earlier this year, bombed and is likely to emerge from the second round of voting with a few dozen seats. An alliance of parties on the left did much better and are set to gain 150 to 210 seats after the second round of voting, which is good news but it looks like they will not win enough seats to deny newly reelected French President Emmanuel Macron a majority of seats. The New York Times has the results.

Perfect Union, a website that covers labor activities, reports that Starbucks CEO Howard Schultz stated he will not deal with unions. That blunt statement is the first time a Starbucks executive has not stated they would bargain in good faith with the unions and it might violate the National Labor Relations Act. What is really galling is Schultz' continued reference to a union as a "third party" to his company's operations. A union is not a third party. It is one of two parties, only organized. When you drink as much coffee as I do, the flavor really matters, and I had been brewing Starbucks Sumatra blend for years. I am growing accustomed to Peet's Sumatra and though it is a little harder to find, it tastes just as good!

Forget about overturning Roe v. Wade. The U.S. Supreme Court is also likely to hand down a ruling that could gut the Environmental Protection Agency's ability to enact regulations for combatting climate change. The case could also have ramifications for a host of other federal agencies. The pro-business, libertarian agenda has never been more powerful on the high court than now. Politico has the story.

From Texas Standard, a report on the undercounting of Texans in the 2020 census, where as many as 540,000 people were left off the rolls. Between then-President Donald Trump's warning against counting undocumented Americans, and the pandemic, conducting the census was tricky, but states like California spent money to ensure no one was missed. Texas drank the Trump Kool-Aid, and the undercount translates to a loss of $19 billion, with a b, in federal funding over the next 10 years until a new census is undertaken. Democrats in the Lone Star State should be running on this issue.

From the Church Life Journal at Notre Dame University's McGrath Institute for Church Life, Jessica Keating cuts through some of the tendentious language about abortion, and finds some great Walker Percy quotes on the abuse of language surrounding the issue. She rightly points out that when Iceland declares itself free of Down syndrome, and not through a cure but through abortion, that is not an achievement; it is a moral and cultural disaster.

Blessings on Dissent magazine for reprinting an essay by Irving Howe, first published on January 1, 1954, entitled "The Age of Conformity." There is much in it with which I disagree, but this insight seems truer today than it was back then:

Statiﬁcation, war economy, the growth of a mass society and mass culture — all these are aspects of the same historical process. The kind of society that has been emerging in the West, a society in which bureaucratic controls are imposed upon (but not fundamentally against) an interplay of private interests, has need for intellectuals in a way the earlier, "traditional" capitalism never did. It is a society in which ideology plays an unprecedented part: as social relations become more abstract and elusive, the human object is bound to the state with ideological slogans and abstractions — and for this chore intellectuals are indispensable; no one else can do the job as well. Because industrialism grants large quantities of leisure time without any creative sense of how to employ it, there springs up a vast new industry that must be staffed by intellectuals and quasi-intellectuals: the industry of mass culture. And because the state subsidizes mass education and our uneasy prosperity allows additional millions to gain a "higher" education, many new jobs suddenly become available in the academy: some fall to intellectuals. Bohemia gradually disappears as a setting for our intellectual life, and what remains of it seems willed or fake.

Brilliant. Those final, damning adjectives are so, so spot-on.

Need something heartwarming in these dark times? When the great Julie Andrews received a lifetime achievement award from the American Film Institute, five of the actors who played the Von Trapp children in "The Sound of Music" reunited to celebrate with their famous on-screen adopted mother. The Daily Mail has the story.