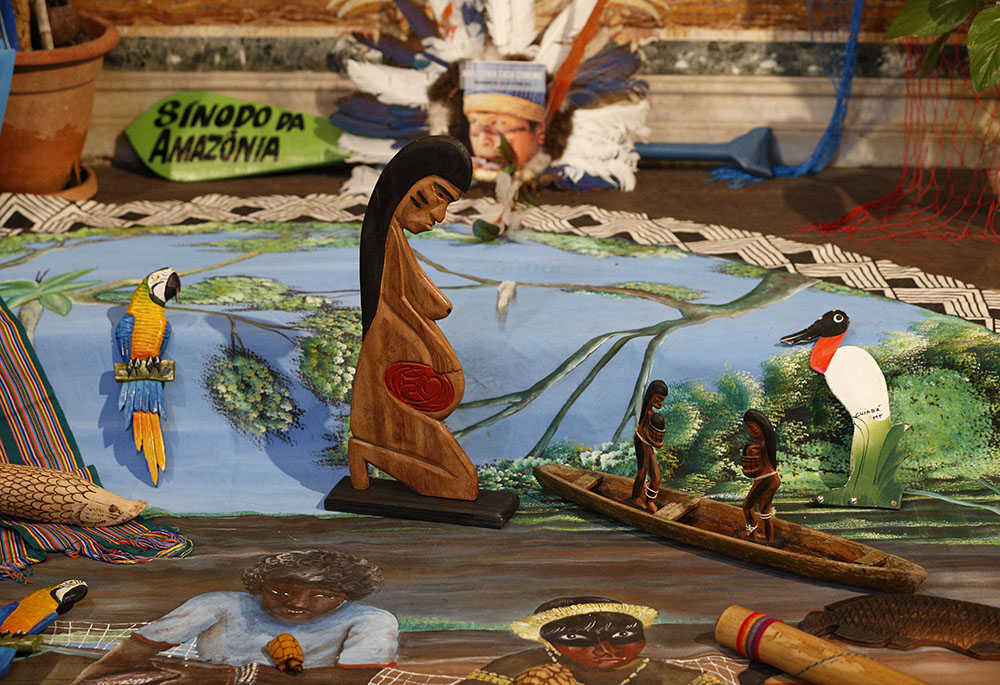 A wooden statue of a pregnant woman, often referred to as "Pachamama," is pictured in the Church of St. Mary in Traspontina as part of exhibits on the Amazon region during the Synod of Bishops for the Amazon in Rome Oct. 18, 2019. Several copies of the statue were stolen from the church and thrown into the Tiber River Oct. 21, 2019. (CNS/Paul Haring)

What caused the pandemic? Don't ask Dr. Anthony Fauci. Ask the editor-in-chief of Crisis magazine, Eric Sammons, who thinks the cause of all this suffering was Pachamama. "I believe that the Covid pandemic and the horrific response to it were directly caused by the veneration of this pagan idol in the Vatican by prelates, priests, and lay people. In October 2019 a false idol was set up in the heart of the Catholic Church, and soon after all hell broke loose on earth." Well, there it is. Why didn't I think of that?

At Politico, a report on a different conspiracy and how it is ripping the Wisconsin Republican Party apart. David Siders explains that a new gubernatorial candidate not only believes Trump won Wisconsin in 2020 — he didn't — but that it is still possible to overturn the election and reinstate Trump in the White House. Pillow salesman Mike Liddell was at the candidate's campaign kick-off, which always instills civic confidence in me. This mess couldn't happen to a nicer party.

From the Sacred Heart University blog "Go, Rebuild My House," St. Paul University in Ottawa professor Catherine Clifford offers her perspective on the badly misnamed "freedom convoy" that has shut down the normally pacific city she calls home. She puts her finger on the central difficulty with arguments offering religious justification for the anti-vaxxers: "Those claiming to fight for 'freedom of choice' are, in fact, quite free. There are no 'forced' vaccinations here. But choices have consequences." We should all start calling such protests by their proper name: Irresponsibility convoys.

In The New York Times, Senior Writer David Leonhardt explains why the possible invasion of Ukraine by Russia is qualitatively different from the kinds of wars the world has witnessed in the past 80 years. I am not sure I agree with all of his particulars, but his central point is correct and frightening: The prospect of military powers extending their national boundaries through brute force is chilling, both in Ukraine and in Taiwan.

At The Hill, a new report indicates that by the end of the century, if the world has not confronted the climate crisis with the commitment required, only one of 21 previous venues for the Winter Olympic Games — Sapporo, Japan — would be able to guarantee reliably safe and fair snow conditions needed to host the games. (NB: Oddly, the article does not name Sapporo, but it offers a link to the study that does.)

In The New Yorker, editor David Remnick interviews Henry Louis Gates Jr., and discusses everything from growing up in West Virginia to his influence on the establishment of a literary canon of African American literature. Gates has lived an extraordinary life and it shines through here as the two old friends converse. He also displays an acute, and somewhat rare, awareness that there is diversity within groups, not just among them.

In the The Atlantic, Gary Kamiya looks at the reasons San Francisco voters, where Republicans are not a factor, voted to remove three board of education members who had supported things like removing the names of George Washington and Abraham Lincoln from public schools. Conservative Republicans are abusing the result to support their ridiculous ideas about education, but they are less out of step than the Democrats. As Kamiya observes: "At a minimum, the recall demonstrates that 'woke' racial politics have their limits, even in one of the wokest cities in the country."

At Architecture Daily, a series of articles that look at the different ways cities repurpose Olympic venues, assessing whether or not hosting an Olympics is worth it, how not to host the games, and other issues related to urban design and architecture. The article that looks at the "two legacies" of the Rio Olympics in 2016 is especially well done, examining the way some projects served broader social needs like improving transportation, while others seemed to mostly benefit real estate developers.