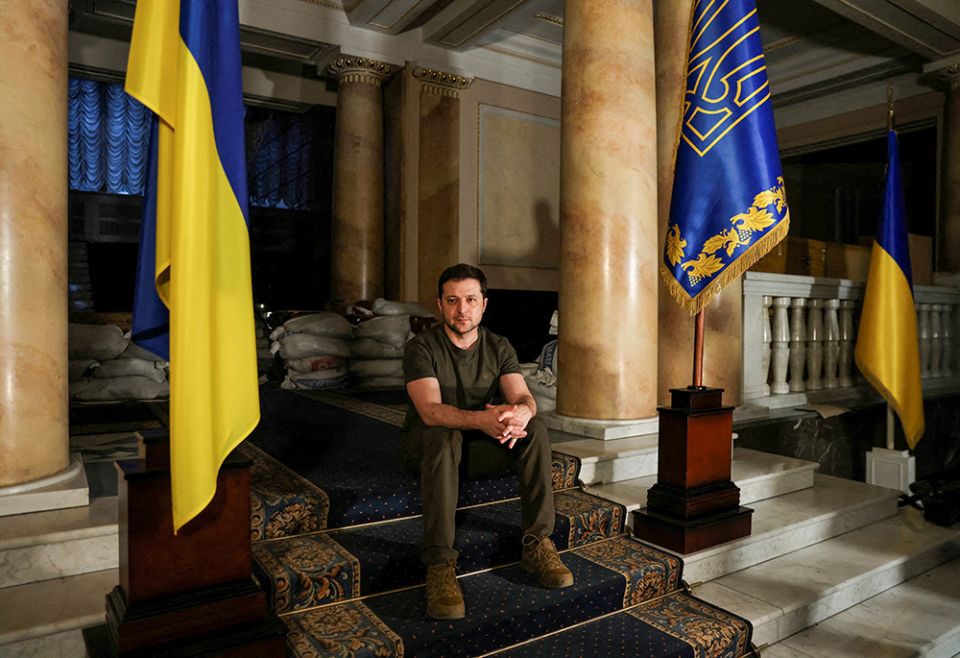 Richard Hofstadter of Columbia University published his famous essay "The Paranoid Style in American Politics" back in 1964, in The Atlantic. Were he still with us, Hofstadter would have surely included this LifeSiteNews essay about Ukraine's president among the "leading episodes in our past history in which the style emerged in full and archetypal splendor." In it, Jack Bingham links President Volodymyr Zelenskyy with "global elites" like Canadian Prime Minister Justin Trudeau because both have participated in the World Economic Forum and Zelenskyy once tweeted that Trudeau inspired him to get into politics. The horrors.

At Detroit Catholic, Dennis Sadowski of Catholic News Service reports on Jubilee USA's call to restructure Ukraine's sovereign debt. Jubilee USA Executive Director Eric LeCompte warns that Ukraine could default on its loans this year, as it scrambles to find money to purchase weapons and alleviate the suffering caused by the war. Here is an example of Christian solidarity, of doing what we can, within the areas of our expertise, to help the brave nation of Ukraine. All can do some, and some can do a lot.

John Bolton, who served as Donald Trump's national security adviser, went on the far-right network Newsmax where the host, Rob Schmitt, tried to argue as many Republicans do, that former President Donald Trump was tough on Russia, and that his toughness kept Putin from invading earlier. Bolton corrected him: "The fact is that he [Trump] barely knew where Ukraine was." This illustrates two things. First, Republican efforts to blame Biden's alleged weakness on the foreign stage for the invasion is exposed as nonsense. Second, the desire to be close to power remains the most dominant trait of Washingtonians: Why is Bolton only telling the rest of us about Trump's ignorance and wrong-headed values now? The Washington Post has the story.

In The New York Times, Henry Louis Gates Jr. of Harvard University and Andrew Curran of Wesleyan University argue that our society needs a new language for discussing race. The article previews a forthcoming book in which they examine an 18th-century episode in which science was invoked to define race in biological terms when race is really a social construct. In addition to sketching a wise and hopeful view about a new language on race, the essay is a useful reminder that science can be abused when it is invoked in non-scientific argumentation. When people discuss, for example, the need for public health measures to combat COVID-19, and they say, "Follow the science," we all nod, and appropriately so. But we should remember that eugenics was — and is! — presented with a veneer of science too.

At Politico, Elena Schnieder and Christopher Cadelago report that the Democratic Party is realizing it needs to spend resources and attention on retaining key governorships in swing states like Michigan and Wisconsin. Anything that gets the attention of the party away from Washington and into the hinterlands is a good thing per se. And those governorships may prove critical to the ability to ensure a fair election in 2024 as well.

Also at Politico, Nick Niedzwiadek and Eleanor Mueller profile U.S. Secretary of Labor and former Boston Mayor Marty Walsh. A former leader of the building trades in Boston, Walsh may be the finest labor secretary since Frances Perkins. Like her, he is serving at a time of labor unrest and economic disruptions, and his ability to resolve contract disputes at ports on the West Coast, and the less consequential but equally high-profile Major League Baseball contract dispute, could catapult him into the national spotlight. Isn't it interesting that Walsh, again like Perkins, is deeply influenced by Catholic social teaching!