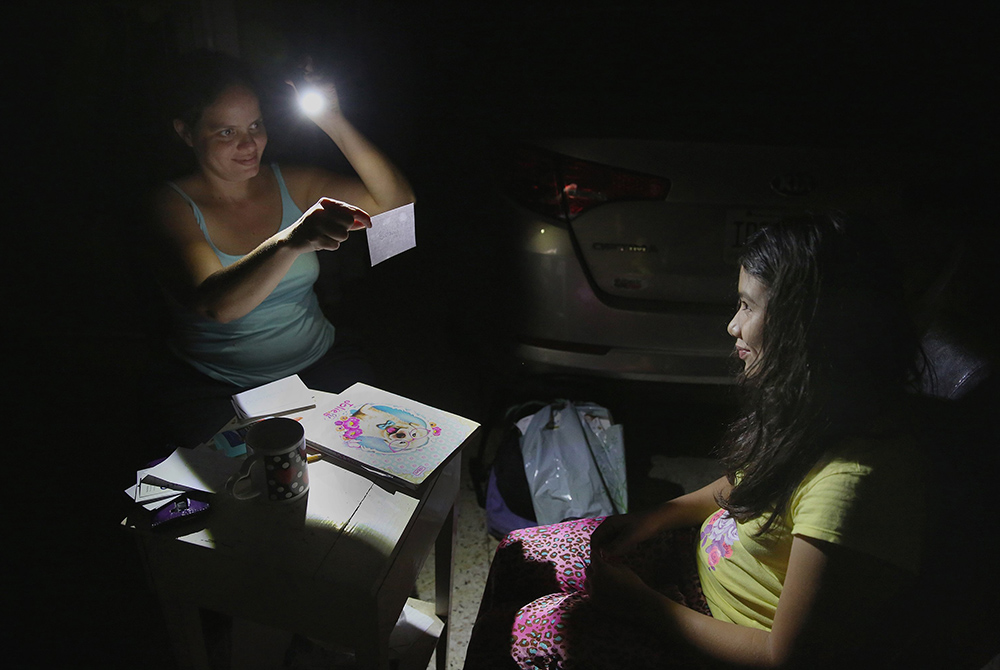 In this 2017 file photo, Margarita Rodriguez holds a flashlight as she quizzes her 11-year-old daughter Isel Martinez on homework outside their home in San Juan, Puerto Rico. (CNS/Bob Roller)

From The Associated Press, Puerto Rico continues to be afflicted by power outages that threaten the health and education of its citizens, to say nothing of crippling an economy that was already on the ropes after more than a decade of recession combined with natural disasters. A new international conglomerate has taken over control of the island's energy infrastructure and they don't seem to have a handle on it. What is worse, they plan to rebuild the fossil fuel-based grid, which requires lots of vulnerable infrastructure, rather than pursuing a 21st-century, more localized and sustainable energy grid, as Ruth Santiago points out in the Miami Herald. Where is the Biden administration on this one?

From Politico's "Big Idea" series, constitutional law professors John Kowal and Wilfred Codrington III argue that constitutional amendments usually come in groups, after a period of political volatility, and that we may be approaching a similar period now. Theirs is an interesting thought experiment but, of course, history is the one thing that does not actually repeat itself.

At CNN, Ron Brownstein explains why the Senate is broken: Neither party is likely to win a 60-vote majority and individual senators are less and less likely to cross the aisle and work with members of the other party on important legislation. The result of the two trends is stalemate. Before rushing to criticize Senate moderates who remember when the chamber worked well, we should remember that they are at least half right: The current situation represents a decline in the quality of government.

At Religion News Service, Mark Silk continues his effort to encourage us to use the pronoun "they" about God. Alas, his solution is worse than the problem. Yes, God transcends our human concepts of gender, but if overcoming the limits of our gendered language requires us to obfuscate the most central part of the self-revelation of God to his people Israel — that God is one — we need to find other ways to teach the next generation that God transcends gender.

At The Critic, Norman Lebrecht laments the lack of middle-aged conductors capable of filling the shoes left by the likes of Muti and Barenboim. (He gives a passing shout out to Yannick Nézet-Séguin, who led the Met in its recent, masterful performance of Verdi's Requiem, and two other middle-aged conductors, but concludes that apart from them "the middle-aged shelf is bare." Ouch.) Lebrecht once predicted that "the great conductor has paved the way to his own extinction," and he fears that prediction is coming true. But then he offers a sketch of six conductors, all of whom are under 40, none of them from America or Russia, whom he thinks could prove his prediction wrong and herald a new era of great philharmonic leadership. Lithuanian Mirga Gražinytė-Tyla, who is only 35, tops the list. She now lives in Salzburg and served a year's apprenticeship with Gustavo Dudamel. Klaus Mäkelä from Finland leads the Orchestre de Paris and he is only 25! It will be fascinating to watch how these young conductors grow.

At Travel Away, a list of the 10 best cities in the U.S. for architecture lovers. It is interesting that Santa Fe is the only small city on the list, while others such as St. Augustine, Florida, or Ann Arbor, Michigan, might be included. Also, I am sad to say, New York and Boston have declined in recent years, allowing the construction of ugly skyscrapers with little character and no beauty. Still, these kinds of lists are always fun and get you thinking what cities would be on your list.