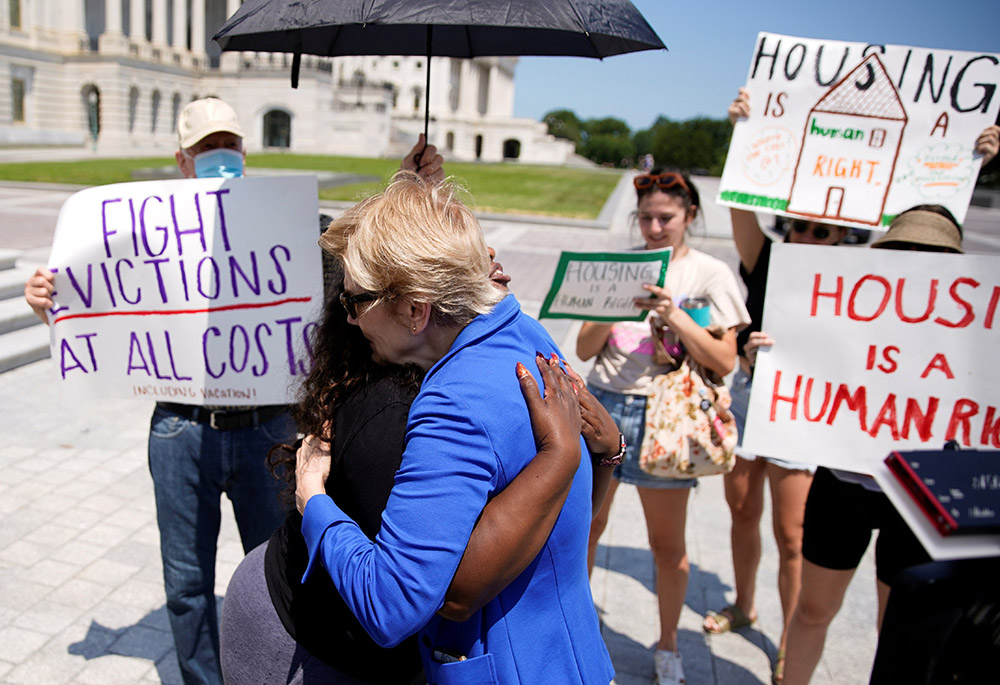 U.S. Rep. Cori Bush, D-Mo., and U.S. Sen. Elizabeth Warren, D-Mass., embrace July 31, 2021, in front of the U.S. Capitol in Washington after Warren arrived to support Bush, who spent the night there to highlight the midnight expiration of the pandemic-related federal moratorium on residential evictions. (CNS/Reuters/Elizabeth Frantz)

In The New Yorker, Isaac Chotiner interviews Michael Kazin about his new history of the Democratic Party. Kazin always has smart things to say, and his diagnosis of some of the problems the Democrats face today ring true. But I wish to call attention to his opening comment about history: "First of all, I think institutions really matter and historians don't write enough about them." Amen.

At The Hill, politics professor John Kenneth White of the Catholic University of America predicts a Republican sweep this autumn, but that their anticipated victory shouldn't be seen as a "prelude" to GOP dominance the way the 1894 and 1934 midterm elections were. Nor does he think it will necessarily be an "interlude" election, akin to midterms in 1946 and 1982 when the party that did not control the White House won control of Congress, but the presidency was beyond reach for the next few cycles. Instead, White concludes, the parties are in a kind of standoff.

In The New York Times, Sen. Elizabeth Warren urges her fellow Democrats to get to work passing much-needed legislation if they are to avoid getting clobbered in the midterms. She writes:

Beefing up regulators' authority to end price-gouging, breaking up monopolies, and passing a windfall profits tax is a good start. Only in Washington, where America's biggest companies spend billions to drown out reality, are these controversial ideas. Across America, these are popular plans.

I hope her colleagues from Arizona and West Virginia are listening, as well as the president! The Democrats need to put a few more wins on the board.

At New Jersey Insider, a report on A.J. Oliver who was pushed out of his job as chair of the Morristown Democratic Committee because he holds pro-life views. The Democrats for Life of America sent a letter to Democratic National Chairman Jamie Harrison asking if it makes sense to be pushing loyal Democrats out of the party. The question should be rhetorical but sadly there are those who would rather lose to Republicans than tolerate a pro-life Democrat within their midst.

At Politico, author Jeff Greenfield looks to George Orwell's theory that "cranks" among the Socialists explained the party's inability to connect with average working people, and applies that idea to the situation of the Democrats today. "Why is [Orwell's] account, outmoded as some of the language is, relevant to the Democratic Party's condition today?" Greenfield asks. "Because ultimately, too many otherwise persuadable voters have become convinced that Democrats neither understand nor reflect their values." The quotes from Orwell are worth the price of admission, but the larger point is one that, if not faced, will sink the Democrats.

From the Texas Political Project, Executive Director Jim Henson looks at Gov. Greg Abbott's decision to inspect all trucks crossing the border from Texas, which caused major supply chain disruptions. In the context of his reelection effort, however, and the popularity of anti-immigrant extremism among the GOP base, Abbott's upping the ante may cause him little political harm and might improve his image should he run for president down the road.

In the Journal of the American Revolution, Managing Editor Don Hagist does some deep diving to learn what we can about the British soldiers who marched to Lexington and Concord in 1775, engaging in the battle that would ignite the American Revolution. Most surprising to me was the age of the soldiers: Of the 202 men about whom age could be determined, only 38 were 25 or younger while 53 were 31-35 years old and another 40 were 36-40 years old.

From Architecture Daily, a look at a renovated office building in Neuilly-sur-Seine, that not only integrated three buildings but opened up interior and exterior spaces in ways that create a new dynamic space. I love working from home, but I might feel differently if I had an office in a building like this. Just beautiful.