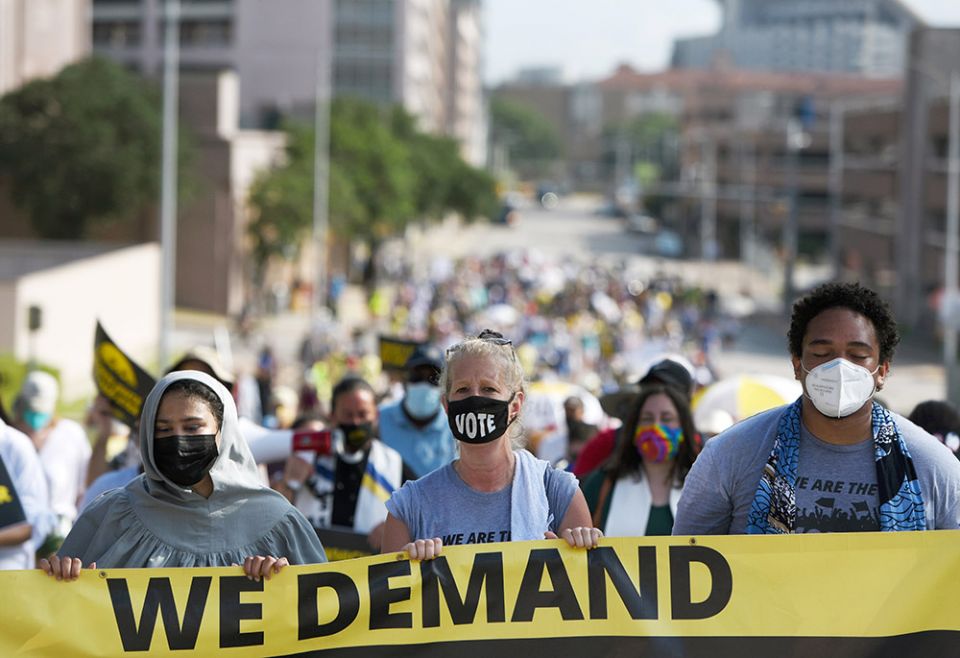 Protesters take part in a July 31, 2021, march in Austin, Texas, for voting rights and against a measure in the Legislature to enact voting restrictions. (CNS/Reuters/Callaghan O'Hare)

For the second time in as many weeks, EWTN's Raymond Arroyo called attention to Pope Francis' removal of Bishop Daniel Fernández Torres from the spiritual leadership of the Diocese of Arecibo, Puerto Rico. On "The World Over," Fr. Gerald Murray called the pope's decision "an unjust removal" and "a tremendous error." Robert Royal called for greater transparency, and I agree, but in my reading of church history, when such a drastic step is taken, it is only after years of trying to set things right, and so greater transparency might end up embarrassing the deposed bishop. It is a hallmark of this pontificate that he does not like to humiliate people. Arroyo and his "papal posse" should be careful about what they wish for.

In The Washington Post, columnist Paul Waldman looks at the results from Texas' primary, the first election to be conducted under a new law that Republicans enacted making it much harder to vote by absentee ballot. The results are shocking. Statewide, 13% of mail-in ballots were rejected. In Harris County, home to the state's largest city Houston, the figure was 19%. By way of comparison, in the 2020 election, only 0.8% of mail-in ballots were rejected nationwide. If this isn't voter suppression, what is it?

In the Chicago Sun-Times, a look into text messages exchanged between Chicago Cardinal Blase Cupich and Illinois Gov. J.B. Pritzker. The messages show two public figures working together to protect public health and safety, in short, living out both the Catholic Church's teaching on protecting human life and on the role of government and civil society in working for the common good. Can't wait to see how our conservative friends spin this!

At the Catholic Spirit and from Catholic News Service, the Catholic and Anglican archbishops of Armagh, Ireland, issued a joint statement for St. Patrick's Day, calling attention to the war in Ukraine and the lesson they draw for their own people. "We have to learn here on this island from Ukraine about the importance of continuing progress in peace, dialogue and diplomacy," the archbishops wrote. "We should never take peace for granted." Indeed.

In the Pittsburgh Post-Gazette, a report on this weekend's candidate forum for the Democratic candidates for the open Senate seat in Pennsylvania. There is no good reason a Democrat can't win in the Keystone State, but at the forum they were falling all over themselves to support abortion rights, which may be necessary to win the primary but could prove deadly in the general election. Of all the Senate races this year, I suspect the result in Pennsylvania will be the one that most shapes the 2024 contests.

The New York Times' editorial on free speech, unsurprisingly, relied on a conception of negative freedom, or freedom from. The limits of such a conception should be obvious to all students of Catholic social doctrine. And there could have been more attention given to the fact that restrictions on speech are typical of the right, but unnatural to the left. Still, if the comment section and Twitter are any guide, the hysterical reaction illustrated the degree to which many on the left unwittingly give ever new evidence of the psychological truth expressed by Queen Gertrude in Shakespeare's masterpiece Hamlet: "The lady doth protest too much, methinks."

Liberal legal scholars, and even more so Catholic theologians, have been scratching their heads at the bizarre ruminations of integralists, such as Harvard law professor Adrian Vermeule, who think it is time to reunite throne and altar. But it is even more delicious to see a conservative legal scholar like Stanford's Peter Berkowitz take on Vermeule. In a review of Vermeule's Common Good Constitutionalism, published at the conservative Washington Free Beacon, Berkowitz writes:

He illuminates the dependence of the American political order on principles of justice nowhere explicitly laid out in the Constitution but clarified in classical works of political philosophy, jurisprudence, and theology. All the while, however, he obfuscates the modern tradition of freedom, which decisively shapes the political morality that gave birth to and sustains the Constitution. It is one thing to argue that we have diminished our moral resources by abandoning America's classical and biblical heritage. It is quite another to banish to the shadows of the American tradition the political morality of limited government and its cornerstone conviction that human beings are by nature free and equal — a distinctive interpretation of the dignity inherent in our humanity linked to, but not asserted by, the classical philosophers or the Bible.

Two weeks from today, I shall be at the University of San Diego to discuss Catholics and politics, and specifically the reduction of religion to politics in U.S. culture. The event is sponsored by the university's Frances G. Harpst Center for Catholic Thought and Culture and will be open to the public, Tuesday, April 5, 4 to 5 p.m. More information can be found here.

Links: EWTN radio affiliate offensive on MLK; greed in US health care; 'Is a Schism on the Horizon?'