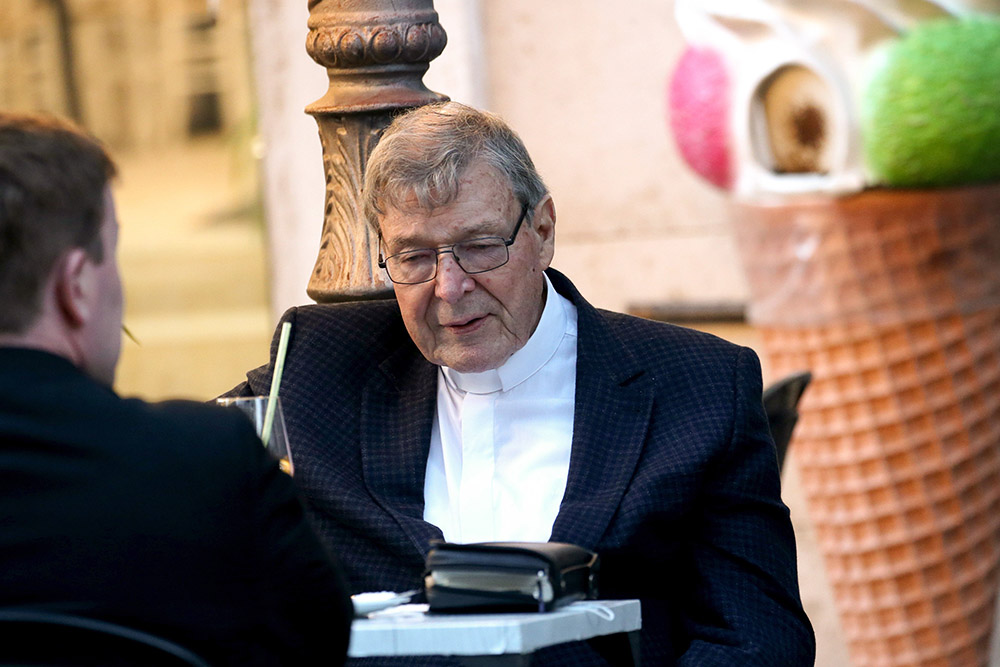 Australian Cardinal George Pell is seen at a cafe near the Vatican in Rome Oct. 4, 2020. (CNS/Franco Origlia)

Michael Gerson, in The Washington Post, proves once again that even in the midst of a debate characterized by passion more than reason, like the one following the Supreme Court's decision to overturn Roe v. Wade and Planned Parenthood v. Casey, he can find something to say that is intellectually smart, morally decent and passionate without being tendentious.

There has been a lot of commentary about Tuesday's testimony by former White House aide Cassidy Hutchinson, in which she detailed just how bonkers former President Donald Trump's behavior was on Jan. 6, 2021, but the winner for best commentary goes, unsurprisingly, to Jack Shafer at Politico. He not only focuses on what she said, he also offers the best description of Trump fatigue and why, in this case, we need to overcome it:

Because Trump was the subject, the sting may have lasted only a few milliseconds before its fire receded and some of us began to sequester the Hutchinson testimony in that seething cesspit where we stow evidence of his barbarous and criminal ways.

That is some splendid writing.

Sad news from the art world. Artist Sam Gilliam has died. He was part of a group of artists in Washington who formed and were formed by the Washington Color School that inspired so many abstract artists in the last half of the 20th century. Sam was part of the "second wave." I am lucky to have procured a splendid painting, "Shadows," by the great Gay Glading, who was part of that school, but I could never afford Sam's work! Still, I remember fondly running into him at parties and what a gracious presence he lent every conversation he joined. And the art he made was beautiful! If you are in the D.C. area, an exhibit at the Luther W. Brady Art Gallery highlights the work of the colorists and there is also an ongoing exhibition of Sam's work at the Hirshhorn Gallery on the National Mall.

It isn't really news that a group of Catholics fond of the traditionalist liturgy chose San Francisco for a gathering. But it was news to find that the group was seeking sponsors to the tune of $50,000 for what they called the "Cardinal Pell package," which entitled the sponsor to two tickets to the VIP dinner, recognition at the conference and a chance to "meet and greet" the cardinal. George Pell, the former archbishop of Sydney, was speaking at the event. For $20,000, sponsors could secure the "Cardinal Sarah package," named for the former prefect of the Congregation for Divine Worship, Robert Sarah, who is also speaking at the conference. Same chance to meet the cardinal and get recognized at the conference, but no VIP dinner tickets. I am not great at math, but I think that means for $30,000, you get two VIP dinner tickets. Must be some dinner. My colleague Chris Lamb at The Tablet has the story.

Mark Silk is half right about the Supreme Court's rulings in two cases involving the religion clauses of the First Amendment. The court's decision to side with a football coach who led many of his players in a postgame prayer, and about which some students said they felt pressured to participate, was wrong. But, as I argued last week, they got the tuition for religious schools case in Maine right and Silk thinks they got it wrong, along with their rulings on guns and abortion. Right or wrong, Silk is always worth a read.

It is July Fourth weekend, which means it is time to listen to some John Philip Sousa. All of his marches are fun, but on this weekend, nothing beats "Stars and Stripes Forever" performed here by "the President's Own" United States Marine Corps Band. Back in the day, when I played the trombone in the Willimantic City Band, this was my favorite.