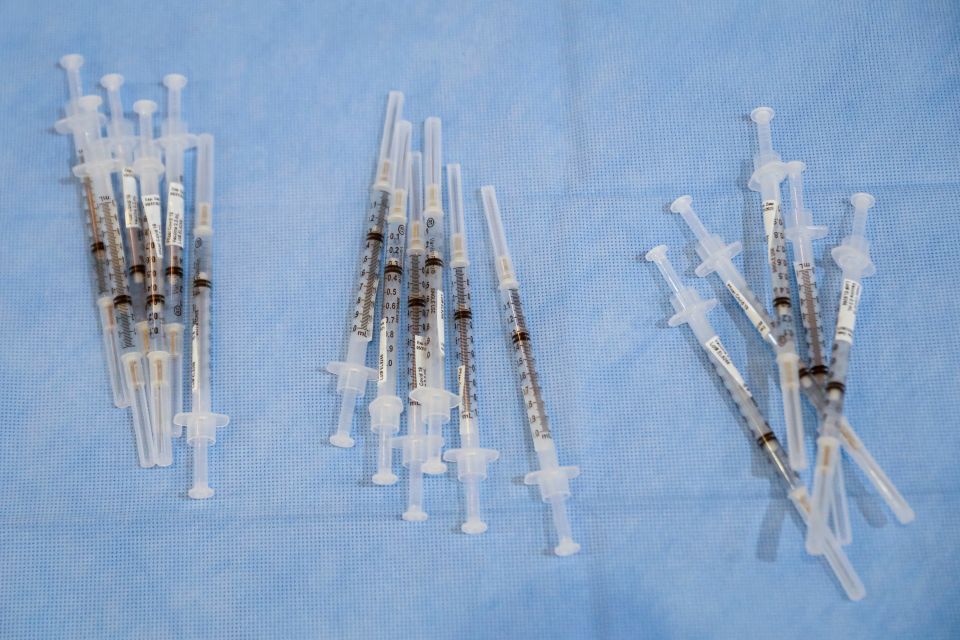 Syringes filled with doses of Pfizer's COVID-19 vaccine are seen in this illustration photo. (CNS/Reuters/Brendan McDermid)

As the U.S. House Select Committee investigating the insurrection on Jan. 6 continues to issue subpoenas, and Republicans continue to deny the reality of what happened that day, it is good to go back to the video taken inside the Capitol by The New Yorker's Luke Mogelson. The combination of insanity and violence is palpable.

The release of some 200 pages worth of draft materials from President Joe Biden's commission looking at the Supreme Court centers the debate over how to protect the country from the kind of judicial power grab perpetrated by Sen. Mitch McConnell in recent years. Adam Liptak at the Times looks at some of the ideas being tossed around. At the end of the day, term limits have emerged as a leading idea, and I am having difficulty imagining the argument against them. There is no reason these justices should exercise so much power for such a long time. Justice Neil Gorsuch was only 50 when he joined the court, Brett Kavanaugh was only 53, and Amy Coney Barrett was only 48. All three could be on the court for the next 30 or more years.

In The Washington Post, law professor Dorit Reiss looks at the legal issues involved in assessing the constitutional reach and limits of religious exemptions from vaccine mandates. She calls that assessment an "inexact science," which is exactly right. If anyone insists on a one-size-fits-all approach to the issue of religious exemptions from the law, chances are they are beholden to an ideological objective. Nothing wrong with that, but the Constitution is better at recognizing the messiness of life.

Speaking of ideology run amok, Heather Cox Richardson looks at the controversy in Texas where new Republican standards for educational curriculum resulted in the executive director of curriculum and instruction at the Carroll Independent School District in Southlake telling a teacher: "And make sure that if you have a book on the Holocaust, that you have one that has an opposing, that has other perspectives." Does the Holocaust have two sides? Richardson also discusses the many topics that are now barred from the curriculum but without which it is impossible to understand how we got where we are. Where is George Orwell when we need him?

One place George Orwell is not at is Yale University’s law school. There, a student was hauled in to meet with administrators because an email invitation he sent to a party had "triggered" some other students. The student taped the meeting with administrators and if you think concerns about higher education becoming illiberal are overstated, listen to it. The student was also told his belonging to the Federalist Society was also triggering to some of his classmates. Ruth Marcus, at The Washington Post, correctly states: "Sorry, but if you’re triggered by the Federalist Society, you don't belong on a law school campus." Bingo.

It is dangerous getting your hopes up that Florida will turn blue, or at least purple, anytime soon. Donald Trump carried the state twice, and the Democrats could not win the governor's race or the U.S. Senate seat in 2018, despite preelection assurances that demographic changes would catapult the state into the Democratic column. Could 2022 be different? Politico reports on Congresswoman Val Demings and her record fundraising haul, most of it from small donors, as she prepares to challenge incumbent Sen. Marco Rubio. Many of us first became familiar with Demings when she served as one of the House managers in the second Trump impeachment trial. You wouldn't want to face her in a courtroom, that is for sure. Now, having raised $8.5 million in the last fundraising quarter, Rubio may not look forward to facing her at the ballot box.

At Inc., a profile of Indra Nooyi, former CEO of Pepsi. Her story is, of course, remarkable, but the thing she says that jumps off the page is this: "When we talk about the future of work, we have to stop talking about technology and talk about families — about women. We need them in the workplace, and we're going to build a system to support them." Someone at the White House needs to recruit Nooyi to campaign for the child care provisions in the Build Back Better plan.