Father Bill was one of the good guys 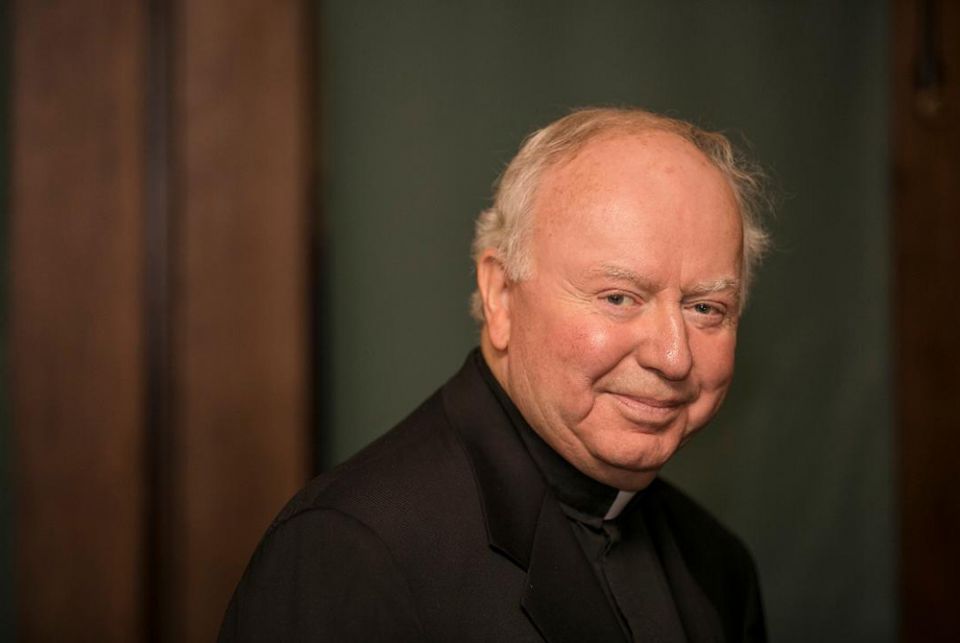 If it were not for Fr. Bill Kenneally, I would not be executive editor of the National Catholic Reporter. I would not even be Catholic.

Kenneally, homilist extraordinaire, standup comedian, lover of opera and the Chicago White Sox, and healer of hurting souls, died Oct. 28 at the age of 85. He timed it perfectly so he could be buried on All Souls' Day, although his eulogist called him "saintly," so maybe he was a day off.

I won't get into the details of how Father Bill kept me Catholic, but suffice it to say that I was more than halfway out the door, literally sobbing over repeated hurts from the church. He singlehandedly restored my faith in the institution and provided a parish home, St. Gertrude's in Chicago.

At his wake and funeral, I was one of dozens of folks who told the same story over and over: "Father Bill changed my life."

LGBTQ Catholics who were welcomed with open arms. Refugees and homeless people who moved into the vacant convent. Parents whose children died too young and who were comforted by Bill and the St. Gert's community. Resigned priests who were given a place to preach and continue in ministry. Ditto for other lay preachers, including women. At one point, I think there were four Roman Catholic Womenpriests in the parish.

And not just at St. Gert's. NCR board member Terrence Rynne was part of a monthly home Mass community with Kenneally for more than 40 years.

When Father Bill retired in 2006, the Chicago Tribune wrote about his sometimes controversial career. Ordained in 1961, he was of that generation of priests that welcomed the changes after Vatican II. But he told the Tribune reporter he had become frustrated with the conservative direction the church had taken.

"I don't think liberal Catholics are considered anymore by the hierarchy," he said. "They're thought of as some kind of pestilence or irrelevant."

He made St. Gertrude's a place for "here comes everybody" — and it still is today. As parishioner K.C. Conway said, "Bill dreamed a church where I belonged."

"He did that for all of us," said John Horan, a former priest who has worked with youth in troubled Chicago neighborhoods since he left the priesthood.

In his eulogy, Horan described Kenneally as "the Ty Cobb of preaching," except that instead of batting nearly .400, "he had a hit nine Sundays out of 10."

"At a time when too many homilies are forgotten before the prayers of the faithful, Bill's homilies are still touching us," Horan said, noting that Kenneally's nephew, John, was reading Bill one of his own homilies when his uncle passed away.

Father Bill was a reporter's dream — always willing to give an honest quote, reaction from the chancery downtown be damned.

"It was so liberating for us to hear from the pulpit, what we thought and spoke to each other in private," he said.

Horan called him a "holy poet" who "knew the million and one stories of our restless souls."

My favorite part of Mass with Father Bill was his extemporaneous post-Communion prayer from behind the altar. It was brief, but straight from the heart.

"Weren't we lucky to have had Bill?" I said to several friends at the wake and funeral.

Yes, we were. But not everyone is so lucky. As editor, I've overseen story after story of vibrant parish communities destroyed by cocky, conservative, young priests who think they have all the answers.

I worry that we are not nurturing the Father Bills of today. The church's limited vision of what priesthood is and who is called to it prevents so many vocations. If my children have a crisis of faith, will there be an open-minded, welcoming person like Father Bill to keep them in the church?

I think I'll pray to my new guardian angel about that one. Thanks, Father Bill, for all you did during your lifetime of service to God, the church and those of us lucky enough to have been pastored by you.

A version of this story appeared in the Nov 12-25, 2021 print issue under the headline: Father Bill was one of the good guys .

Column | Father Bill was one of the good guys

Keep your eyes on Jesus to pass through that narrow gate