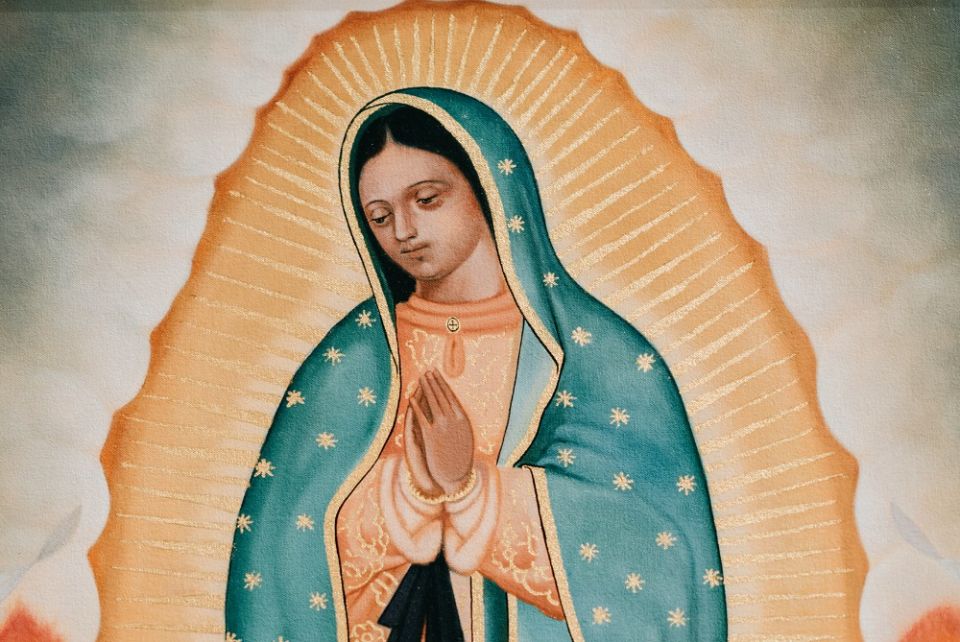 A painting by artist Lalo Garcia is seen in November 2019 an exhibit honoring Our Lady of Guadalupe and St. Juan Diego at the Cathedral of Our Lady of the Angels in Los Angeles. (CNS/Courtesy of the Los Angeles Archdiocese)

Anyone who spends some time in Catholic spaces can feel the split between "progressive Catholics'' and "conservative Catholics." No issue is splitting the church as much as the identity battles between these two camps. These two identities are powerful and touch upon every part of one's Catholic faith.

To be a progressive Catholic is to open spaces for LGBTQ+ people to feel welcomed, to try to be innovative with the liturgy, and to apply the label "pro-life" to refugee issues. To be a conservative Catholic is to fight for a traditional definition of marriage, to attend the liturgy in Latin or in the Novus Ordo with traditional music, and to focus one's pro-life activism on anti-abortion initiatives.

Progressives and conservatives find their own saints. In an interview aired weeks before the 2016 election, Donald Trump sat down with the Eternal Word Television Network's Raymond Arroyo. Hidden within his discussion of anti-abortion politics and commitment to religious freedom was a question only a Catholic media outlet would ask.

Near the end of the interview, Arroyo asked Trump to name his favorite saints. After a moment of silence, Trump named Mother Teresa and Pope John Paul II. When pushed on his choice of the former pope, Trump said that he appreciated John Paul II, because "he had something special. ... There was a warmth. There was a toughness, but there was a warmth that was incredible."

The choices of Mother Teresa and John Paul II seem unusual when seen outside the lens of conservative identity. By choosing those two saints as his favorite, the future president was triggering conservative Catholic identity.

Groups or individuals that participate in civil disobedience or direct action for change are looked upon with skepticism within the conservative movement. When compared to other saints and holy people who agitated local systems in support for the disadvantaged, Mother Teresa served the poor outside of the political system. She served the dying directly rather than protesting for comprehensive medical care for the dying. Catholic conservatives who believe that the best way to help the downtrodden is through direct charity rather than government assistance can find a saint in Mother Teresa.

Where Mother Teresa did enter the political arena, it was for causes of deep importance to religious conservatives. In her widely watched acceptance speech for the Nobel Peace Prize, Mother Teresa condemned the commonplace practice of abortion in modern society: "And I feel one thing I want to share with you all, the greatest destroyer of peace today is the cry of the innocent unborn child. ... To me the nations who have legalized abortion, they are the poorest nations."

By invoking Mother Teresa, Trump signaled to conservative viewers that he shared their views on abortion.

John Paul II is a more obvious choice for conservatives. John Paul II's life was lived amid disastrous Polish far-left policies. He visited Poland in 1979, which electrified the Polish public. The eventual fall of the Polish communist government was a multifaceted event, but it is commonly understood that John Paul II's visit and concern for Poland formed an environment where Polish Catholics could unify against the communist government.

The battles fought in 2020 are different than the ones fought in 1979. The Cold War is over, and a communist takeover of the world is no longer a real threat. While the threat might be gone, a strong emotional fear of leftist policies exists in some corners of the American right.

For example, Donald Trump recently characterized socialism as something that "destroys nations." A conservative identity that defines itself as opposed to any form of perceived leftism is likely to be triggered by John Paul II, an anti-communist warrior in the Catholic imagination.

John Paul II also activates conservative identity because he stands for the traditional understanding of sexuality and gender identity supported by many conservative Catholics. He laid out his views on the subject in the theology of the body.

Given as 129 lectures between 1979 and 1984, John Paul II laid out a conservative understanding of gender, sex, sexuality and contraception. His lectures have become a tour de force in the proceeding 30 years, with the U.S. bishops devoting parts of their website to it, and secular conservative-leaning universities offering courses on it. In many ways, the theology of the body has become John Paul II's most endearing theological legacy.

Certain saints and holy figures activate progressive identity. While not a canonized saint, Dorothy Day is often held up as a model for progressive Catholics. Day strove for large systemic change. This ethos influenced her interactions with institutional power.

She spent much of her Catholic life participating in direct action against perceived injustices of the American government. In 1955, she joined a group of Catholic women in protesting New York's civil defense law. Instead of practicing sheltering techniques in the case of a nuclear strike, Day and her compatriots sat on park benches. She also co-founded the Catholic Worker movement that follows Day's philosophy by joining demonstrations against injustices.

Day agreed with John Paul II and Mother Teresa in that she had negative views of abortion and contraception. In some ways, these issues were more real for Day, who had an abortion in the early 1920s. Her criticism of abortion did not dominate her public life. Most of her demonstrations were against nuclear proliferation with her famous 1955 demonstration targeting laws directly related to the world's reliance on nuclear arms.

Our Lady of Guadalupe is also common in progressive Catholic circles. As often as she is on signs at the March for Life, she is also on signs of Catholics with an expansive definition of pro-life, seeking justice for migrants and the undocumented.

Some Catholics might see the unification of sainthood and identity as a negative development in American Catholicism. In this view, the communion of saints and by extension all religion should be an apolitical system of connection with the divine. As figures believed to be heaven with God, saints should be divorced from human conflict like politics.

Next time you are recounting your personal litany of saints, reflect on how your political identity affects those on it.

[Mark Neuhengen (@MNeuhengen) is a Chicago-based writer focused on religion, politics and culture. He serves St. Teresa of Avila Parish as the director of mission.]

Commentary | Progressive and conservative Catholics find their own saints

We are having another Fortnight for Freedom, but we shouldn't