What it might mean to really listen to Trump voters 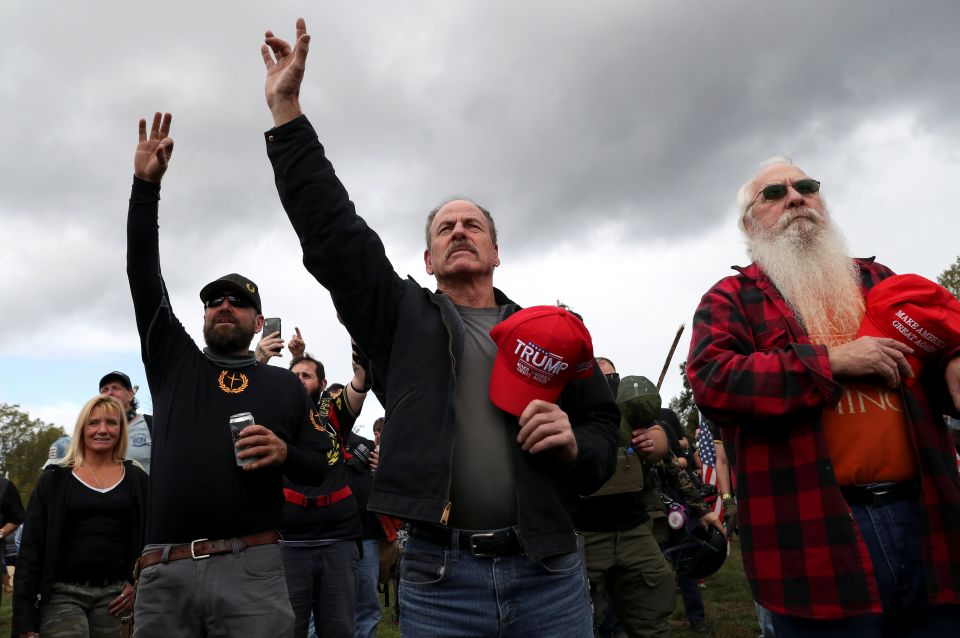 In the bedlam that engulfs our nation, are we much interested in how our political and social opponents see things? Do we know any with whom we can honestly and respectfully talk it over? Or are we mostly content to lob aspersions in their direction?

For me, a Biden Democrat, the efforts to reach out have mostly been one-sided, the Trump supporter doing the talking and my clumsy attempts to connect. Mostly, we fumble around with contained politeness speaking past one another. Case in point: a charming friend, who works in social services, was in the midst of describing recent events in her life and hit upon a subject that seemed to me to invite a presidential preference question.

Her eyes narrowed and jaw tightened. "I know one thing," she said in a sudden, dark tone, "I would never vote for Biden or anyone like him." I did my version of calm to ask why, and her answer was along the lines of how Biden was only out for himself, to make money, whereas Trump "really loves America." I saw no place to go except to note as dispassionately as possible that Trump was a billionaire who wouldn't disclose his tax returns. There it ended, as exchanges usually do when assured logic and deeply held emotional conviction, neither inherently superior to the other, engage in hopes of changing the other's mind.

I further wondered if we came anywhere near talking about the same thing. Depth psychology tells us that surface talk is loaded with hidden agendas. Lately I've been tuned into discussions of what was behind the seemingly outsized bombast of the Trump crowd, my political adversaries.

My visitor's sudden flash of anger had sprung from calmness of her own, and she went back there after that episode. Later, I wondered if the anger might have stemmed from recent personal disruptions. Perhaps the anxiety from that setback had translated into anger echoed somehow by Trump's outrage. Thinkers since Aristotle have seen fear and anger as interchangeable sides of a coin.

That's merely speculation about her on my part, an attempt to grasp what otherwise was a sudden change in mood. The fact that it emerged from a brush with the code language of politics hints at the protective tendency to find publicly acceptable forms by which to mask hidden, private pain, masking the sighs too deep for words.

I assume that fears disturb our well-being and arise in most of us during this frightening siege of disease and racial conflict, when life as many of us have known it has gone topsy-turvy. My attention has focused primarily on how this state of imbalance triggers clashes between the political extremes and whether there is any will or know-how to lower the strife.

Fury can operate as an explosive cover for subtle, damaging sensitivities that get buried in the clash. As a nation, we have backed further into bunkers far removed from one another. Those of us on different sides of the wall simply don't know each other well enough to break through the barriers created by economic, social and racial bias. So we yell, denounce and stereotype each other without gaining much clue to deeper causes of rage brewing underneath.

Social scientists have given increasing attention to one of those alleged sores, the corrosive impact of class snobbery and economic-social neglect on lower economic groups, which has built stores of resentment that Trump has exploited.

Michael J. Sandel of Harvard University aimed a recent New York Times op-ed piece at showing how Americans with college degrees and high incomes often look down on those without them. He cites findings from Europe and the U.S. that those who are highly educated and privileged "most dislike" those who are "poorly educated," more so than they disdain poor, obese or working class people. The term "diploma divide" has become a handy survey and academic (if inflammatory) tool for classifying the two groups. The "non-college graduate" not only designates a real polling cohort but increasingly implies inferiority.

Embarrassing pangs from real and perceived belittlement can, say the social scientists, find political and moral voices that echo their distress. Trump's voice, his righteous indignation, seems to fill that need while paying no heed to the deeper gripes that prompt that support. The underlying hurt, which may be fixable and more meaningful, can therefore remain unaddressed. For those who care about the minds and hearts of Trump backers or look to change their votes, there are likely larger, more pervasive issues of wounded self-respect in the shadows. The resentments may be surfaced but not without large measures of trust and dignity, which under polarized conditions appear to be in short supply. Many researchers accordingly see the widening gap between rich and poor steadily worsening the anger crisis. Distance and alienation prevail.

Sandel draws attention to the diploma divide as one sign of the declining status of lower income citizens. Whereas a quarter of members of the Congressional House were non-college graduates in the early 1960s, the percentage has shrunk to a tiny 5%. No senator any longer fits that description, though only about one-third of Americans hold college degrees. A major remedy Sandel says, would be "renewing the dignity of work and putting it at the center of politics."

Jesus in the Gospels speaks to the difficulty of getting to the bottom of what we hear. In St. Mark's Gospel, Jesus says matter-of-factly, "Let anyone with ears to hear listen." Seems perfectly self-evident, but Jesus, in effect, is asking whether his listeners are actually listening through an acutely tuned soulful ear. He explains that he teaches his gathered disciples in parables, stories wrapped in puzzles, hinting that they'd otherwise likely miss the point (though they often do anyway), especially since the point isn't always what it might first appear to be on the surface. 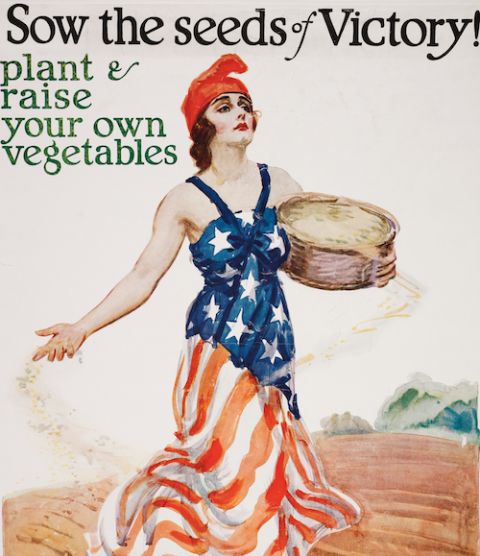 Detail of poster from 1918, during World War I, by James Montgomery Flag promoting gardening to free up other food resources (National Archives)

He relates the parable of the sower who scatters seeds on different types of land. Most don't last long on rocks, thorns and the footpath, but the ones on good soil prosper. The disciples are invited to hear the story as a metaphor for their own ability to hear Jesus message.

"Pay attention to what you hear," Jesus advises, "the measure you give will be the measure you get." Put some effort into getting the subtle message. From my solidly Biden side, I am challenged to discern wider implications in defiant Trump backers, whose motives might seem baffling, even as they are boisterous and seemingly sure of themselves. It helps to see where that is true in myself.

The key is trying to listen carefully and holistically enough to detect emotional hot spots like fears that perhaps get displaced on outer causes and resentments. I believe reaching and empathizing with such hurts can engender honest exchange. Conversion to my political view is improbable, but a small step toward the kind of reconciliation we wish for can take place. Being genuinely with someone of a different set of beliefs doesn't mean approving the opposing views, but there can be a genuine granting of mutual dignity.

Catholic social teaching promotes that kind of movement in its exalting the common good. While individualism is celebrated in our national creed, Catholic social teaching espouses a contrary conviction, that we are created as social beings who are responsible for each other's essential well-being, even at the cost of personal sacrifice.

It urges us to adhere to a model of serving the rights of every human being to the essentials of decent life, including housing and food, sound education and meaningful work. We can fashion our ears to hear the call to equal dignity even in an era of selfishness. That goes for both sides in the pitched battle. In the Civil War era — the nation's bloodiest — racial, economic and regional fears didn't stop until hundreds of thousands had died in resulting battle. The cause of dignity was at the center of that horror. While I'm looking at tentative steps in a personal hope to alleviate stress, I believe bolder efforts can treat danger before it rages beyond control.

Weaving common humanity requires deep respect and tolerance but cannot abandon science and reason in the process. Catholic social teaching was codified in the age of reason and expects no less. Reason is a created gift, a relied-upon, essential means of arriving at truth, as imperfect as that means might be. We would hope that in reaching out to those in the Trump camp, or its equivalent, we can learn to respect and to hold to a line of sound and truthful thought. Getting at underlying irritants may alleviate distracting, illogical attacks both in them and in us.

We need the political and religious right to be curious about our commitment and our sublimated wounds and idols, too, to probe our fears of losing our privileges and individual possessions, like our investment in tainted stock and selfish protection of real estate discrimination. Inquiry and soul-seeking needs reciprocity to attain indispensable mutuality. That is what breakthrough might look like. Catholic social teaching embodies those goals but adds a quality that is missing from many secular initiatives. It says that all depends not on ourselves but on our faith in the ability of that other Other to do it.

Column | What it might mean to really listen to Trump voters

How can we stop the anger, end the fear?