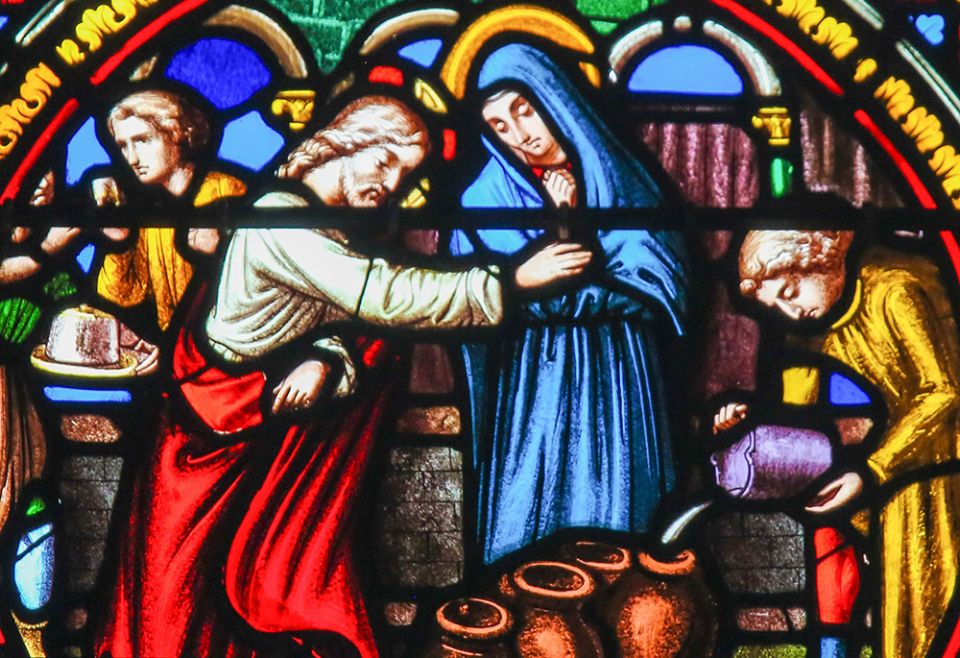 Stained glass in the Chapel Notre-Dame des Flots in Sainte-Adresse, France, depicts Jesus transforming water into wine at the marriage at Cana. (Dreamstime/Jorisvo)

Jesus loved banquets. We never hear that he refused the offer of a good meal. Once there, he would transform the table into a space for evangelizing repartee. In today's scene, we can imagine him wryly observing as people vied to position themselves for the best seat in the house. If he wasn't actually chuckling into his beard, his eyes were surely laughing as each guest preened in the attempt to appear more distinguished than the rest.

Aware of the learning capacity of his audience, Jesus first offered advice about how to avoid humiliation: "Choose the lowliest place and nobody else can put you down." He directed this pragmatic counsel to folks highly concerned about appearances — a few of them might have been astute enough to grasp his wisdom.

But Jesus didn't stop with that wee bit of commentary. Although people had gathered for an ordinary Sabbath meal, Jesus wove a tale about a wedding banquet. That's a sure sign that he was talking about a lot more than the evening's dinner. Wedding banquets were one of his favorite symbols for the reign of God. A wedding celebrates something new and full of potential. It sacramentalizes the bonds of love and new relationships that can transform an entire community.

In that context, Jesus addressed his fellow guests as the probable hosts of dinners to come: "When it's your turn, break free of this old mold of a guest list written in stone. Get out of the rut of having everyone in the same position, repeating well-worn conversations, with nothing more than a change of venue. Repeating this same old, same old is hardly different from serving leftovers week after week. What about a new guest list instead of new clothes and fancy foods?"

Having gotten their attention, even if they assumed he was joking, he suggested that they plan a collective escape from the routine by hosting the most unlikely characters in the area. He wanted to startle the self-impressed diners into imaginative creativity.

What if everybody at that table decided to take him up on the suggestion? Instead of inviting one another, each could seek out an eclectic group of well-known and far less prestigious people. One might invite the butcher and his apprentice, another, the milkmaid. Someone would bring in the town beggar (offering a bath as well as a foot washing before reclining at table). Another patriarch could send out a couple of sturdy sons to carry in the paraplegic lying near the town square while his daughter escorted the widow next door. Each of those guests could be invited to bring a "plus-one" to round out the company. Imagine the unexpected table conversation!

What could happen at such a dinner? The entire tenor of the gathering would change as the guests entered into the sacrament of the table where eating together can be a living expression of shared humanity. The common enjoyment of the fruits of the earth could become a celebration of the gifts of smell and taste and beauty and a sign of their common dependence. The variety of people and perspectives around the table would remind them that God's creation brims with luxuriant diversity, all there for an enjoyment that increases exponentially to the degree that it is shared.

When the original group would regather a few weeks later, instead of worrying about procuring the best places, they might burst into tales about the experience, about ideas and perspectives they had never before imagined. It's not hard to imagine Jesus saying about such groups: "This is what it is like in the reign of God and the resurrection of the righteous."

Pope Francis follows Jesus' lead in his letter Fratelli Tutti. Critiquing entertainments like the dinner where the place of honor grabbed everyone's attention, Francis laments that we can feed ourselves " 'on dreams of splendor and grandeur, and ended up consuming distraction, insularity and solitude.' " He goes on to remind us, "Human beings are so made that they cannot live, develop and find fulfillment except 'in the sincere gift of self to others.' " He wants us to constantly enlarge our table of encounter.

Following the advice Jesus and Francis offer would be an adventure — a step into the unknown. They are inviting us not just to eat and drink in the presence of others (pews apart), but enter into mutually nourishing and transforming interchange. As Francis says, " 'Life, for all its confrontations, is the art of encounter.' ... We, as a people, should be passionate about meeting others, seeking points of contact, building bridges, planning a project that includes everyone." Francis says this can be our aspiration and style of life. Jesus calls it the resurrection of the righteous.

This story appeared in the Aug 19-Sept 1, 2022 print issue under the headline: Our style of life .

Column | Twenty-Second Sunday in Ordinary Time: Our style of life

Links: Evil in conservativism; unions are good for all; parody of wokeism