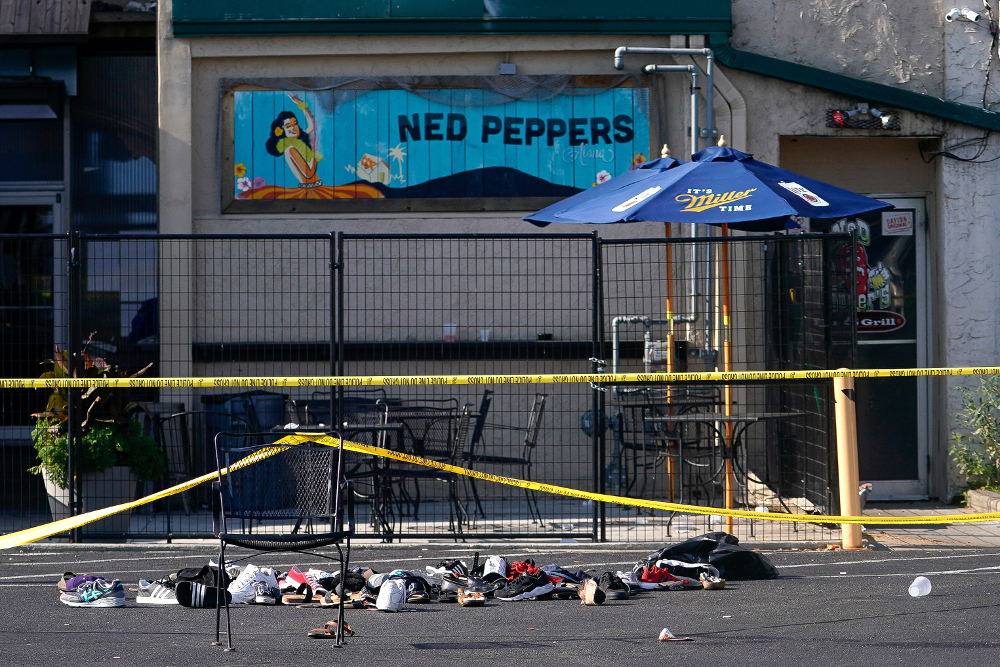 Shoes are seen piled in the rear of Ned Peppers Bar Aug. 4 after a mass shooting in Dayton, Ohio. A least nine people were killed and more than two dozen injured Aug. 4 in a shooting at a popular nightclub district of downtown Dayton. (CNS/Reuters/Carlos Sanchez)

As a bad Catholic, I need to make a confession. I no longer pay attention to mass shootings.

If I see a headline in the newspaper or online, I skip over to another story. If it comes up on my NPR podcast, I touch the arrow that advances me to the next story. If it is on CNN, I switch to the Hallmark channel.

I feel guilty, but I simply cannot take it anymore. I am sick of the violence and our country's inability to do anything about it. I see no point in listening to the same story over and over again.

News stories about mass shootings always follow the same 10-point template: 1) initial confusion about what happened; 2) onsite interviews with those who escaped the scene; 3) talking heads speculate about the motive of the gunman; 4) a press conference by police chief and mayor; 5) calls for greater gun control from Democrats; 6) calls for thoughts and prayers from Republicans; 7)  a Trump tweet; 8) more speculation on motive of gunman; 9) coverage of funerals; 10) interviews with victims' families.

We move on to other news until the next shooting. It doesn't matter where the shooting takes place — gay bar, church, primary school, university, shopping center, baseball game or on the street. Nothing shocks us enough to make us demand change.

And yet, mass shootings are only a minor contributor to the deaths from gun violence. Gun violence is common in most inner cities, but it gets little coverage in newspapers read by the white community. And gun suicides, spousal shootings, and accidents are so common that even white victims are ignored unless a child is involved.

I am afraid that others may soon respond to mass shootings that same way I do, the same way we do to other gun violence — ignore it and move on. No matter how horrible something is, if it is repeated time and time again, we get accustomed to it.

We can't let this happen. Religious leaders cry out but few listen.

Many Catholic leaders have called for government action to curb gun violence. In their 2000 pastoral statement on criminal justice, the bishops wrote, "We support measures that control the sale and use of firearms and make them safer (especially efforts that prevent their unsupervised use by children or anyone other than the owner), and we reiterate our call for sensible regulation of handguns."

For many years, the U.S. bishops' conference has supported what it calls "reasonable measures" to address the problem of gun violence.  These include:

None of these recommendations has gone anywhere. We still do not have sensible regulations of handguns, let alone a ban on assault weapons.

The country needs to do something before mass shootings become so common that people follow my bad example and start ignoring them. Over 60 percent of the public wants stricter gun control. True, gun control is controversial, but the Pew Research Center found bipartisan support for some proposals

"Around nine-in-ten Republicans and Democrats (both 89%) say people with mental illnesses should be prevented from buying guns," according to a 2018 report from Pew. "Nearly as many in both parties (86% of Democrats and 83% of Republicans) say people on federal no-fly or watch lists should be barred from purchasing firearms. And majorities of both Democrats (91%) and Republicans (79%) favor background checks for private gun sales and sales at gun shows.'

But Congress cannot even enact such minor controls. Enough is enough. We must demand that our government do something about mass shootings and other forms of gun violence.