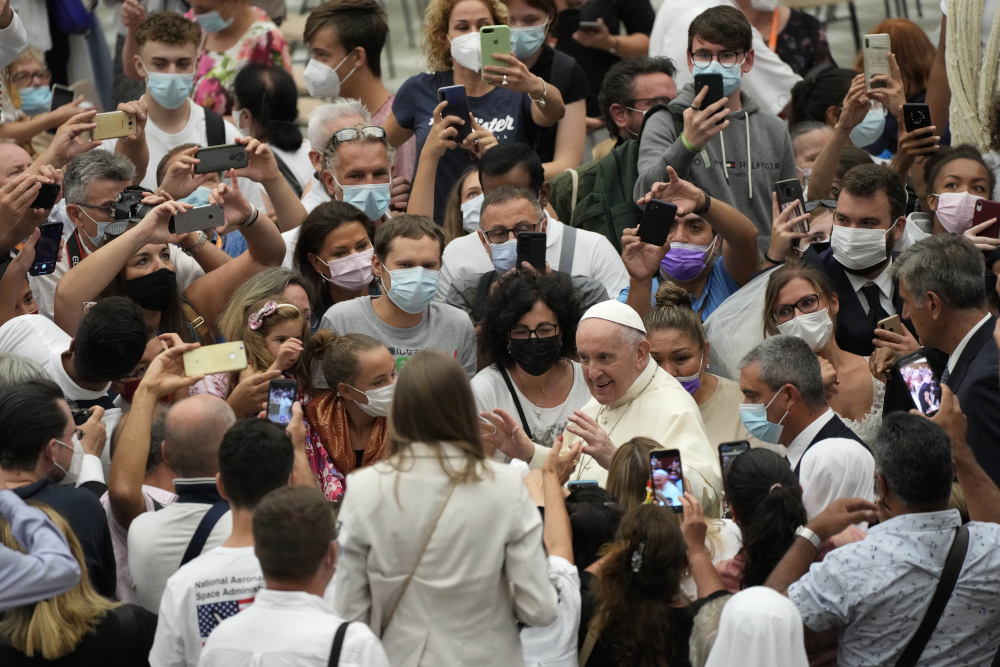 Pope Francis stops to greet the faithful as he leaves after the Aug. 25 weekly general audience at the Vatican. (AP/Gregorio Borgia)

When it comes to the question of Pope Francis getting a third COVID-19 vaccine shot, the Vatican is caught between a rock and a hard place.

The Vatican has traditionally spoken out for poor countries, many of which have been able to get very little vaccine, so few of their people are vaccinated against COVID-19. The church has joined calls from the International Monetary Fund, the World Bank and the World Health Organization to provide more vaccines to developing countries.

To talk about giving people in rich countries a third shot while most people in poor countries have not received their first appears to be a violation of the church's teaching on solidarity and social justice. Some ethicists have compared giving third shots in rich countries to giving a second life jacket to first-class passengers on a sinking ship when those in steerage have none.

On the other hand, the FDA's vaccine advisory committee, following the results of early research, has recommended that those who are elderly and immunocompromised get a third jab.

Following these criteria, Francis, at 84 years of age and still recovering from surgery and missing part of one lung, is an obvious candidate for a third shot, especially since he interacts with so many people from all over the world and, regrettably, does not always wear a mask.

But the pope is more than a medical history. What kind of witness would the pope give if he got a third jab? Will he be seen as an elderly person who needs protection or will he be seen as a first-world resident who ignores the needs of those in poorer countries?

"In the context of ongoing global vaccine supply constraints, administration of booster doses will exacerbate inequities by driving up demand and consuming scarce supply while priority populations in some countries, or subnational settings, have not yet received a primary vaccination series," said a WHO Aug. 10 interim statement.

Read this next: Editorial: Global vaccine equity is a matter of life and death, for all of us

Others, including the Biden White House, argue that enough vaccine can be produced to do both. I will believe it when I see it.

But if we agree with the FDA advisory committee that a third shot is necessary to protect the elderly, then we certainly want Francis to get it.

I fear that Francis will decide not to get the third shot despite the best medical advice. His desire to be in solidarity with the poor may put his life at risk.

If he were a simple Jesuit, his religious superior could order him to get the shot, as mine has ordered me. But nobody can order the pope to do anything.

If everyone in the Vatican went on strike, perhaps that would force him to get a third shot. Or his doctor could simply trick him by telling him that the shot is something else.

A last resort would be for a couple of Swiss Guards to hold him down while he is given the shot. This would result in all those involved getting fired and excommunicated. Cannon 1370 §1 states, "A person who uses physical force against the Roman Pontiff incurs a latae sententiae excommunication."

But it would be worth it, and everyone knows Francis is merciful, so all would be well in the end.