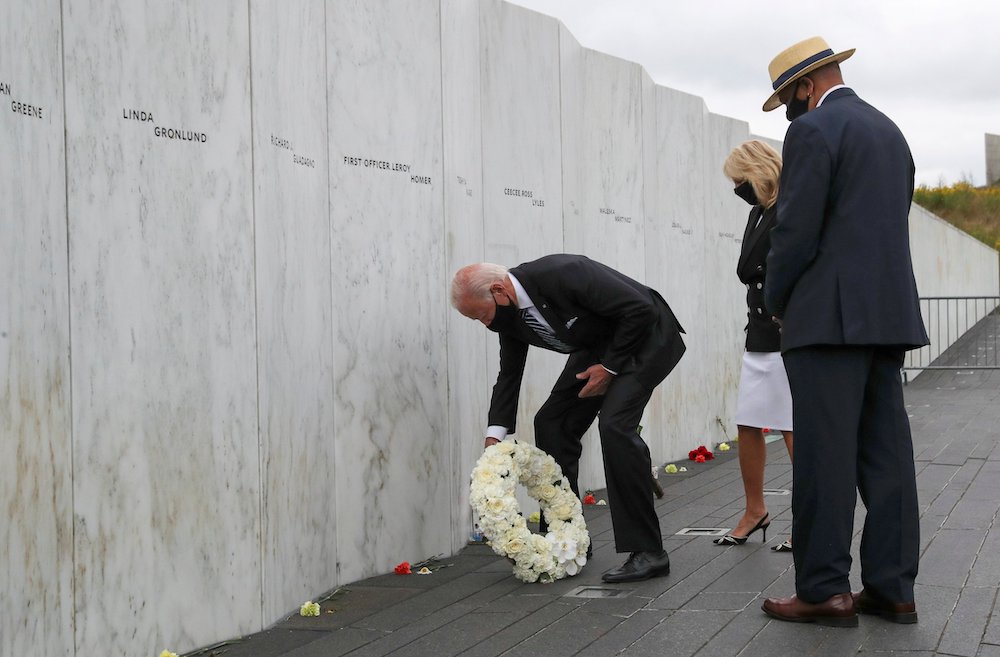 Democratic presidential nominee Joe Biden and his wife Jill Biden lay a wreath during a visit to the Flight 93 National Memorial wall near Shanksville, Pennsylvania, Sept. 11. The day marked the 19th anniversary of the 9/11 aviation terrorist attacks on the U.S. (CNS/Reuters/Leah Millis)

As I watched the Democratic National Convention, I found the many references to faith-based political decision-making both inspiring and empowering. It was refreshing to see my own faith-informed political leanings resonate with so many others.

At last count, more than 500 faith leaders have endorsed the Biden-Harris ticket, many of whom, such as the renowned evangelical leader Jim Wallis, have never endorsed a political candidate before.

first-hand when he (and his ever-present security detail) attended Sunday Mass at my local parish during an official visit to Cleveland. Joe Biden never misses Mass, regardless of his other pressing duties.

So, when I heard about a new faith engagement initiative dubbed "Believers for Biden," I signed up to see what it was all about. I have since attended an array of virtual events, including a brief weekly devotional held every Tuesday, a national voting call in held on Aug. 27 and the Catholics for Biden launch on Sept. 3.

I did not expect to be so deeply moved by rabbis, imams and Protestant, Catholic and millennial believers of all stripes praying together and witnessing that our shared faith requires us to help the most vulnerable and to promote the common good.

Turns out, I had not fully owned the depth of my own despondency at the massive corruption unrolling on my newsfeed every single day.

As I prayed with this expansive family of believers, I found surprising strength as together we turn away from despair and toward trust in an ever-faithful God.

At the Aug. 25 devotional, Carla Brailey asked God to help us "serve all people of different races, creeds and genders," and despite "very dark moments that we may not understand," she asked God to "fill us with all of the positive energy and the joy and the inspiration that we need to continue to move down your path as public servants."

Joshua Dickson is the national faith engagement director for the Biden-Harris campaign. A lifelong evangelical raised as a Republican and educated at Chicago's respected Moody Bible Institute, Dickson was drawn to the Democratic social justice agenda after working as a teacher in the South Side of Chicago.

In a brief interview, the youthful Dickson told me: "I started to dig into my own values and say, you know, how does the ministry of Jesus comport with this? … I just saw how much Jesus' ministry was focused on tearing down walls of oppression and injustice."

At the national call-in day, Rabbi Rachel Kobrin blew the shofar heralding Rosh Hashanah, the Jewish New Year (Sept. 18-20, 2020): "The shofar represents the shattering of our hearts. … May the cry of the shofar awaken our souls, stirring the soul of our nation, compelling us to mend the fragments and heal the pain, inspiring us to charge ahead in justice."

Cleveland's own the Rev. Otis Moss Jr. — who was at the 1963 March on Washington and subsequently jailed many times — soberly reminded us that our vote in the 2020 presidential election brings with it a cabinet, a sub-cabinet, two or three Supreme Court justices and scores of federal judges: "We are facing one of those crossroads in history, and what we do in this election, we will be living with, I think, for the next 50 years or more."

Network's Sr. Simone Campbell was at her eloquent best at the Catholics for Biden kick off. She encouraged virtual viewers to take a new "Pope Francis Voter" quiz, which includes an "equally sacred" scorecard geared to "helping Catholics see that they're multi issue voters."

Addressing Catholics who believe they can only vote on one issue, Campbell said forcefully, "That's never been our faith ... What has been our faith all these years has been caring for the unborn to ensure that moms have access to health care, to ensure that moms have adequate nutrition, that infants have adequate nutrition [and] that people are cared for."

After the election — one she clearly hopes Democrats will win — Campbell warned "we cannot create an environment which is tit for tat. We have got to create an environment that welcomes everyone in, that heals our democracy. … We can do this if we work at it. And quite frankly, if we pray about it."

Stephen Schneck issued a searing indictment of Donald Trump, naming him "the least pro-life president in history." Schneck, a former director of the Institute for Policy Research & Catholic Studies at The Catholic University of America and now at the Franciscan Action Network, listed the anti-life policies pitilessly promoted by the Trump administration:

A former president of the Jesuit Volunteer Corps (and Eunice and Sargent Shriver's grandson), Tim Shriver Jr. spoke passionately about his experience with hundreds of young Catholics whose embrace of Catholic social teaching inspired their work with the most vulnerable.

In thought-provoking interview shortly after the Catholics for Biden kick-off, Shriver told me the young Catholics he meets fall into two categories. The first grew up in conservative spaces, both religious and political, and then find "they can no longer align with the space from which they have come." The second, like him, "grew up in the Democratic Party's umbrella but have been challenged throughout our lives … to wrestle with the disagreements between the Democratic Party platform and our church's teaching."

Both groups find themselves struggling with tensions over religious faith in the Democratic Party and tensions over abortion and LGBT issues in the Roman Catholic Church.

A visionary Shriver sees a new generation of Catholics who are unafraid to address both sets of tensions:

What really inspires me is that we have a moment here to transform on two fronts, two very important institutions, the political institutions of our country and the religious institution of the church. … [We hope to] force conversations that in my lifetime haven't been happening at large public levels.

The faith focus at the Democratic convention gave Shriver heart: "For the first time in my lifetime, there's a clear message to voters of faith that this is your party, too, and we're a party that can handle people of faith and people of no faith in the same umbrella."

Both Shriver and Dickson are impressive strategists whose insightful organizing suggests a promising future for progressive faith-based activism.

When asked what they want people to do, their response was immediate and unanimous. "Talk to your family, talk to your friends, and talk to you neighbors. We must be courageous in speaking up about the life-or-death public policy issues that will impact our democracy for generations to come."And (of course) consider signing up with Catholics for Biden to find out about virtual prayer events and other activities in your geographic area.

Echoing Sister Simone's wisdom — we must also pray about it. A lot.