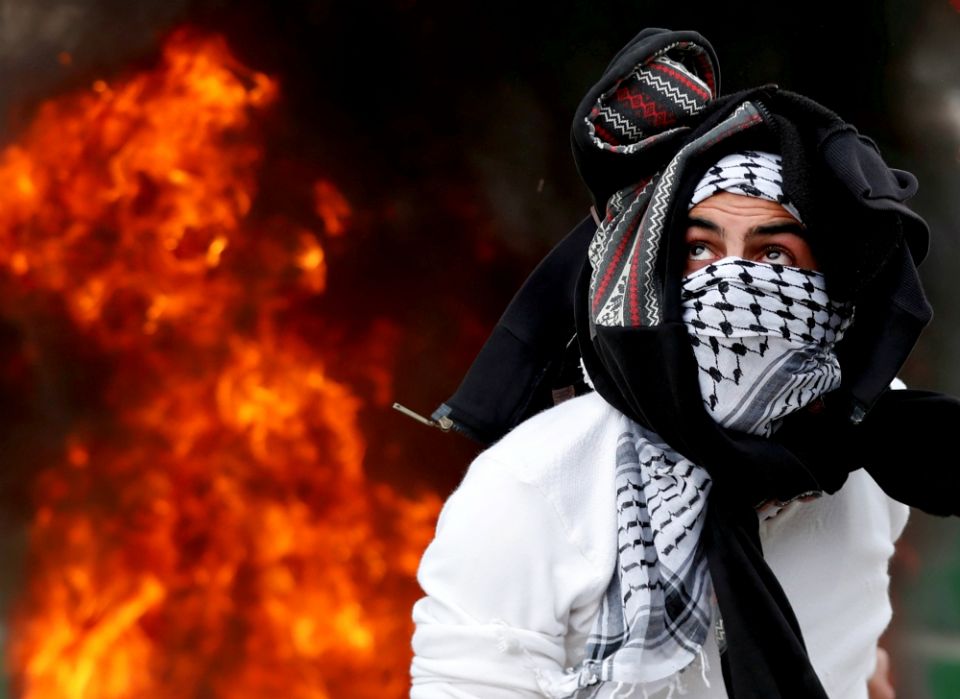 A Palestinian throws a stone at Israeli forces near Ramallah, West Bank, during a Dec. 20 protest against U.S. President Donald Trump's decision to recognize Jerusalem as the capital of Israel. (CNS/Reuters/Goran Tomasevic)

With two short phrases, "Jerusalem is Israel's capital" and "this ... is a recognition of reality," U.S. President Donald Trump upended a cornerstone of U.S. Mideast foreign policy for 70 years. Namely, that the U.S. would not recognize Jerusalem as solely the capital of Israel since Jerusalem was an issue whose final status was supposed to be decided in final peace negotiations between the two parties that hold religious and historical claim to the city, the Israelis and Palestinians.

This "reality" that Trump referred to is a selective one, as he seems to have not known, or cared, that reality and legality are two separate and sometimes conflicting concepts in world politics and international law. One has only to look at Russia's annexation of Crimea and former Iraqi President Saddam Hussein's invasion of Kuwait, among many examples, to see the distinction.

Trump bolstered his "reality" argument by stating that recognizing Jerusalem was in the interests of Israeli-Palestinian peace by offering "fresh thinking" as opposed to the "failed strategies of the past." This, of course, couldn't be further from the truth.

Trump did not make his Jerusalem announcement out of his desire for Mideast peace, his respecting the views of most Americans, or safeguarding U.S. interests in the Middle East. In fact, a December 2017 Brookings Institution poll shows that a substantial majority of Americans (63 percent) and even 44 percent of Republicans oppose moving the U.S. embassy in Israel from Tel Aviv to Jerusalem.

Worldwide, feelings toward the issue of Jerusalem are much the same, if not more intense. Rejection of Trump's Jerusalem recognition, save for unsurprisingly Israel, was universal and included the United Nations, Pope Francis and the European Union, with some of America's closest allies, including the United Kingdom, Germany, France and Italy, issuing rebukes.

The depth of global opposition to Trump's move was in full display at the United Nations. On Dec. 18, a U.N. Security Council resolution affirmed, "Any decisions and actions which purport to have altered, the character, status or demographic composition of the holy city of Jerusalem have no legal effect, are null and void and must be rescinded."

The resolution was voted 14-1 in favor, with the U.S. veto making it the only Security Council member in opposition. The veto blocked passage of the resolution.

This was followed by a U.N. General Assembly vote on Dec. 21 on the same issue, voting overwhelmingly, 128-9, to repudiate Trump's Jerusalem decision. Trump blasted both U.N. votes.

U.S. representative to the U.N. Nikki Haley, in a threat more reminiscent of "The Sopranos" than diplomacy, warned of funding cuts to both the U.N. itself and the countries that voted for the resolution. The implication that countries "owed" the U.S. their vote because of foreign aid was not taken kindly by the members of the world body.

Opposition to the Jerusalem embassy move both among Americans and worldwide raises the obvious question: Why did Trump decide to move the embassy anyway?

The answer is as simple as the issue of Jerusalem is complex. Trump was simply making one more of his tactical and transactional political calculations meant to bolster his narrow core political base and appease some of his major financial donors, most notably billionaire Sheldon Adelson, who contributed $25 million to the Trump campaign and another $5 million to Trump's inauguration.

Trump can scarcely afford to lose either of these constituencies, especially given the steady erosion of support from independent voters and Republicans who reluctantly voted for him in 2016.

This erosion of support is reflected in the fact that Trump is finishing 2017 with an approval rate of 35 percent, the "lowest approval rating of any modern president at this stage of his first term," along with a 59 percent disapproval rating, according to a CNN poll. In case CNN is "too fake" to believe, consider this — among voters who are FOX viewers, Trump's approval rating has plummeted 32 points, from 90 percent in June to 58 percent in December.

To stem the bleeding, Trump pivoted tactically toward the linchpin of his small, hardcore base, Christian evangelicals, and blew the loudest theological dog whistle possible, Jerusalem.

This community, which supports Jerusalem belonging only to Israel for religious rather than practical political reasons and is represented most prominently in the U.S. administration by none other than Vice President Mike Pence, was ecstatic at the Jerusalem announcement.

For evangelicals, the Jerusalem recognition is a necessary step toward the rebuilding of the Jewish Temple (no matter that doing so would mean destroying the third-holiest site in Islam, the Dome of the Rock and the Al-Aqsa Mosque, which currently occupy that space) and sparking the Rapture, the end of times, and the return of the Messiah. In other words, to evangelicals Trump is not just fulfilling a campaign promise, he is fulfilling age-long end-of-time prophecies.

A 2014 Pew survey found that 82 percent of white evangelicals in America believe God gave Israel to the Jewish people. Interestingly, this theological conviction is shared by only 40 percent of American Jews. 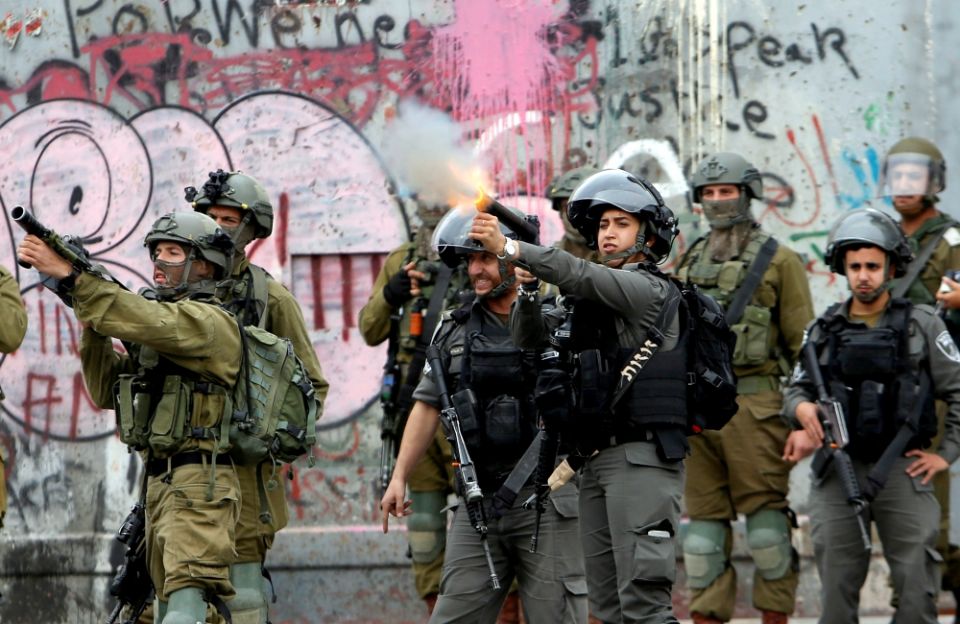 Israeli forces fire toward Palestinians near Ramallah, West Bank, during a Dec. 20 protest against U.S. President Donald Trump's decision to recognize Jerusalem as the capital of Israel. (CNS/Reuters/Mussa Qawasma)

While Trump's Jerusalem decision makes sense in the narrowest tactical way, it is another strategic blunder in an increasing count of strategic blunders that put him at odds with almost every other country in the world. It will damage U.S. interests and standing internationally, both among allies and adversaries.

No matter what obsequious or autocratic Arab leaders tell him in private for their own regional interests, namely countering spreading Iranian influence, the issue of Palestine and especially Jerusalem is a bedrock identity issue for the quarter-billion Arabs and 1.3 billion Muslims worldwide.

Consequently, countries who rise "to the defense" of Jerusalem, such as Iran, will gain Arab street credence, making it much harder for Arab Gulf leaders, namely Saudi Arabia, that might share security interests with Israel, to openly cooperate in any way.

Along with that will be a further increase in Russian influence, already at an all-time high in the region due to the perceived, and arguably real, victory of Russian objectives in Syria at the expense of U.S. ones.

Not to be forgotten is how the Jerusalem announcement will serve as rich propaganda fodder for Islamic militant groups and extremists, with all the possible negative ramifications for American troops, installations, diplomats and civilians in the Mideast. It was not so long ago, in 2013, that Secretary of Defense James Mattis noted: "I paid a military security price every day as a commander of [U.S. Central Command] because the Americans were seen as biased in support of Israel."

Trump would have served U.S. Mideast interests and the U.S. role as an honest peace broker best by leaving Jerusalem until a final peace agreement was reached between Israelis and Palestinians.

Since it is too late for that, he can limit the damage he has done on this issue by declaring that East Jerusalem will serve as the future capital of a Palestinian state. That would truly be a fresh approach.