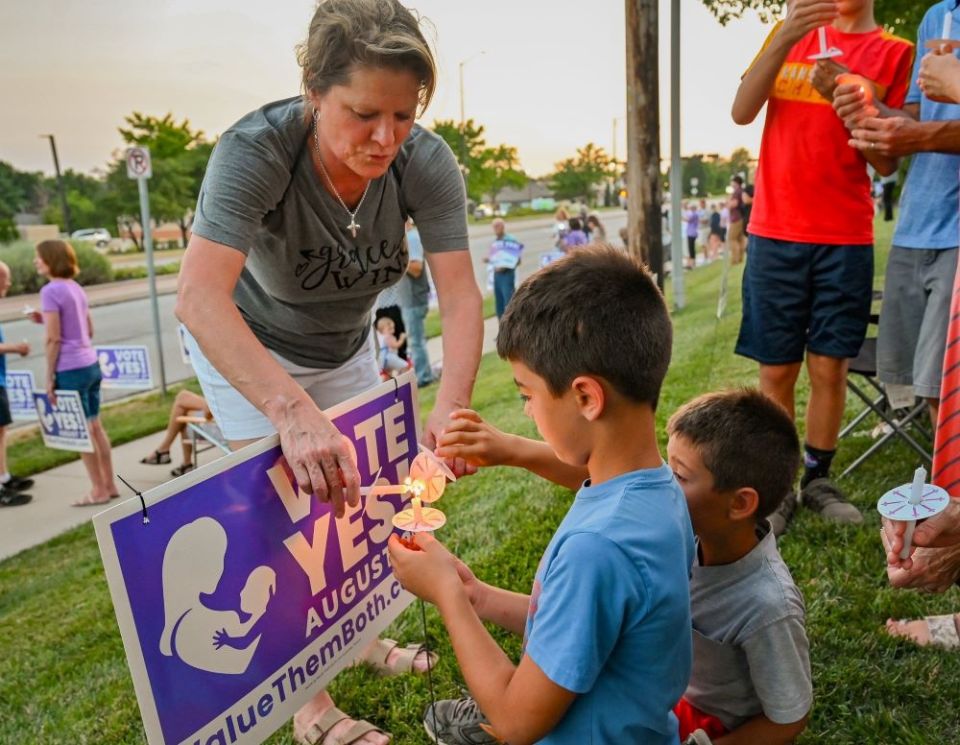 A woman helps two young boys light candles during a "Value Them Both" sidewalk vigil in Olathe, Kansas, Aug. 1. On Aug 2, Kansas voters rejected a ballot referendum that would have amended the state constitution to say there is no constitutional right to abortion in Kansas. (CNS/The Leaven/Kathryn White)

Voters in Kansas gave the first evidence of the backlash against the U.S. Supreme Court's decision to overturn Roe v. Wade and Planned Parenthood v. Casey, voting against an effort to strip abortion rights from that state's constitution. Fifty-nine percent of Kansans voted to keep abortion rights in the state's constitution in an Aug. 2  referendum  issue despite Kansas being an overwhelmingly Republican state: Since 1993, Republicans have controlled both houses of the state legislature.

The New York Times headline spoke to the way Democrats think the abortion issue might play out: " 'Your Bedroom Is on the Ballot': How Democrats See Abortion Politics After Kansas."

The headline in a Politico story looking at the primary results — "Roe jolts the midterms – 5 takeaways from a key primary night" — announced the same verdict.

These are exaggerations. Once you got past the "political earthquake" language, both The Times' and the Politico report made the obvious and important point about the difficulty extrapolating from the Kansas referendum to the midterms.

"And the result in Kansas isn’t a perfect indicator of how voters will treat abortion in candidate races," the Politico report states. "The question voters were deciding there was a state constitutional amendment that would have cleared a path for the state legislature to ban abortion, not a candidate race where multiple issues and personalities are at play."

Inflation will likely still be the top concern among voters come November, not abortion, and candidate names, not individual issues, will be facing voters.

Might the credibility of the church's witness have been more persuasive if some of that money had gone to implement robust paid family leave policies at Catholic institutions?

Still, midterms, like primaries, are usually low voter turnout events. In Kansas, turnout was 50% higher Aug. 2 than what it was in 2018's midterm primaries. Voters motivated by the desire to preserve abortion rights might keep what looks like an expected Republican wave from turning into a Republican tsunami in the midterm election in November. The latter only occurs when a large number of marginal races all go in one direction. Motivated pro-choice voters might keep many of those marginal contests from going Republican.

The long-term effects may take some time to be felt. Republican state legislators who have pledged themselves to enacting rigorous bans on abortion might think twice. Most voters are not comfortable with either an extreme pro-life position or an extreme pro-choice position. And, just as the party that wins the White House is almost always going to lose the next midterm election, a kind of buyer's remorse law of politics, the backlash against overturning Roe is likely to have more juice at the ballot box than exists among those celebrating their win at the Supreme Court.

The result also comes despite big spending on both sides of the issues, which brings us to the role the Catholic Church played in the Kansas referendum. The Kansas City, Kansas, Archdiocese spent $2.5 million in support of the measure. Combined with funding from the Dioceses of Wichita and Salina, as well as the Kansas Catholic Conference, official Catholic organizations contributed more than half the total spent on the effort to pass the referendum.

Was the church's money well spent? Might the credibility of the church's witness have been more persuasive if some of that money had gone to implement robust paid family leave policies at Catholic institutions? As my NCR colleague Stephanie Clary recently reported, most Catholic institutions lag woefully behind in providing the kind of parental leave expectant mothers need. The campaign to remove abortion rights from the Kansas constitution was called "Value Them Both," but it is not clear how much the Catholic Church really does value working women who have just become moms if it is unwilling to provide women with time to care for a newborn.

The pro-life witness of the Catholic Church has also been compromised by the willingness of many U.S. bishops to isolate abortion among other life issues. It is true abortion differs from, say, fighting climate change: A negative, absolute prohibition against taking human life seems to resonate more forcefully in the Catholic moral imagination than does a positive, complex invitation to protect the environment. The latter claim also involves a degree of prudential judgment to choose among policies that is not the case with abortion.

That said, abortion is more complicated than many pro-lifers let on. Criminalizing abortion in the early stages of pregnancy is likely to produce the same kind of effect that Prohibition did in the 1920s.  "… An absolute ban on the procedure would be imprudent and unenforceable," wrote senior writer Paul Baumann at Commonweal. "Law has an important pedagogical function and should reflect the value the community places on fetal life, but because of the unique burdens of pregnancy, the battle against abortion can only be won in the moral and cultural arena. Laws that a majority of Americans disagree with will be resisted and circumvented."

No one knows what effect the Catholic Church might have had on the "moral and cultural arena" these past 40 years if church leadership had embraced the consistent ethic of life for which Cardinal Joseph Bernardin advocated. The church's relentless focus on political and juridical resolutions of the abortion issue also have not strengthened its case in the moral and cultural arena. For many morally serious people in this country, the alliance pro-life groups made with former President Donald Trump was the last straw.

That said, I fear that the libertarianism of the age has bit many Catholics and the poison has spread. As Baumann also noted, discussing a recent email he got from the group Catholics for Choice, "there isn’t anything recognizably Catholic about this approach to politics or internal Church disagreements." He called their approach "especially galling," and it is. The group never even acknowledges the possibility that unborn life has any value, or even that human life is a gift from God.

Moral consistency is especially important now that the abortion issue has been kicked back not only to the states, but from the judiciary to the political branches of government. The lesson from Kansas is that Americans are likely to resist extreme pro-life legislation. (I wish there was more resistance to extreme pro-choice legislation in the blue states!)

Can Catholics help our society become more truly supportive of pregnant women and new mothers? Can our church articulate a moral vision that will reverse the devastation on the culture's moral sensibility wrought by the acids of libertarianism? Only if we follow the lead of Pope Francis whose pastoral sensibilities, and aversion to political manipulation, are always front and center.

Editorial: Extremist attitudes on abortion get us nowhere