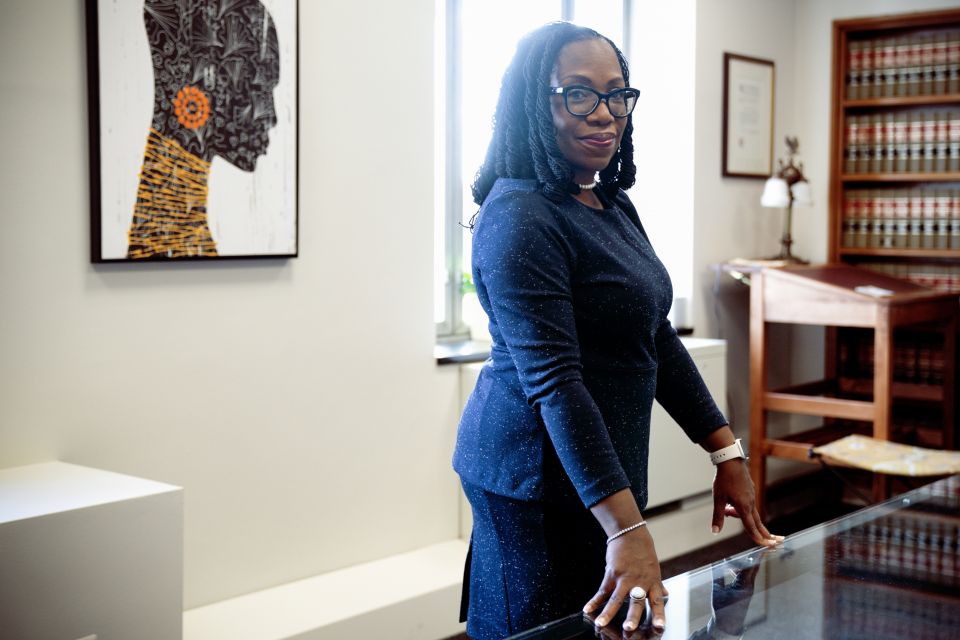 Ketanji Brown Jackson, a U.S. Circuit judge on the U.S. Court of Appeals for the District of Columbia Circuit, poses for a portrait Feb. 18 in her office conference room at the court in Washington. President Joe Biden nominated her to the U.S. Supreme Court, making her the first Black woman selected to serve on a court that once declared her race unworthy of citizenship and endorsed segregation. (AP/Jacquelyn Martin)

Judge Ketanji Brown Jackson will begin her confirmation hearings today in front of the Senate Judiciary Committee. There is little doubt she will be confirmed, because the Democrats currently control both the committee and the full Senate, albeit by the slimmest of margins.

Judge Jackson's resume is as impressive as that of any nominee in my lifetime. Like most her future colleagues on the high court, she went to an elite university and law school, Harvard for both, and served as an editor on the law review. She clerked for Justice Stephen Breyer, whose seat she will take once she is confirmed. She was nominated to be a District Court judge in 2012 by President Barack Obama and was confirmed on a bipartisan vote. Last year, she joined the Court of Appeals for the District of Columbia, the second most important bench in the judiciary.

When Breyer announced his retirement at the end of January, I expressed the hope that President Joe Biden would nominate someone with experience in one of the other branches of government. I tossed out the idea of naming Congressional Rep. Val Demings of Florida. Jackson does not have such experience, but that cannot be held against her, since it was not held against any of her future colleagues when they were nominated.

Additionally, Jackson will be the first Supreme Court justice to have worked as a public defender, an experience that could prove invaluable on a variety of cases involving criminal justice issues.

There is a farcical quality to the drama, with theatrical presentations and all the actors wearing elaborate intellectual makeup. To defeat a nominee, you need to find a personal scandal: It is considered bad form to oppose a supremely qualified nominee simply because you disagree with his or her judicial philosophy, when that should be the best and only reason to oppose a particular nominee.

The influence of Judge Jackson’s faith was obvious when President Biden introduced her as his nominee. She began her comments by "thanking God for delivering me to this point." At ABC News, White House reporter Devin Dwyer looks more closely into her religious background as well as the way senators have probed the subject with previous nominees.

It is clear that Jackson is no deist. Conservative legal scholars who embrace originalism tend to forget that the deistic god of Thomas Jefferson and George Washington was not the Christian God. The deistic god made the world and then left it alone. For Christians, both liberals and conservatives, God is providential, a God who is always interfering one way or another.

"The Bible is filled with people who, through faith, were able to see beyond the present, to a world of hope and glory," she said in a 2011 talk at Montrose Christian School, a Baptist-affiliated school in Rockville, Maryland. "God knows what lies ahead of each of us. The best that you can do, as you look forward, is to take the long view." Jackson is a Christian.

It is also clear that she, like previous nominees, constructs an intellectual wall between her personal, religious beliefs and her jurisprudence. "Any personal views about religion would never come into my service as a judge," she told Sen. Josh Hawley during her confirmation hearing to become a judge on the U.S. Court of Appeals last year.

Hawley's behavior during the last Supreme Court confirmation hearing was noteworthy. Before President Donald Trump had nominated Judge Amy Coney Barrett, the ambitious and somewhat unhinged Hawley had pledged "I will vote only for those Supreme Court nominees who have explicitly acknowledged that Roe v. Wade is wrongly decided." Once Barrett was nominated, Hawley fretted: "I hope that no senator on the other side will ask her to pledge her vote one way or another. And I certainly won't."

There is no reason to think Hawley will have improved his moral and intellectual consistency since then. He has now attacked Judge Jackson, arguing that when she served on the U.S. Sentencing Commission, she was not tough enough on sex offenders. Hawley tweeted that "her record endangers children." He failed to note that the cases he cited were unanimous, and the commission is a bipartisan one.

I would not put it past the Republicans to pepper Jackson with questions about her attitudes on racial issues that might come before the court. They widely criticized President Biden for announcing he would nominate a Black woman when the vacancy first came about, until people remembered that Ronald Reagan had made a similar pledge, to nominate the first woman to the court, when he was campaigning for the presidency in 1980. Besides, as a federal trial judge, Jackson has not been particularly sympathetic to claims of racial bias in employment practices.

While President Volodymyr Zelensky and the brave people of Ukraine fight for democracy and the rule of law in the streets of Kyiv and Mariupol, you would think that their struggle might inspire American politicians to remember that politics is not simply about power or the adjudication of interests. As Sarah Binder and Russell Wheeler of the Brookings Institution point out, however, while most Supreme Court nominations were approved by near unanimous margins through the presidency of Bill Clinton, since then, they have become far more partisan affairs. This is partly the cost of partisan redistricting: If an incumbent only has to be worried about a primary challenge from the far right or left, they dare not vote for a nominee who will arouse the ire of their party's base.

Once she is on the bench, I am sure I will agree with some of Justice Jackson's rulings, and disagree on others. But there is no doubt she is qualified and more than qualified. The Senate should confirm her.