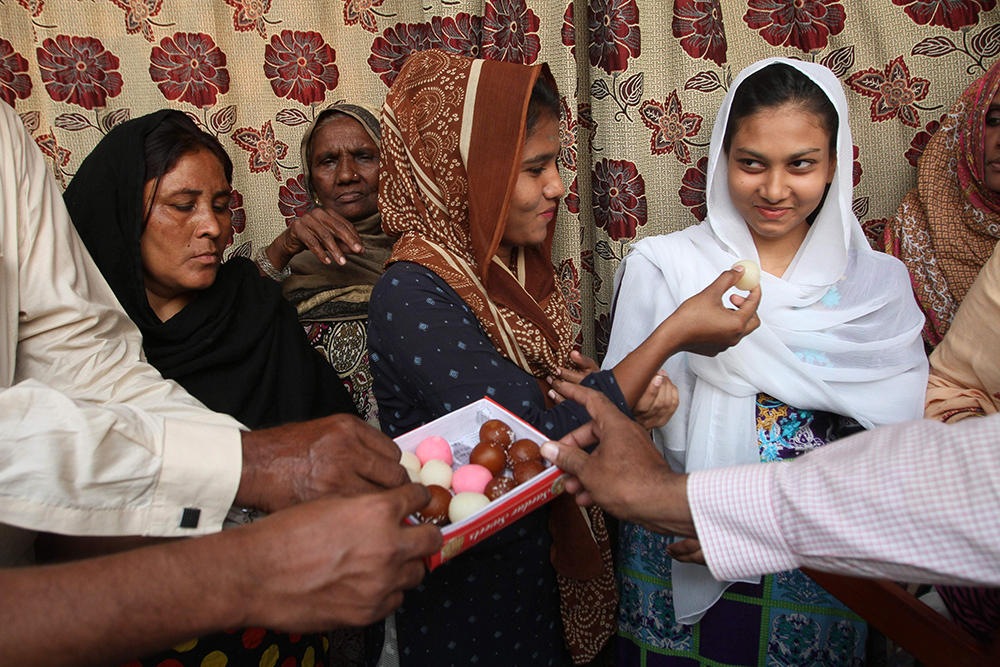 Pakistani Christians distribute sweets to celebrate the acquittal of Asia Bibi, a Catholic mother of five who had been on death row since 2010 accused of blasphemy, in Multan, Pakistan, on Oct. 31, 2018. The Christian community in Pakistan now fears attacks as Christmas nears. (AP/Irum Asim)

For the first time in nine years, Asia Bibi will be with her husband on Christmas.

But many of her fellow Christians in Pakistan are afraid of a backlash this holiday season in the wake of Bibi's October exoneration by the nation's Supreme Court on blasphemy charges.

Recent cases of abductions, allegations of blasphemy and hate crimes against Christians, who make up 2 percent of the South Asian country’s population, have led churches to beef up security as parishioners sing carols around bonfires and watch Nativity dramas.

"This is the best time for us. We plan the Christmas play throughout the year and arrange several programs in the festive season," said a 17-year-old college student in Lahore. "But it is a tense situation in the country. We hope that the government will facilitate us in marking our religious season."

A mother of five, including three stepchildren, Bibi was arrested on blasphemy charges in 2010 after she allegedly insulted the Prophet Muhammed during an argument over whether she should have drunk from the same water bucket used by her Muslim co-workers on a farm.

Pakistan's Supreme Court acquitted her of the charges. That sparked unrest in Pakistan as Islamic hard-liners called for her death. She and her husband are now in hiding in a government safe house.

The backlash has led many Christians to tone down their celebrations this year.

"We used to conduct carol singing in our neighborhood every Christmas," said Natasha Joseph, a 31-year-old housewife in Karachi. "This year we are scared to use loudspeakers as some Muslims might complain."

Some Christians will stay inside this Christmas.

Ishtiaq Masih, a 47-year-old security guard in Lahore, usually takes his family to the zoo and then joins other relatives for a picnic in the city's botanical garden after their Christmas festivities. Not this year.

"This has been our ritual for years," he said. "There is a threat of attack in public spaces for my family."

Christian survivors of that and other attacks feel unsafe participating in festivities.

"I have asked my family to just pray at home," said Haroon Gill, 50, a schoolteacher in Quetta who was in the church. "There is no need to risk their lives. The children are upset. They won’t participate in the Christmas programs. I don’t have much of a choice knowing how our church was attacked last year and I was injured."

It’s not the first time Christians have felt targeted for openly expressing their faith.

In 2016, on Easter Sunday, militants killed more than 90 people in a suicide bombing at Gulshan-e-Iqbal Park in Lahore. An affiliate of the Pakistani Taliban, Jamaatul-ul-Ahrar, took responsibility, saying that it targeted the Christians.

"Ever since the Easter attack, we fear going to crowded places," said Iqbal Masih, 42, an electrician who lost family members in the bombing. He said the climate has grown more fearful since the Bibi decision. "Muslims are angry at us. They don’t want to see us celebrating."

The United States last week added Pakistan to its blacklist of countries that violate religious freedom over the treatment of minorities in the country.

Secretary of State Mike Pompeo said he had designated Pakistan among "countries of particular concern" in a congressionally mandated annual report.

"In far too many places across the globe, individuals continue to face harassment, arrests or even death for simply living their lives in accordance with their beliefs," Pompeo said in a statement. "The United States will not stand by as spectators in the face of such oppression."

According to the U.S. Commission on International Religious Freedom, about 40 people in Pakistan are currently jailed on blasphemy charges.

"We decorated our house with a Christmas tree. Our landlord made it an excuse to ask us to vacate the upper portion of the house," said Malik. "Intolerance has increased in Pakistan."

Human rights activist Wilson Chowdhry of the British Pakistani Christian Association criticized Pakistan’s government for not doing more to protect Christians. He noted that Bibi and her husband, Ashiq Masih, would spend their holiday away from her children, who are staying with a friend.

"Despite her joy at being free I cannot believe that Asia Bibi is feeling like much of a winner today," said Chowdhry.