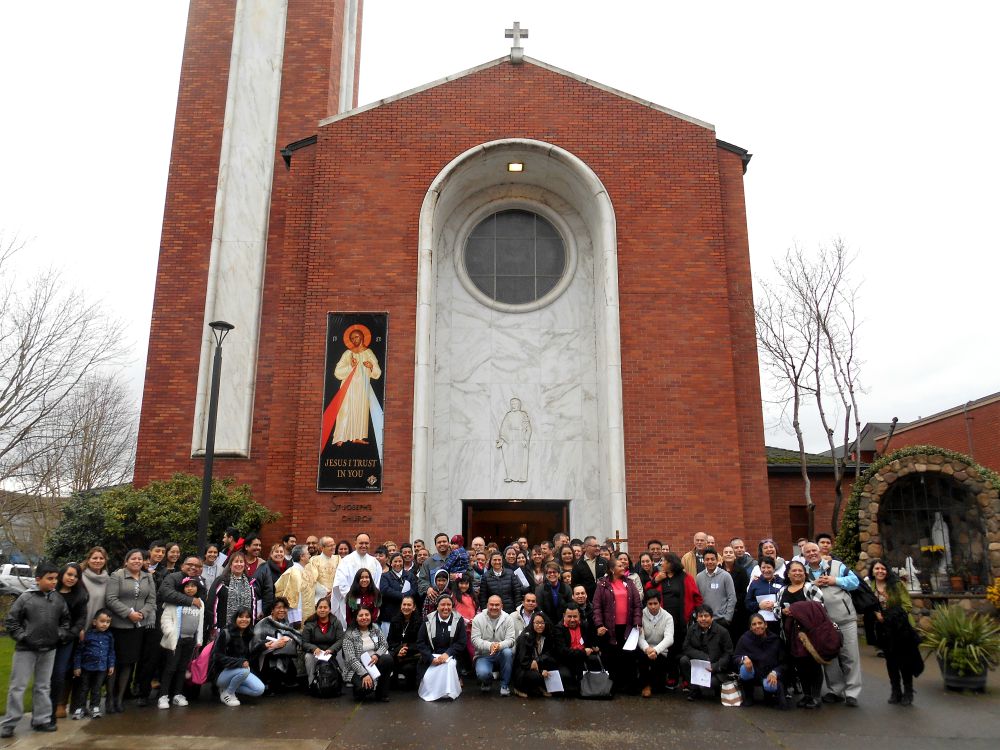 About 300 participants of the Portland Archdiocese encuentro pose outside of St. Joseph's Church Jan. 27 where the meeting took place. (Peter Feuerherd) *

Send the word out. We are a church on a mission. Get comfortable inviting neighbors to church.

The theme of evangelization is not unusual at church gatherings. Still the encuentro gathering for the Archdiocese of Portland, Oregon, held at St. Joseph's Church here Jan. 27, offered a new urgency with a particular focus on the number 60.

That is the estimated percentage of Catholics in the archdiocese who are of Latino background among 431,000 Catholics in western Oregon, a state with a decidedly Anglo reputation and a low rate of church participation. The future of the archdiocese lies in its ability to retain and expand what has become its Hispanic base.

The encuentro conference attracted some 300 parish leaders who discussed what they see as priorities for Hispanic ministry in western Oregon.

The meeting was a preliminary to a regional encuentro for Region 12, consisting of Oregon, Washington, Idaho and Alaska, all states experiencing gains in Latino population, that will be held this spring. That meeting will conclude with the sending off of delegates to the national V Encuentro to be held near Dallas, Texas, in September.

The priorities that emerged from the Oregon meeting here will be tabulated by archdiocesan officials in early February. One issue that did emerge early on was the importance of Latino youth. 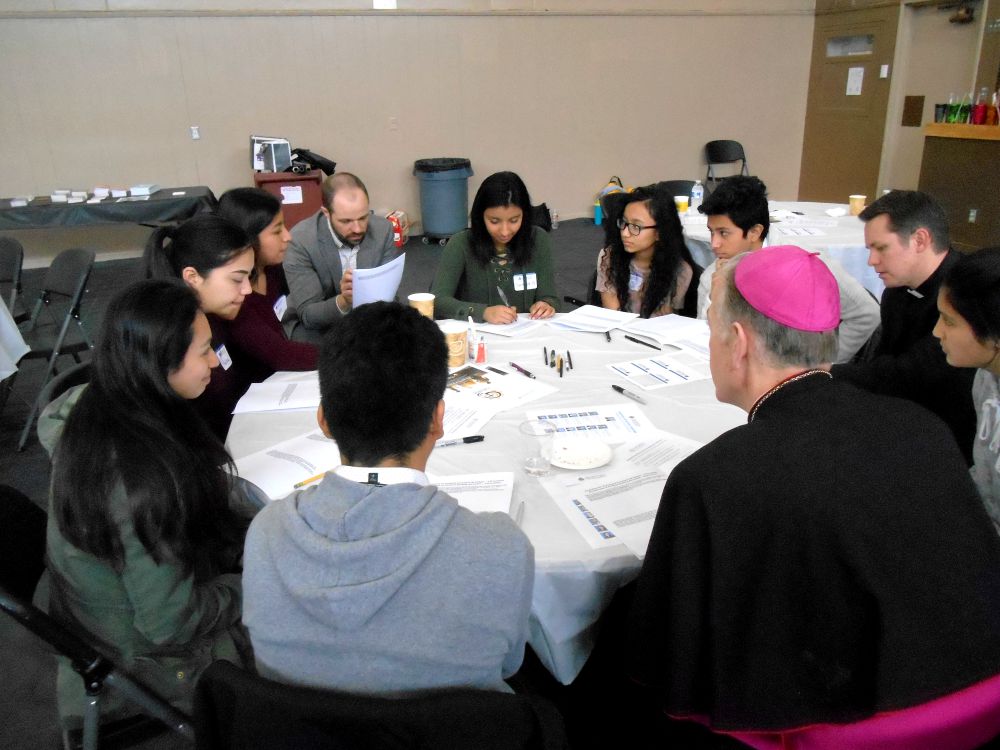 Archbishop Alexander Sample was part of the youth discussion table. "I am not going to say a word. I am here to listen," he said before a morning discussion. Other table discussions revolved around the increasing role of evangelical churches in the Latino community, and how Catholics could counteract that by offering better Bible study. Another concern was family life, particularly the need to regularize marriages of couples with children who have lived together for many years, and also issues faced by the divorced.

Sample's chance to talk came during his afternoon address to the larger group.

He called upon participants to take to heart Pope Francis' comment that the church's ministers should take upon themselves "the smell of the sheep." Pastors, he said, should sometimes lead from the front, in the midst of the flock, and sometimes from behind, "to make sure that no one is left behind." While pastors have a role to play, evangelization includes all the baptized, Sample said, so that our "encounter with Jesus Christ really moves us to share that encounter and love with others." 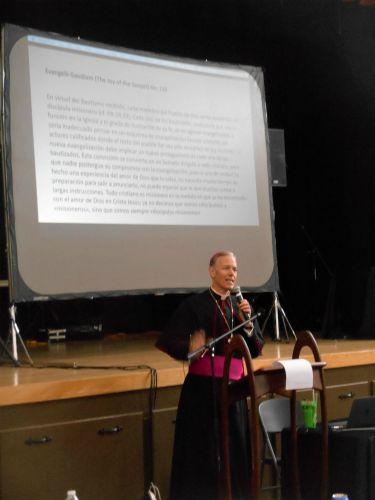 Archbishop Alexander Sample urged Catholics, Latinos and non-Latinos, to see themselves as one community. (Peter Feuerherd)

He urged Catholics, Latinos and non-Latinos, to see themselves as one community. Latinos, he said, are the majority of the church in western Oregon, not a small group off to the side needing special help. "We can't see the Hispanic community as one we are ministering to," he said.

Sample challenged encuentro participants "to get out there and do" evangelization, inviting others directly into parish life, even if that is often a difficult task for Catholics.

Common obstacles to that spirit were addressed at the ongoing table discussions.

More regular outreach to Latino Catholics is needed, said Fr. Mike Walker, pastor of St. James Church (Iglesia de Santiago) in McMinnville, Oregon. "There are more parishes that need a Mass in Spanish," he told NCR. (According to its website, St. James offers four weekend Masses: Saturday vigil and Sunday Mass, one each day in English and in Spanish.)

Sometimes, he said, pastors don't recognize the need. While Latinos may come to cluster in neighborhoods, they will not necessarily come to the Catholic parish if there is no welcome in their language.

"I had a priest tell me that there were no Hispanics in his area," said Walker, even though he was talking to a pastor in urban Portland with a high-growth Latino population, who are in the stores, shops and on jobs, if not yet in Catholic churches. 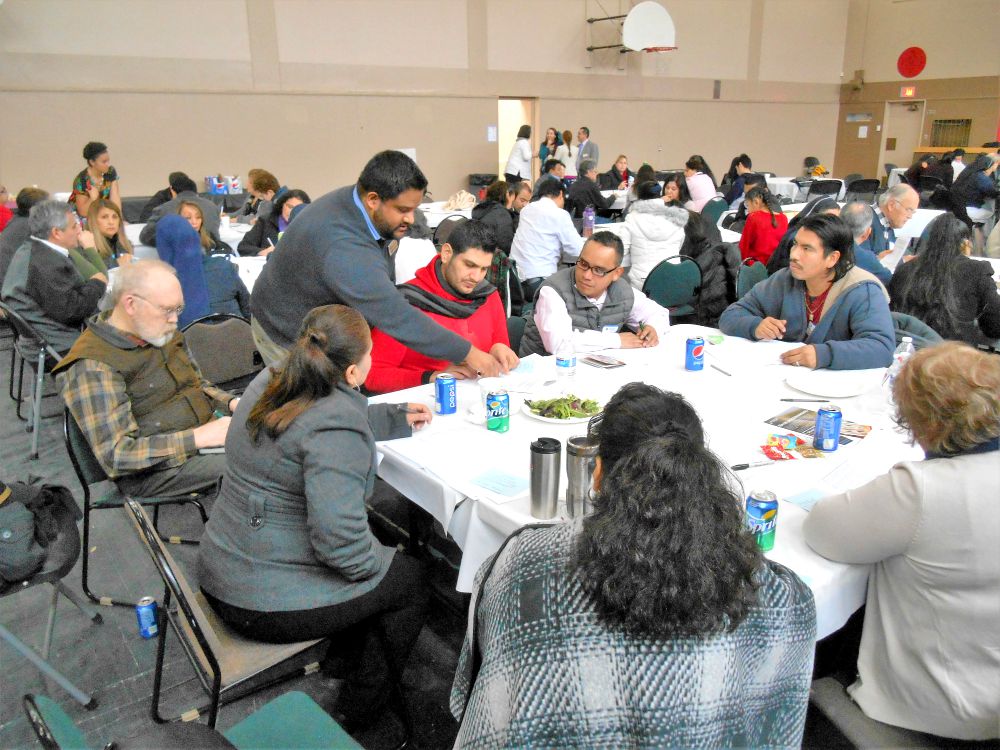 Common obstacles to the spirit of evangelization were addressed at the ongoing table discussions. (Peter Feuerherd)

Walker said that many Anglo parishioners need for their faith to supersede their politics and be supportive of their fellow Catholics struggling with immigration issues even if that view contradicts many in their political party.

Oscar Miranda, from Tigard, Oregon, said there is a need for priests who are comfortable in hearing confessions and counseling in Spanish. That kind of fluency goes beyond what is required from simply being able to recite liturgical Spanish and has been met, in some parishes, via the introduction of priests from Colombia and other Latin American countries. Many of the Latinos of Western Oregon are of Mexican background.

In the midst of a time when immigrant concerns remain a controversial part of the national political agenda, there was little public discussion of the issues at the Portland Archdiocese-level encuentro.

Deacon Felix Garcia, director of the archdiocesan Office for Hispanic Ministry, did emphasize the role of the church in providing support for Latino immigrants. Whatever might befall them, he said, the church makes it clear, "You are not alone."

In a preliminary online survey of Portland archdiocesan Latinos, issues such as immigration and worker justice did emerge, as well as the need for more welcoming of Latinos in local parishes, and helping people cope with family separation and loneliness.

In his homily at the concluding liturgy for the archdiocesan encuentro, Sample said that "there are real challenges for the Hispanic community in Western Oregon."

Noting the Gospel of the day, in which Jesus consoles his apostles not to fear a storm (Mark 4:35-41). Sample said "the Lord's challenge to us is not to be afraid, to have faith because he is with us in the boat."

*The top caption has been corrected with the number of attendees.