Cardinal Pell on the Vatican and vindication 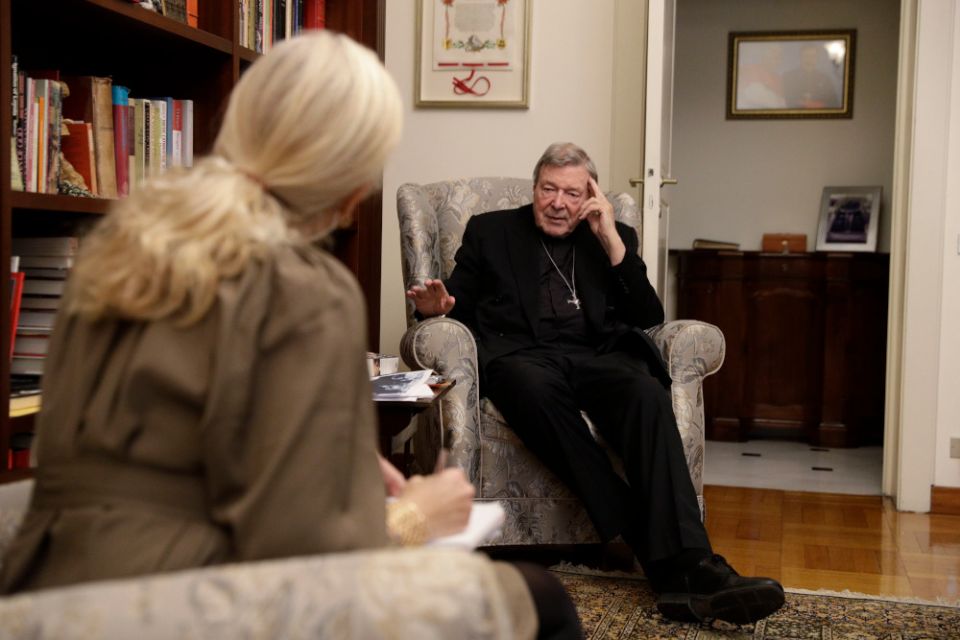 Cardinal George Pell answers a question during an interview with the Associated Press inside his residence near the Vatican in Rome, Monday, Nov. 30, 2020. The pope’s former treasurer, who was convicted and then acquitted of sexual abuse in his native Australia, said Monday he feels a dismayed sense of vindication as the financial mismanagement he tried to uncover in the Holy See is now being exposed in a spiraling Vatican corruption investigation. (AP Photo/Gregorio Borgia)

Rome — The pope’s former treasurer, Cardinal George Pell, said Monday he feels a dismayed sense of vindication as the financial mismanagement he tried to uncover in the Holy See is now being exposed in a spiraling Vatican corruption investigation.

Pell made the comments to The Associated Press in his first interview since returning to Rome after his conviction-turned-acquittal on sexual abuse charges in his native Australia. Pell told the AP that he knew in 2014 when he took the treasury job that the Holy See’s finances were “a bit of a mess.”

“I never, never thought it would be as Technicolor as it proved,” Pell said from his living room armchair in his apartment just outside St. Peter’s Square. “I didn’t know that there was so much criminality involved.”

Pell spoke to the AP before the Dec. 15 release of the first volume of his jailhouse memoir, “Prison Journal,” chronicling the first five months of the 404 days he spent in solitary confinement in a Melbourne lockup.

Pell left his job as prefect of the Vatican's economy ministry in 2017 to face charges that he sexually molested two 13-year-old choir boys in the sacristy of the Melbourne cathedral in 1996. After a first jury deadlocked, a second unanimously convicted him and he was sentenced to six years in prison. The conviction was upheld on appeal only to be thrown out by Australia’s High Court, which in April found there was reasonable doubt in the testimony of his lone accuser.

In the prison diary, Pell reflects on the nature of suffering, Pope Francis’ papacy and the humiliations of solitary confinement as he battled to clear his name for a crime he insists he never committed.

Pell and his supporters believe he was scapegoated for all the crimes of the Australian Catholic Church's botched response to clergy sexual abuse. Victims and critics say he epitomizes everything wrong with how the church has dealt with the problem.

In the book, Pell makes repeated reference his three years at the Vatican trying to impose international accounting, budgeting and transparency standards on the Holy See’s notoriously siloed bureaucracy, where prefects guard their money, turf and power as fiefdoms.

That secretive culture has come under a microscope as Vatican prosecutors investigate the Vatican secretariat of state’s 350 million-euro investment in a London real estate venture and the tens of millions of euros in donations from the faithful that it paid to Italian middlemen to manage the deal.

After more than a year of investigation, no one has been indicted, though a handful of Vatican officials and Italian businessmen are under investigation. Pell said he is watching the developments as they unfold.

“It just might be staggering incompetence,” he said of the scandal, adding that he hoped eventual trials would ascertain the truth.

“It would be better for the church if these things hadn’t happened, if I wasn’t vindicated in this way,” he said. “But given that they have happened, it’s quite clear," that the reforms he sought to impose were necessary.

Pell, with his rather brusque, no-nonsense Australian sensibilities, clashed frequently with the Vatican’s Italian old guard as he sought to get a handle on the Vatican’s assets and spending. His most well-known nemesis was the then-No. 3 in the Vatican’s secretariat of state, Cardinal Angelo Becciu.

Pell famously boasted in 2014 that he had “discovered” hundreds of millions of dollars that were “tucked away in particular sectional accounts and did not appear on the balance sheet” — a reference to the secretary of state’s in-house asset portfolio that Becciu controlled that never appeared on the Vatican’s consolidated financial statements.

Becciu hasn’t been charged in the corruption investigation, but it came as little surprise that Pell issued a blistering statement after Francis on Sept. 24 fired Becciu, over apparently unrelated allegations of embezzlement, which Becciu denies.

Pell congratulated Francis then and said: “I hope the cleaning of the stables continues in both the Vatican and Victoria,” a reference to his home state of Victoria, where he was initially convicted.

After Pell returned to Rome last month, he had a well-publicized private audience with Francis.

“He acknowledged what I was trying to do," Pell said of the pope. “And, you know, I think it’s been sadly vindicated by revelations and developments.”

Pell and his lawyers have suggested a possible link between the resistance he faced in his reform efforts at the Vatican and his forced departure from Rome to face prosecution in Australia.

“I hope for the sake of the church, there’s nothing in it,” Pell said. “In fact — I say that quite sincerely — because some Australian people, my own family, said to me: ’Well, if the Mafia is going after you or somebody else is going after you, that’s one thing. It’s a little bit worse if it comes from within the church.”

Pell said he’s not sure if there is a connection or not.

“But I think we will find out, whether there is or there isn’t,” he said. “Certainly the party’s not over.”

A version of this story appeared in the Dec 11-24, 2020 print issue under the headline: Cardinal Pell on the Vatican and vindication .

People | Cardinal Pell on the Vatican and vindication