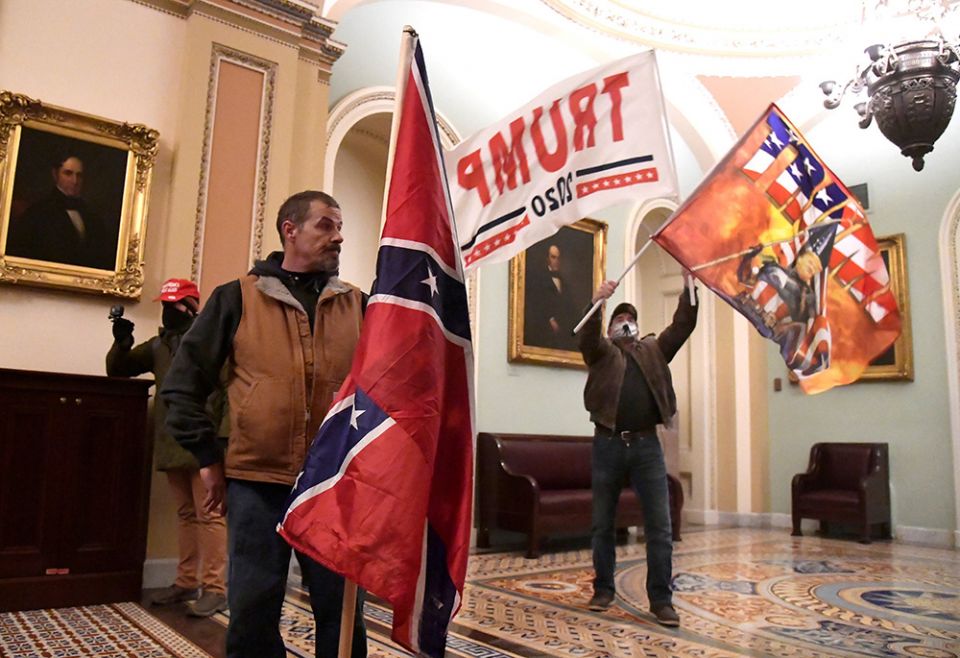 2021 continued to show our need to connect with each other and focus on important issues like our floundering commitment to democracy, the morality of getting a coronavirus vaccine, and Pope Francis' attempt to make structural changes in the church.

NCR's opinion, commentary and editorial writers addressed all of these topics (and more).

These 10 pieces were NCR's most read — not necessarily the most important — opinion articles and commentaries of the year. They are listed in order by the number of site visitors who read the story, with short summaries of their contents. We posted a separate article about our most read news stories yesterday.

1. How Catholics got conned by Donald Trump

In early January, a week before the newly elected Joe Biden was to be sworn in as president, NCR published this essay by Franciscan Sr. Fran Ferder, a clinical psychologist, and Fr. John Heagle, chair of the Gospel Nonviolence Working Group for AUSCP (the Association of United States Catholic Priests).

In the essay, Ferder and Heagle said that former President Donald Trump conned many Americans, including Catholics, into voting for him because of his so-called "pro-life" stance. But, in 2017, a team of 27 mental health professionals wrote a book outlining the danger that Trump posted to the U.S. and to the world.

"They described an impulsive, callous man with a history of multiple failed businesses," Ferder and Heagle wrote. "This 'has been' reality TV personality was revealed as a hedonist who cared only about his own self-interest. He had a reputation for using and abusing women, borrowing money that he did not pay back and getting revenge against people he deemed disloyal to him. His resume suggested sociopathic narcissism.

"We had elected him president of the United States."

2. Editorial: Catholics need to confess their complicity in the failed coup

On Jan. 6, a mob of violent insurrectionists stormed the U.S. Capitol building, trying to stop the formal counting of the Electoral College vote for the legally elected next president of the United States, Joe Biden.

In NCR's editorial, which ran the following day, we speculated on who was to blame for the attack, including Donald Trump, who touted the nonexistent election fraud and the House Republicans and senators who had planned to object to the results.

"But also among those with some culpability for yesterday's failed insurrection are more than a few leaders in our church. Catholic apologists for Trump have blood on their hands," we wrote. "This is the culmination of what this presidency has been about from the beginning — and some Catholics have remained silent, or worse, cheered it along, including some bishops, priests, a few sisters, right-wing Catholic media and too many people in the pro-life movement."

In March, Pope Francis named Cardinal Joseph Tobin of Newark, New Jersey, to be a member of the Congregation for Bishops, an appointment that made perfect sense, according to NCR political columnist Michael Sean Winters.

Tobin worked in the curia of the Redemptorists in Rome, where he would have become acquainted with the situation of the church throughout the world in ways few American bishops have. Tobin is also a Redemptorist priest, a missionary order that jives with Francis' urging for the church to conceive of itself in missionary terms.

"Tobin is not only the kind of leader Francis wants — someone close to the people, not a culture warrior, and with a heart for the poor and the marginalized — he is also genuinely well liked by his brother bishops," Winters wrote.

"In the weeks following Pope Francis' Traditionis Custodes, the motu proprio rendering his decision to revoke the permissions to celebrate the traditional Latin Mass contained in the 2007 motu proprio Summorum Pontificum, there has been a great deal of wailing and gnashing of teeth by those who champion the old rite," wrote NCR political columnist Michael Sean Winters in an August column.

"Many of them have proven why Pope Francis was right to do what he did: The traditional Latin Mass had become an incubator for division. Schism is in the air along with the incense."

Winters listed several conservative Catholics who were critical of the pope's decision, adding that their reaction proves that Francis made the right decision.

"The traditional Latin Mass led to a distorted ecclesiology and, at least in America, opened a new battlefront in the culture wars," Winters wrote. "If you doubt the pope was right, you have only to listen to his critics."

M. Therese Lysaught, a corresponding member of the Pontifical Academy for Life, argued in a September commentary that Catholics who support other Catholics to request religious exemptions from vaccine requirements are not basing their arguments on the basis of Catholic teaching on the primacy of conscience.

When Catholics argue that the vaccines are "morally compromised," they are distorting Catholic teaching on conscience, Lysaught wrote.

This position also "ignores most of the necessary components of Catholic moral discernment — our liturgical identity, charity and the virtues, the consensus position of magisterial authority, Catholic social teaching and even principles of Catholic bioethics," she said. 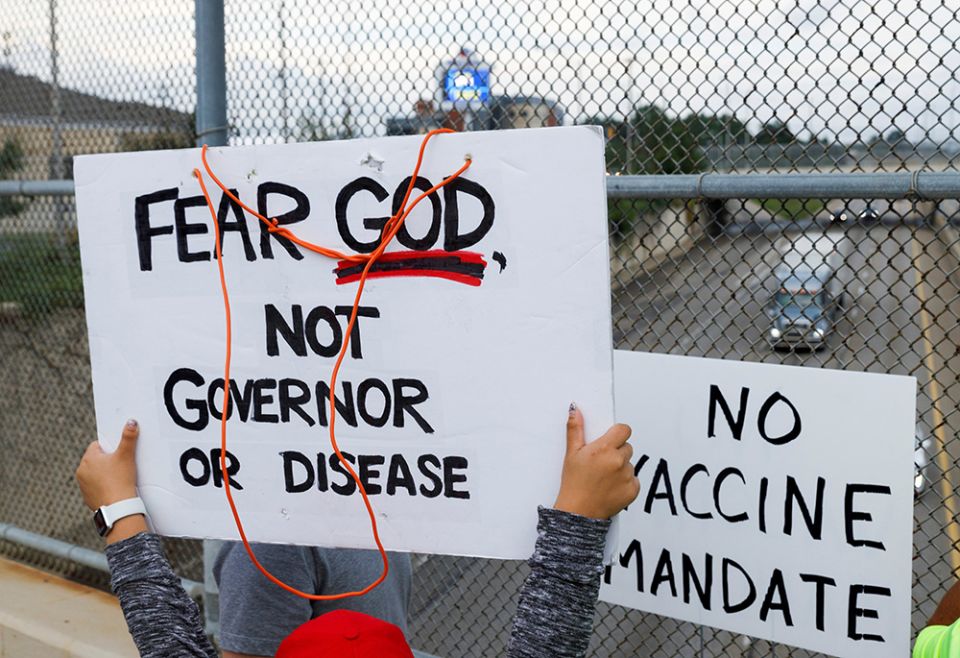 People raise signs against a chain-link fence to show drivers on Ohio state Route 8 during an Aug. 16 protest against the COVID-19 vaccine mandates at Summa Health Hospital in Akron, Ohio. (CNS/Reuters/Stephen Zenner)

Responding to Pope Francis' January address to participants in a meeting of the National Catechetical Office of the Italian bishops' conference, NCR political columnist Michael Sean Winters said the addressed warranted attention because it shows why the opposition to Francis is "rooted in the desire to put the Vatican II toothpaste back into a pre-conciliar tube."

"This we must remember: Behind the opposition to Francis is opposition to Vatican II," Winters wrote. "The church in Latin America from which the pope came has been the locus of the most fertile theology since the council. The bishops there have received the council in ways we in the north have not, and it is time for us to listen and to learn. They have never stopped posing the question: What does it mean to exercise a preferential option for the poor?"

7. Bishops throw cold water on the most Catholic inauguration in history

Following President Joe Biden's January inauguration, Los Angeles Archbishop José Gomez, president of the U.S. bishops' conference, released a statement acknowledging that there would be areas where the bishops could work with the new administration but also warning that Biden had "pledged to pursue certain policies that would advance moral evils and threaten human life and dignity, most seriously in the areas of abortion, contraception, marriage, and gender." Gomez added: "Of deep concern is the liberty of the Church and the freedom of believers to live according to their consciences."

"Biden was the man of the hour, and his Catholic faith was evident in the way he rose to meet the moment," NCR political columnist Michael Sean Winters wrote the following day. "The bishops may not have realized that. They can go pound sand. Most of us are profoundly grateful this good and decent man is now our president." 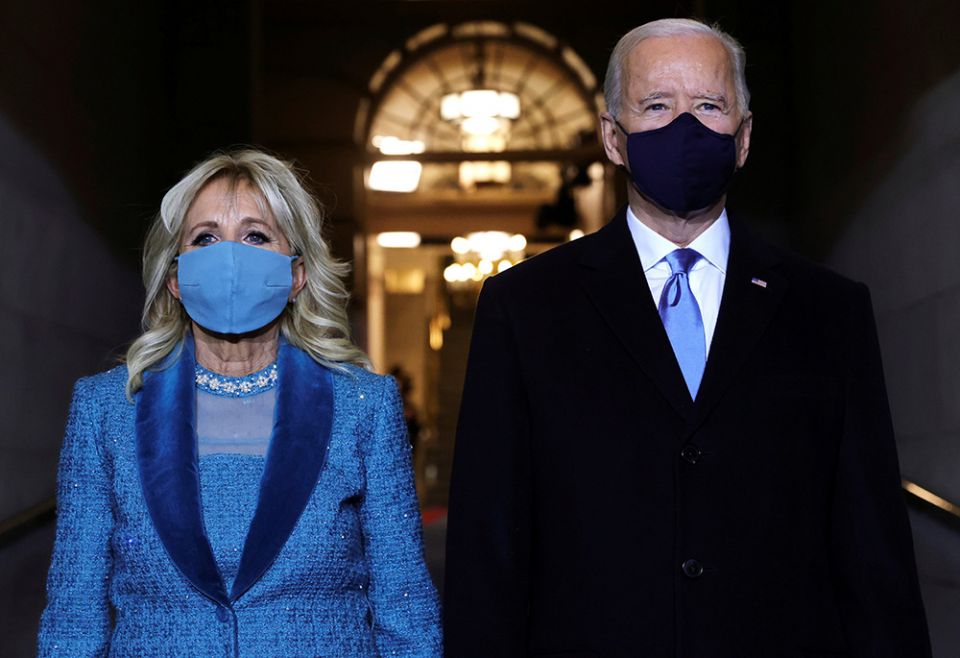 President-elect Joe Biden and Jill Biden arrive for his inauguration at the U.S. Capitol in Washington Jan. 2021. (CNS/pool via Reuters/Win McNamee)

Maier's column presented the results of confidential interviews Maier had conducted with 28 U.S. bishops in recent months, citing, among other things, their worry "about interference with the selection process at the Roman congregation level."

Winters asked: "Does this article reflect the views of the bishops as a body? Are they all, or at least a majority, 'frustrated' with the pope?"

9. Can the Catholic Church agree to change anything?

In an April column, Phyllis Zagano tackled the perennial question: Can the Catholic Church actually change? We know the church can change, Zagano wrote, because it has, usually to maintain clerical power.

"But is there fear that change will cause the far right to take their money and run?" Zagano asked. "You may recall that the church leaves many questions open because, as theologian Hans Küng points out, 'it is impossible to obtain some sort of consensus.' "

And in October, NCR political columnist Michael Sean Winters called out former Philadelphia Archbishop Charles Chaput for his article in First Things, which appeared to allege that Pope Francis is a liar.

Chaput was ostensibly responding to an article published in America magazine in which Austen Ivereigh discussed Pope Francis' comments about EWTN, the conservative Catholic media network. But the central contention of Chaput's article is this: "And any suggestion that EWTN is unfaithful to the Church, the Second Vatican Council, or the Holy See is simply vindictive and false."

"Being unfaithful to the church is exactly what Francis said EWTN was," Winters said. 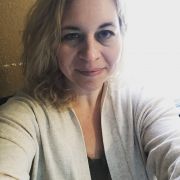 Stephanie Yeagle is NCR managing editor. Her email address is syeagle@ncronline.org. Follow her on Twitter at @ncrsly.

People | Conned by Trump, a failed coup: NCR's top 10 opinion and commentary in 2021