Could Catholic letter to editor be behind Bush's cancellation of talk? 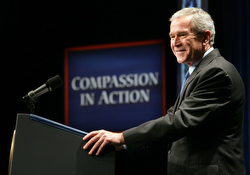 SALYERSVILLE, Ky. -- President George W. Bush will no longer be spending "A Day Among Friends, Part 2," as advertised, at St. Mark's Catholic Church, Richmond, Ky., May 3. The cancellation -- or postponement -- could be because of the content of a letter to the editor in the Lexington Herald-Leader that was headlined: "Bush visit offers contrast with Catholic teaching."

The letter, signed by Glenmary Fr. John S. Rausch as director of the Catholic Committee of Appalachia, stated, in part, "Because this is a presidential election year, many people could interpret his visit as an endorsement of his party."

Last May, former First Lady Laura Bush, a former school librarian and U.N. Ambassador for the Global Literacy Decade, was invited to St. Mark's as a guest speaker promoting literacy. The event also served as a fundraising event for St. Mark's Church and school and as a promotional event for the First Lady's new book, Spoken from the Heart. She was there to read to schoolchildren from St. Mark's and other area schools and to address a lunch.

Tickets for that initial "A Day Among Friends" ranged from $150 to $2,500 (the latter included having a photograph taken with the former First Lady). Each ticket-holder received a copy of the book.

Sichko is no stranger to celebrity, though apparently less familiar with controversy. His "Evenings With Friends" have included visits by Dolly Parton, Bill Cosby and others. But the visit by the former president was celebrity of a different order of magnitude.

Rausch told NCR he circulated drafts of the letter among Catholic Committee of Appalachia members for their input before sending it to the Herald-Leader, where it suggested the former president's visit could be a "teachable moment about Catholic social principles":

"While Republicans encourage fiscal responsibility and certain freedoms, an element of the party wants to balance the budget on the backs of the poor, shield billionaires from paying their fair share and gut the Environmental Protection Agency that protects mountain people from the greed of corporate America.

The letter said Bush as president had enforced policies that "violated tenets of the Catholic moral code ... initiating the Iraq war, which many historians consider a war of choice," disregarded Pope John Paul II's teaching that the war was not just, authorized torture and, as governor of Texas, approved a record number of executions.

It concluded, "If the president's visit occasions a deeper discussion of social ethics, fine. If not, his visit to a Catholic church appears inappropriate."

As of press time, a telephone call to the former president's office regarding the reason for the cancellation or postponement had not been returned.

[Arthur Jones is NCR books editor. He was in Kentucky for the celebrations marking the 200th anniversary of the founding of the Sisters of Loretto. Read news from that event in the NCR print edition and on NCRonline.org.]

People | Could Catholic letter to editor be behind Bush's cancellation of talk?