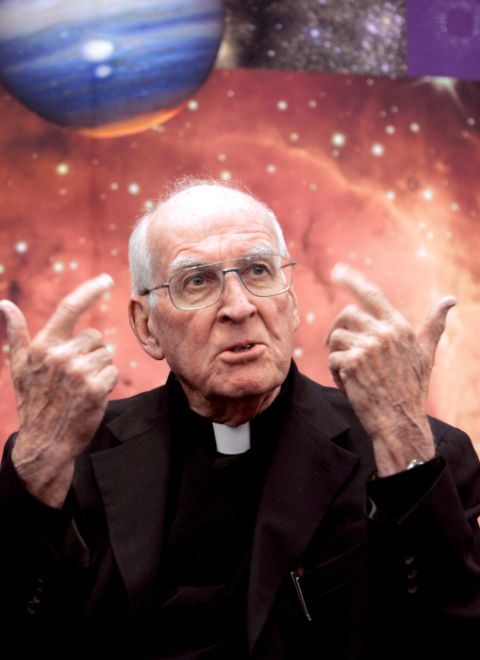 Washington — Jesuit Father George V. Coyne, who led the Vatican Observatory as its director for 28 years, got his start in the field of astronomy as a young student in formation for the priesthood by secretly studying under his blanket, flashlight in hand.

Throughout his life, Coyne, who died Feb. 11 in Syracuse, New York, at age 87 from bladder cancer, credited a forward-thinking professor of classical Greek for nurturing his passion by arranging for him to borrow astronomy books from a local library. That foresight led Coyne to become one of the world's most respected and well-known Jesuit scientists.

Coyne served as Vatican Observatory director from 1978 to 2006, overseeing the modernization of its facilities, raising its profile in the science world and welcoming a new international generation of Jesuit astronomers to its staff. He first joined the observatory staff as an astronomer in 1969 and held the position until 2011.

He also served from 2007 to 2011 as director of the Vatican Observatory Foundation.

Jesuit Brother Guy Consolmagno, the Vatican Observatory's current director, recalled the first words from Coyne when he joined the observatory staff in 1993: "Do good science."

"He created a space where we were all free to pursue that science," Brother Consolmagno told Catholic News Service Feb. 13. "He acted as a firewall between us and the vagaries of the Vatican. He made us welcome and he made our collaborators and visitors welcome."

Coyne, he said, created an atmosphere that attracted young astronomers from around the world and established a program for adjunct scholars who could be affiliated with the observatory, use its facilities and spread its name without living on site. The arrangement opened the door for women to join the staff, he said.

"George did a lot to promote women in astronomy," Consolmagno said, explaining how his predecessor initiated the biennial Vatican Observatory Summer School for astronomy graduate students. Nearly half of the students were women, and the program helped develop young astronomers in the developing world, he said.

Coyne most recently was on the faculty of Le Moyne College in Syracuse, where he had taught astronomy while holding the McDevitt Distinguished Chair of Religious Philosophy since 2011.

"We are deeply and profoundly saddened by the passing of Father Coyne. His influence on so many fronts was profound," Linda LeMura, Le Moyne's president, said in a statement.

"Le Moyne was privileged to have him here for the past eight years, and he spent the final years of his life doing what he loved — teaching young people about astronomy," she said.

Coyne was widely known for promoting conversations on the intersection of theology and science.

A 1987 letter from St. John Paul II to Coyne on the 300th anniversary of Isaac Newton's "Principia," which described the laws of motion, prompted the Jesuit to write extensively on Catholic theology and the relationship of science and faith. Among his most widely known works was the 2002 book "Wayfarers in the Cosmos: The Human Quest for Meaning," co-written by fellow Vatican Observatory astronomer Father Alessandro Omizzolo.

He was instrumental in organizing conferences in the 1990s on "God's Action in the Universe" at Vatican Observatory headquarters in Castel Gandolfo, Italy, in collaboration with the Center for Theology and the Natural Sciences of Berkeley, California.

In a 2010 interview with Catholic News Service after receiving the George Van Biesbroeck Prize from the American Astronomical Society, Coyne said he believed that Jesuit astronomers can make unique contributions to the dialogue involving theology and science. "But I have insisted ... we have no reason entering into this dialogue unless we are doing hardcore research," he said.

Research was an important part of Coyne's astronomical legacy. His work included the study of the lunar surface that helped guide NASA as it planned the Ranger missions and the Apollo crewed missions to the moon. He also conducted research on Mercury's surface, interacting binary star systems that give off sudden bursts of intense energy, and Seyfert galaxies, a group of spiral galaxies with small and unusually bright star-like centers.

Born Jan. 19, 1933, in Baltimore, Coyne spent nearly all of his priesthood as an astronomer.

After graduating in 1951 from a Jesuit-run high school near Baltimore, Coyne entered the Jesuit novitiate in Wernersville, Pennsylvania. He earned a bachelor's degree in mathematics and a licentiate in philosophy from Fordham University, a doctorate in astronomy from Georgetown University and a licentiate in sacred theology from Woodstock College.

Coyne soon thereafter joined the staff of the University of Arizona Lunar and Planetary Laboratory and held various positions with the lab while taking on additional responsibilities and eventually becoming its associate director in 1977.

His appointment as Vatican Observatory director in 1978 came under the brief tenure of Pope John Paul I. That same year he also became associate director of the University of Arizona's Steward Observatory. For a year beginning in 1979 he was acting director and head of the observatory and the university's astronomy department.

Coyne is survived by his brothers Thomas and Francis.

A funeral Mass will be celebrated Feb. 17 in Panasci Chapel at Le Moyne College. Burial will be in the Jesuit cemetery in Wernersville.

Meet the pope’s astronomer, who says he’d baptize an alien if given the chance