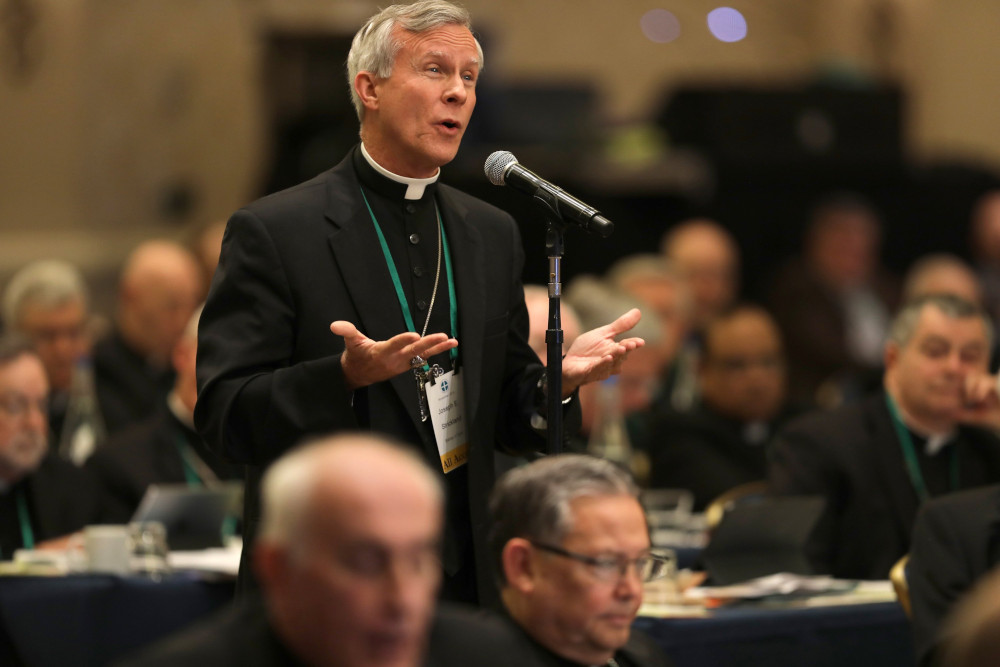 Bishop Joseph Strickland of Tyler, Texas, speaks from the floor during the 2019 general assembly of the U.S. bishops' conference. (CNS photo/Bob Roller)

Bishop Joseph Strickland of the Diocese of Tyler, Texas, has become well-known for challenging advocates for abortion rights and those who want to make the COVID-19 vaccines mandatory, justifying his positions by invoking interpretations of Catholic teaching.

But last month, he took a step that defied Catholic protocol: He challenged his fellow bishops.

In a tweet on Jan. 18, Strickland backed Fr. Anthony Buś, a priest in Chicago who had pushed back on Pope Francis' new restrictions on saying the pre-Vatican II Latin Mass — in opposition to the views of Buś' superior, Cardinal Blase Cupich, the Archbishop of Chicago.

"I've re-read Fr Buś's letter and I see nothing disrespectful in his tone or in his actual words," Strickland wrote. "It is a heartfelt cry from a priest who is hurting deeply & speaks for many, many others. He should be comforted rather than being disciplined."

Fr. John Beal, a canon lawyer and professor at The Catholic University of America, called the tweet a sharp break from church norms.

"The idea of an individual bishop in a small diocese in Texas taking a public stand contrary to the Cardinal-Archbishop of Chicago is unprecedented," Beal said, referring to Cupich. "We never did that before."

As U.S. politics have become more polarized in recent years, the Catholic Church has seen conservative Catholics become uncommonly comfortable with rebuking messages from the Vatican or their own American clergy. The most outspoken are lay Catholics, but debates sparked by Pope Francis' papacy, the 2020 presidential election and the ongoing pandemic have encouraged some clergy to draw lines in the sand as well.

But experts say that even in this atmosphere, a bishop openly challenging not only the pope's messages but his brother prelates breaks new ground.

The next day, Strickland also tweeted in support of a Vermont priest who had publicly defied his bishop by refusing to be vaccinated or submit to masking and testing and making a video to explain his position. Fr. Peter Williams, a pastor in Springfield, Vermont, described his position as that of a "patriot" and rejected Bishop Christopher Coyne's insistence that the directive was a matter of "honor and obedience."

"Please pray for this priest & so many others caught up in similar situations," Strickland tweeted, including Williams' video in his tweet.

The one-two punch was enough to inspire National Catholic Reporter columnist Michael Sean Winters to call for an "apostolic visitation" of Strickland.

"If (Strickland) wants to be crazy in East Texas, who is to stop him?" Winters wrote. "But commenting on how other bishops should deal with their priests? Who does that? What does he know about these situations?"

Publicly disciplining Strickland would be unusual, said Beal, describing Strickland's actions as "unseemly but not illegal" under church law.

"In our polarized world, the norms of civility and decency have just broken down," he said.

Dissent within the Catholic Church is hardly new, said Natalia Imperatori-Lee, chair of the religious studies department at Manhattan College. "Progressive Catholics have been saying for a long time that bishops are not branch managers, and Rome is not the home office," she said.

But public dissent among clerics has triggered pushback from church authorities in the past. In the 1980s, Archbishop Raymond Hunthausen, an outspoken liberal cleric, was subjected to an apostolic visitation — or Vatican investigation— by the Congregation for the Doctrine of the Faith, headed by then-Cardinal Joseph Ratzinger, later Pope Benedict XVI.

Hunthausen was forced to share authority with a newly appointed auxiliary bishop after the investigation concluded he was guilty of "weak doctrinal leadership" in several areas.

But Beal noted the inquiry was widely seen to be driven by conservative backlash, particularly to a speech Hunthausen gave denouncing the stockpiling of nuclear weapons.

Benedict's papacy also included pushback to dissent. In 2012, his last full year as pope, the Vatican investigated U.S. Catholic nuns in what was seen as a crackdown after an umbrella organization of American nuns voiced support for the Affordable Care Act in defiance of the USCCB, which opposed the legislation.

Since being elevated to bishop that same year, Strickland has cultivated his reputation as a right-wing dissident. He has a weekly podcast, "The Bishop Strickland Show," hosted by the anti-abortion website LifeSiteNews and available on Rumble, an alternative Canadian video platform popular with political and social conservatives.

Strickland has conducted interviews with Church Militant, a right-wing Catholic website whose criticism of then-Atlanta Archbishop Wilton Gregory, now a cardinal and archbishop of Washington, was decried as homophobic or racist. The site, based in Michigan, was reprimanded by the Archdiocese of Detroit in 2011.

Strickland posed for photographs with Church Militant staff last fall shortly before the group protested the USCCB's annual meeting in Baltimore. Multiple speakers at the event praised Strickland or cited him as an inspiration.

The bishop's reputation has put him in conversation with a network of right-wing activists both inside and outside of the Catholic Church. At the December 2020 "Jericho March" in the run-up to the U.S. Capitol attack, Strickland offered a prayer via video. Earlier that year, the bishop publicly backed a Wisconsin priest who insisted Catholics could not vote for Democrats, and reiterated his support when church authorities limited the cleric's ministry in 2021. Strickland tweeted that the priest was "in trouble for speaking the truth."

In October, Strickland tweeted praise for a speech delivered by actor Jim Caviezel that included criticism of Pope Francis and was delivered at a conference connected to the conspiracy theory-driven QAnon movement.

Catholics who sometimes chafed under the conservative leadership of Pope John Paul II and his successor, Benedict, are now nonplussed to see conservatives bridle under Francis. Many conservatives, they note, insisted on obedience to church authorities during the papacies of Benedict and John Paul II.

"I grew up being called a cafeteria Catholic, knowing full well that everyone is in the cafeteria," said Imperatori-Lee, referring to a common criticism of liberal Catholics as picking and choosing which Catholic teachings to follow, as if in a cafeteria line. "But now the people who were throwing stones about cafeteria Catholicism and dissenting theologians are the ones leading the charge … It's this incredible upside-down world."

She said conservatives appear to have embraced passionate dissent only "when they have the ability to be famous cultural warriors."

Indeed, Strickland's views on the pandemic — an emerging culture war issue — have garnered him the most attention. He has repeatedly condemned all three vaccines authorized for use in the U.S., arguing that they are "abortion tainted," because in developing the vaccines, pharmaceutical companies used cell lines believed to trace their origins to aborted fetuses from the 1970s and 1980s. (The cell lines, which are clones with a distant link to the original cells, are commonly used in medical laboratories and are not in the vaccines themselves.)

Strickland, who declined an interview request from Religion News Service, maintained his opposition even after the Vatican deemed mRNA-based vaccines "morally acceptable" in December 2020, a sentiment the USCCB echoed a short time later. Francis, who is vaccinated himself, has repeatedly campaigned for widespread vaccination, and the Pontifical Academy for Life has directly refuted vaccine skeptics on social media, saying in a tweet that "abortions have nothing to do" with the vaccines.

In addition, Strickland has contested the vaccines' safety. On a recent episode of "The Bishop Strickland Show," a host argued COVID-19 vaccines are uniquely prone to triggering adverse effects, despite ample scientific evidence attesting that such side effects are rare. When the host asked Strickland if parents should refrain from vaccinating their children with the shots, the bishop replied: "Absolutely." He quickly added that vaccination needs to be a "free choice," but stressed parents should be "very careful" about vaccination against COVID-19.

Other bishops have expressed doubts about the vaccines. San Francisco Archbishop Salvatore Cordileone has encouraged people to get vaccinated but revealed in December that he is not vaccinated himself, explaining his stance by saying his immune system is strong and arguing that COVID-19 inoculations are "not really vaccines" — a falsehood.

But none has championed the cause more than Strickland, who has shifted to railing against government vaccine mandates. He tweeted in November 2021: "To encourage these vaccines is a personal choice but to force them violates basic human rights and moral standards."

Here, too, Strickland is out of step with many of his fellow American prelates. Major dioceses in Los Angeles, New York and elsewhere have declared that they would not issue religious exemptions allowing Catholics to opt-out of various vaccine mandates. Bishop John Stowe of the Diocese of Lexington, Kentucky, requires diocesan staff to be vaccinated against COVID-19 "as a condition of their employment."

Meanwhile, the Vatican has its own version of a vaccine mandate in place and requires members of the Swiss Guardwho protect the pope to get the shots.

Whether Strickland's support for dissident priests outside his diocese will trigger a response from the Vatican or his fellow American bishops remains an open question. Beal suggested any hypothetical action may not be public, noting that "public movements against bishops are seen as unseemly" and that similar situations are often mitigated quietly.

Strickland, however, is unlikely to remain quiet. In a recent podcast, he argued that while he does not see himself as a person who seeks out conflict, he won't shy away from it.

"If it's a question of truth and falsehood, we need the conflict."