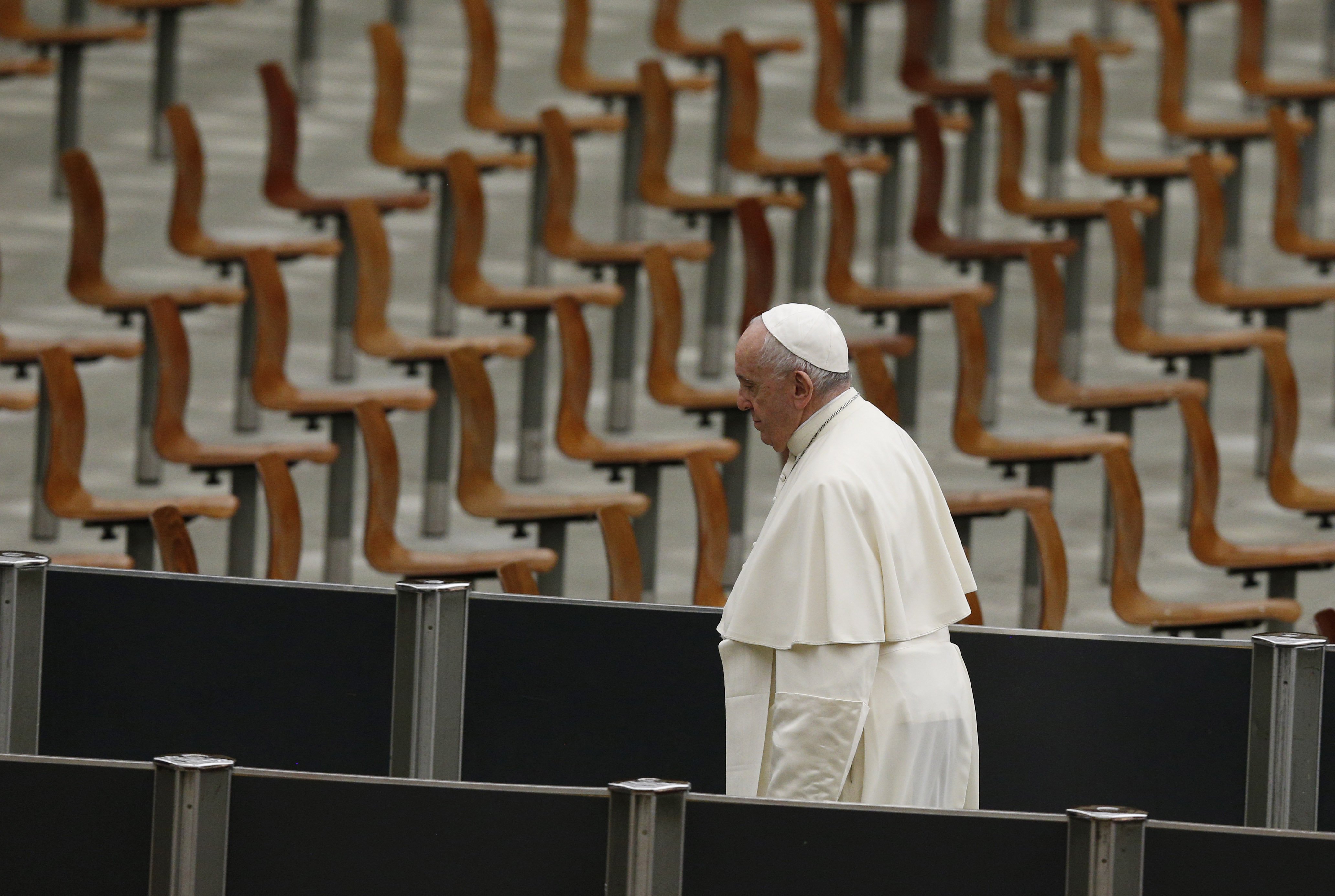 At a rather formal meeting in the Apostolic Palace and a more relaxed one with balloons and silly hats in the Vatican audience hall, Pope Francis told children that Christmas is a sign of how much God loves them, and they are called to share that love.

Meeting in the ornate Clementine Hall Dec. 18 with young members of Catholic Action Children's program, a parish-based program for youngsters 4-14, the formality was not complete.

As a toddler roamed the room, checking out everything, Pope Francis told the parents to let him be and told the other kids that they, too, should have the courage to investigate their surroundings.

The appointment Dec. 19 in the Vatican audience hall was one that included gifts of warm coats and sweets for the little ones and a slightly belated and slightly marred birthday cake for the pope — two of the little ones who helped present the cake each ran a finger through the icing before the singing was over.

Pope Francis had turned 85 Dec. 17 and the children from the Vatican's St. Martha pediatric clinic helped him celebrate. The clinic, run by the Daughters of Charity of St. Vincent de Paul helps families in need both of medical care and of help with clothing, food and diapers. Many of the parents are foreign workers or migrants without access to Italian government assistance or health care.

The Catholic Action children's groups have spent months on a religious education program with the motto, "Tailored for You."

"I like this theme," the pope told them, because it starts with the idea of "clothes made to measure, with accessories appropriate for different people."

"It is beautiful because each of us is a unique person. No two are alike," he said. "We are not photocopies; we are all original!"

"This is how Jesus sees you," Pope Francis said. "He loves you as you are, even if someone does not respect you and thinks you count for little."

"Jesus, who came into the world as a child, believes in a world on a child's scale, on the scale of everyone," he said. "He made us understand this by being born in Bethlehem. But even today he makes himself close to the children of every country and people, and he does so every day. It is the style of God, which is described in three words: closeness, compassion and tenderness. This is God's style, there is no other."

But the pope asked the children to be attentive because "the bad thing is when we want to imitate others and do the things that other people do, from originals we become photocopies."

Especially as Christmas approaches, Pope Francis asked the children to be close to others just as Jesus is close to them, to help their friends and relatives and anyone who seems in need. And, he said, don't forget to talk to Jesus.

With the children in the audience hall the next morning, the pope encouraged them to learn to listen and to see what other people need.

"Listen" is an important word, he told them. "Someone who doesn't listen to others only listens to themselves. And it's boring to only listen to yourself."