by Bruce Schreiner, The Associated Press
People
Coronavirus
This article appears in the Coronavirus feature series. View the full series. 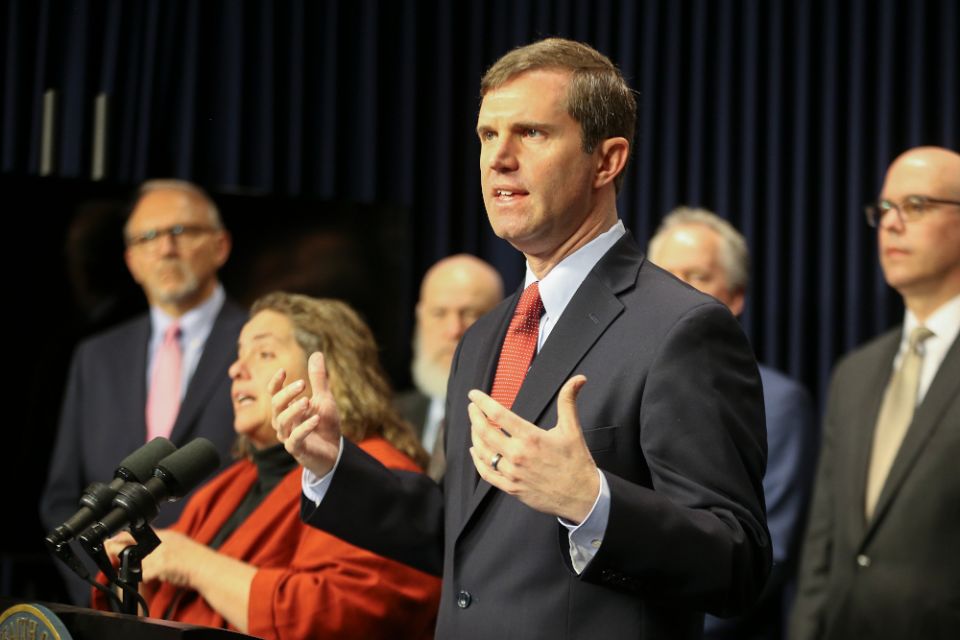 Governor Andy Beshear speaks at the podium at a press conference on the Corona virus and Kentucky's steps to combat the outbreak, Mar. 9, 2020, at the capitol in Frankfort, Kentucky. (AP/Courier Journal/Michael Clevenger)

"I don't believe that whether you go to church during this period of time is a test of faith," Beshear said March 11. "I believe God gives us wisdom to protect each other and we should do that."

The University of Kentucky and the University of Louisville announced March 11 that students would switch to online instruction after spring break through the first few days of April. UofL is extending its break two days to end on March 17. UK's break is next week. Regular classes should resume April 6 at both universities.

Beshear said state prisons are being temporarily closed to visitors, and that non-essential out-of-state travel has been suspended for state employees. He urged private businesses to do the same.

"All of these are aggressive steps, and we believe that they are necessary steps that will help us to ultimately move through this," Beshear said of his administration's actions.

Beshear acknowledged that recommending cancellation of worship services statewide was a "big step" and one likely to draw pushback. But he sees it as necessary to protect public health.

"We know that this (virus) is community spread and we think it's very important to get ahead of it," the governor said.

People can practice their faith at home this week, he said. Beshear, a deacon at his church, said two coronavirus patients in Harrison County attend the same church.

For most people, this coronavirus causes only mild or moderate symptoms, but for a few, especially older adults and people with existing health problems, it can cause more severe illnesses, including pneumonia. More than 120,000 people have been infected worldwide, with more than 4,300 deaths, but the vast majority recover within weeks. The U.S. tally topped 1,000 cases on March 11, with at least 30 deaths.

Eight cases have been diagnosed in Kentucky. Patients range in age from 27 to 69. All eight are receiving medical care in isolation.

The timing is unfortunate for basketball fans. Kentuckians typically descend in droves on the annual Southeastern Conference men's basketball tournament, which is scheduled this weekend in Nashville. The NCAA announced March 11 that only essential staff and limited family will be allowed to attend the men's and women's tournaments, which begin next week.

"I would advise that the SEC tournament follow the NCAA tournament and their decision," Beshear said at a media briefing March 11 evening.

In other steps, the governor asked school districts to develop plans to allow schools to close on short notice if necessary.

"While we are not there yet, it is very possible that in the future we're going to have to ask schools in Kentucky to close down for a period of time," he said.

Schools are closed this week in Harrison County, a rural area in north-central Kentucky where five coronavirus cases have been confirmed. The district turned to a system for students to work from home during bad weather or other situations.

At Western Kentucky University, spring break, which started March 9, will be extended by a week through March 22. Beginning on March 23 through April 5, the university will "transition face-to-face classroom delivery to an alternate delivery format," the school said.

At state prisons, inmates will be allowed one free call each per week and up to two contacts through a "controlled social media source" to communicate with family and friends, state justice Secretary Mary Noble said.

Beshear said his actions aren't an overreaction but were taken to protect public health.

"How we respond to this in the next month, I believe, is going to determine how long we are dealing with it, but also how severe the impacts of the coronavirus are going to be here in Kentucky," he said.

The steps announced March 11 followed other responses by Beshear. On March 10, he announced efforts to severely restrict visits to nursing homes. On March 9, he issued an executive order waiving coronavirus-related copays, deductibles, cost-sharing and diagnostic testing fees for most private insurance and for state employees. The state also removed any impediments for Medicaid recipients to be tested and treated, he said.

Five of the Kentucky patients are from Harrison County, two are in Fayette County and one is in Jefferson County.

"The good news is that all eight ... are stable, are doing well," Beshear said.

People | Governor urges churches to cancel services due to virus