Pastor lingers in limbo after disputed 2016 accusation of exploiting heiress 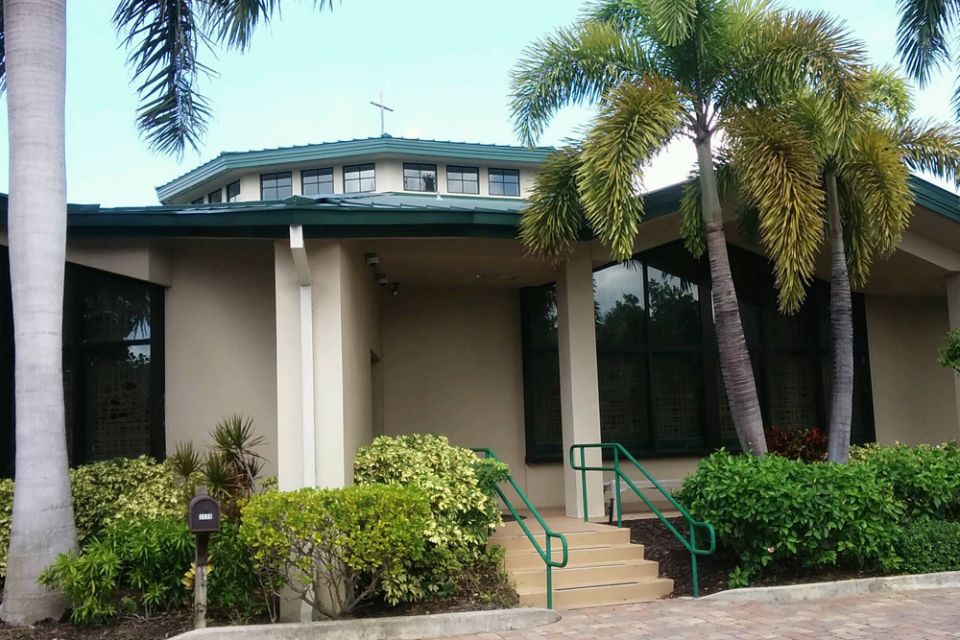 Sanibel Island, Florida — Her friends recall Marion Knott McIntyre as the type of woman who was quick to pick up the tab after Sunday post-Mass breakfast, and would spontaneously offer gifts, sometimes monetary, to people she felt had need. She rarely took no for an answer.

That legacy – Knott McIntyre died a childless widow in December 2017 at 86 years old – has long been in dispute. Was she simply naturally generous? Or was her generosity exploited?

Fr. Christopher Senk, pastor of St. Isabel Church here, was charged by his bishop with improperly influencing McIntyre, a St. Isabel's parishioner, who gave him $25,000-30,000 in gifts over a six-year period, as well as naming the priest in her estate, to the objection of some members of her Maryland-based family.

"Please understand it is my obligation to exercise careful vigilance," Bishop Frank Dewane of the Diocese of Venice, which includes St. Isabel's, wrote to the parish after Senk was expelled from his rectory in October 2016. Senk, pastor at St. Isabel's since 2003, was placed on administrative leave at that time.

The case has played out in an atmosphere both of distrust of the church hierarchy and, conversely, the response of bishops sensitive about criticism of failure to act against ethical lapses by clergy in the past.

A vocal group of parishioners who support Senk have long disputed Dewane's vigilance. They say Dewane is guilty of railroading a popular pastor, known for opening his rectory on holidays to parishioners bereft of family, with the pastor cooking the meals. 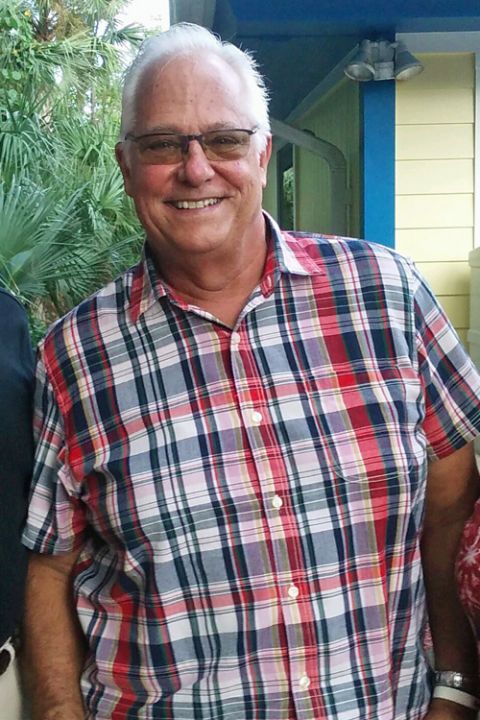 Every Tuesday morning a prayer support group meets at the parish to pray for Senk.

When it began more than three years ago, organizer Genny Gray noted the parish staff marking down license plate numbers in the parking lot. They were monitoring who supported the pastor, she said, part of the ongoing struggle between parishioners who support Senk and those who endorse Dewane.

Today, participants number from a dozen – during the summer offseason here – to as many as 30 during the winter peak.

It's just one sign of the ongoing support for Senk, who was ordered by Dewane to leave his rectory in October 2016, and given 12 hours to vacate the premises. The case subsequently made its way to the Vatican Congregation for the Clergy in Rome, which upheld the suspension of the pastor earlier this year.

On the day of his expulsion, a news crew from a local NBC station arrived, tipped off, said Senk supporters, by the diocese. The priest's suspension led the newscast that evening.

Deacon William Gray, husband of Genny Gray and also a Senk supporter, noted that the case may well have been long forgotten in most parishes. But parishioners here, many of them retirees, have the time and the money to support their beleaguered pastor. They have raised more than $300,000 to pay for church and civil attorneys to pursue his case.

In an era of widespread suspicion of church leadership, some Catholics here see Senk's case as another example of abuse from the hierarchy. Those supportive of the pastor call their group Parishioners for Justice and claim that 85% of parishioners want Senk reinstated.

"People here have the financial means," said Deacon Gray, a professor of civil engineering who led the department at the University of Notre Dame and is a deacon for the Diocese of Raleigh, North Carolina.*

The parish is an integral part of the small resort community. Sanibel Island is a place where million-dollar plus homes and hotels line the shores of Tarpon Bay and the Gulf of Mexico. Connected by causeway to the sprawling and traffic-choked Fort Myers region, Sanibel Island remains a quiet retreat, especially as summer wanes and the northern snowbirds have yet to arrive. The population of some 7,000 swells more than four times in the winter. 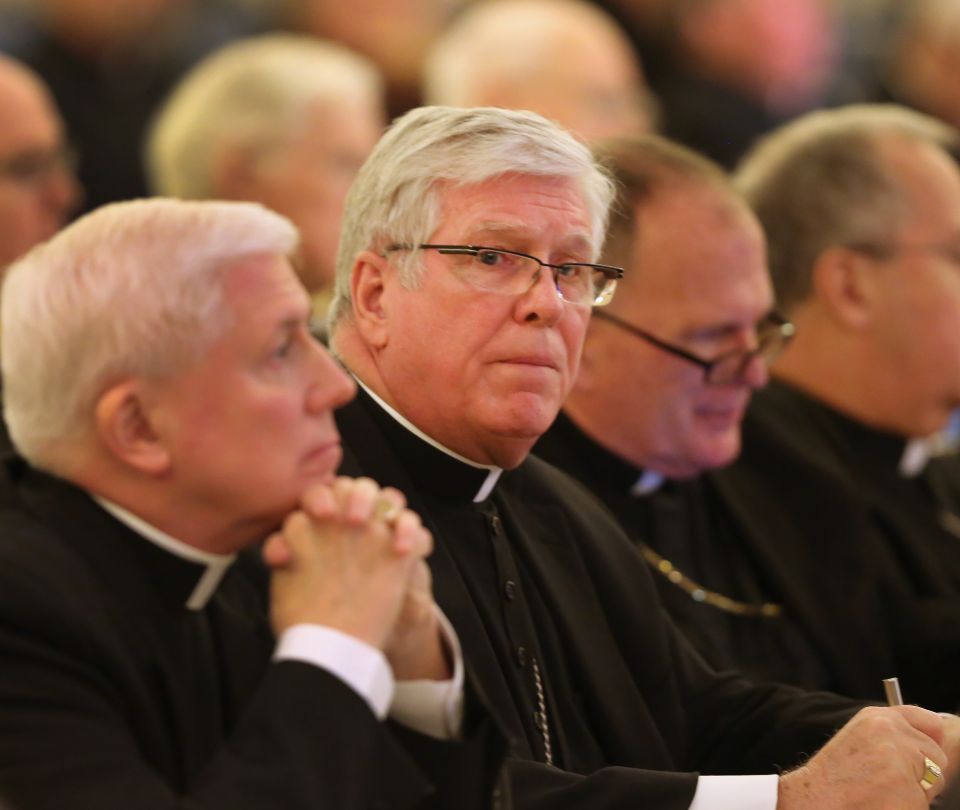 Bishop Frank J. Dewane of Venice, Florida, second from left, is pictured during the Nov. 14, 2017, fall general assembly of the U.S. Conference of Catholic Bishops in Baltimore. (CNS/Bob Roller)

"If he was at a parish without those resources, he would have no chance," Deacon Gray said about Senk.

Dewane appointed Fr. Joseph Gates as parochial vicar to administer the parish. Gates was arrested in August and charged with drunk driving. A new priest will arrive at the parish this fall, with Gates having been appointed to another parish.

Some parishioners see Senk as an involved pastor who led parish tours of Europe and was a trusted counselor. After Hurricane Charlie struck the island in 2006, Senk oversaw the construction of a new church, including an elaborate prayer garden.

Senk supporters painted a picture of McIntyre, a former nun, as one uneasy with her inherited wealth. And they say that Dewane, who worked in the Vatican before being named to Venice, used his influence in Rome to stack the case against Senk.

But the kudos from parishioners have so far had little impact. Senk said that Dewane has cast a pall of suspicion on him ever since he signed a petition casting doubts upon the bishop's leadership style. That petition, sent to the apostolic nuncio in Washington and anonymously signed by other Diocese of Venice priests, said that Dewane was guilty of autocratic leadership.

Ever since signing that petition, Senk said the bishop has led a long campaign against him, including offering credence to charges, later dismissed, from McIntyre family members accusing the priest of stealing jewelry from her hospital room. Charges that Senk exerted undue influence about her estate were also investigated by the Lee County Sheriff's Office, but he was not charged with any crimes.

But Dewane said the priest should answer to a higher authority, namely the diocesan Code of Ethics, which prohibits undue influence exerted on the elderly.

The bishop pointed to a Lee County Sheriff's report which stated that a physician had noted McIntyre's diminished capacity towards the end of her life. He said that a law recently passed in the county, intended to protect the elderly from exploiters, forced his hand. Exploitation of the elderly is seen as a crucial concern in Florida, a state which remains a haven for retirees.

"Had I not acted and you read this report we would be having a different conversation today," he told NCR, noting how bishops have been criticized for failing to act against priests accused of ethical violations.

McIntyre's family declined to speak with NCR. Some parishioners at St. Isabel's backed their bishop and described the Parishioners for Justice group as divisive.

"It's a personnel issue," said Arline Ford, a longtime parishioner, about the dispute.

Joel Hazzard, who comes to Sanibel Island for the winters and lives in Wisconsin, described Gates as a dedicated priest who never received cooperation from Senk supporters. While stating he did not know the full details of the case, "I don't think the bishop would do what he did without reasons."

Senk, 70 years old, a former professor of Scripture at St. Anselm's College in New Hampshire, formerly taught in New Jersey and Washington D.C. He later left the Benedictine order and became incardinated in the Diocese of Venice to escape the health effects of the northern winters. 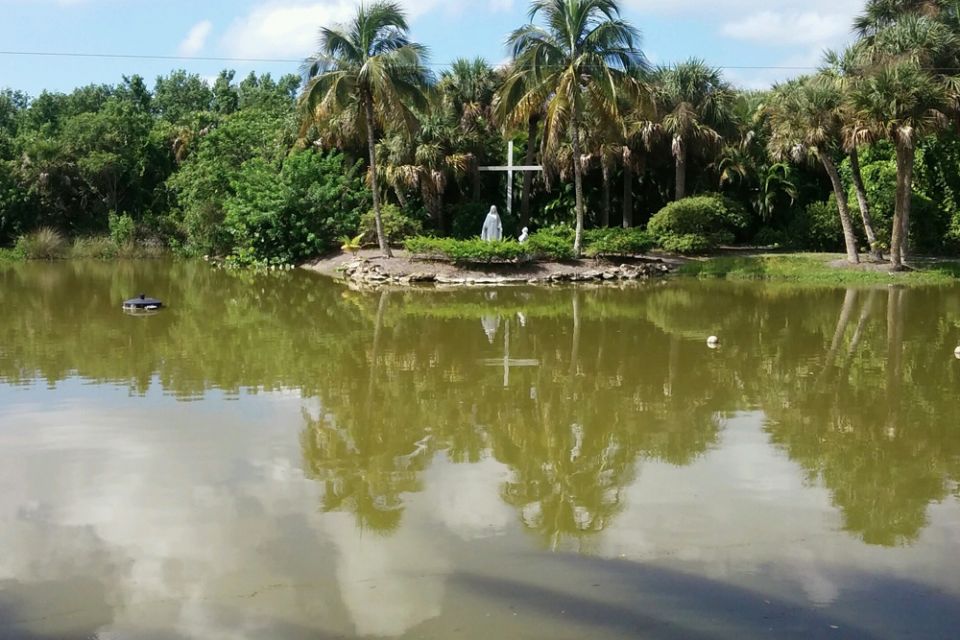 After the Vatican Congregation of Clergy ruling this year, Dewane ordered the priest to a rehabilitation facility in Michigan. Senk has declined, citing his health and what he says is his innocence.

He said that McIntyre gave him money in small installments as gifts. Dewane also questioned why parishioners agreed to give their pastor some $90,000 to retire the mortgage on a property he owned. The priest told NCR he was simply the recipient of generosity.

The wider specter of the current crisis in the church hangs over Senk's situation.

"He has gone out of his way to destroy my reputation," said Senk about his bishop, who has responded to parishioners with statements that there are serious matters about the priest that he is unable to reveal.

"In this day and age it's outrageous for a bishop to do that," said Senk, arguing that Dewane has cast a pall of suspicion over him without evidence.

Today, Senk is listed on the parish bulletin as pastor on paid leave. He still receives a salary and benefits from the diocese and resides on Sanibel, staying at the home of parishioners who are living much of the year up north. He is forbidden from saying Mass publicly, and is not allowed on parish property.

Senk supporters note a decline in church donations, something they attribute to widespread outrage over the pastor's removal. Some Easter collections exceeded $60,000, according to Senk, and the parish routinely collected more than $20,000 each weekend during the peak season. After his removal, the parish reported a more than 30% decrease in collections. It no longer publishes that information in the bulletin.

From the pulpit, Gates told Senk supporters that if they didn't like the situation at St. Isabel's, they could leave. Many have, with some landing at the local Episcopal church, while others refuse to go to Mass.

The easygoing, community-building character of Senk's liturgical style was changed by Gates, who emphasized solemnity at Mass. A recent parish bulletin noted, "The church is not an audience to be entertained; it is an army to be empowered." It also contained warnings about the dangers of socialism.

Dewane wrote, in a March letter to parishioners, that Senk had been found in violation of the Code of Pastoral Conduct of the diocese by the Congregation for Clergy at the Vatican. He was placed under precept for five years and, along with being ordered to a rehabilitation facility, needs to report any gift worth more than $500 to the bishop.

Senk said he will continue to appeal, and hopes that his canon lawyer will be able to overcome what he says is Dewane's inside track on the process.

"Rome seems to be tone deaf. There is no place to go, no place where you can count on being heard," he said.

Dewane countered that while he worked at the Vatican for 11 years, his influence is negligible. "I didn't run the Vatican. I worked there," he said. He also said he had no idea that Senk was a signer of the petition questioning his leadership style and that he has yet to hear a response from the pastor regarding the disciplinary measures imposed by the Vatican congregation.

Meanwhile, the prayers continue every Tuesday morning at St. Isabel's, calling to the heavens for a solution to a controversy that, begun during the Obama administration, lingers towards the end of the first term of the Trump presidency, going on four years with no end in sight.

*This story has been updated to correct photo credits and to correctly specify that Gray serves as a deacon for the Raleigh, North Carolina, Diocese.

A version of this story appeared in the Oct 18-31, 2019 print issue under the headline: Case engenders distrust at Florida parish .

The sacrament of touch