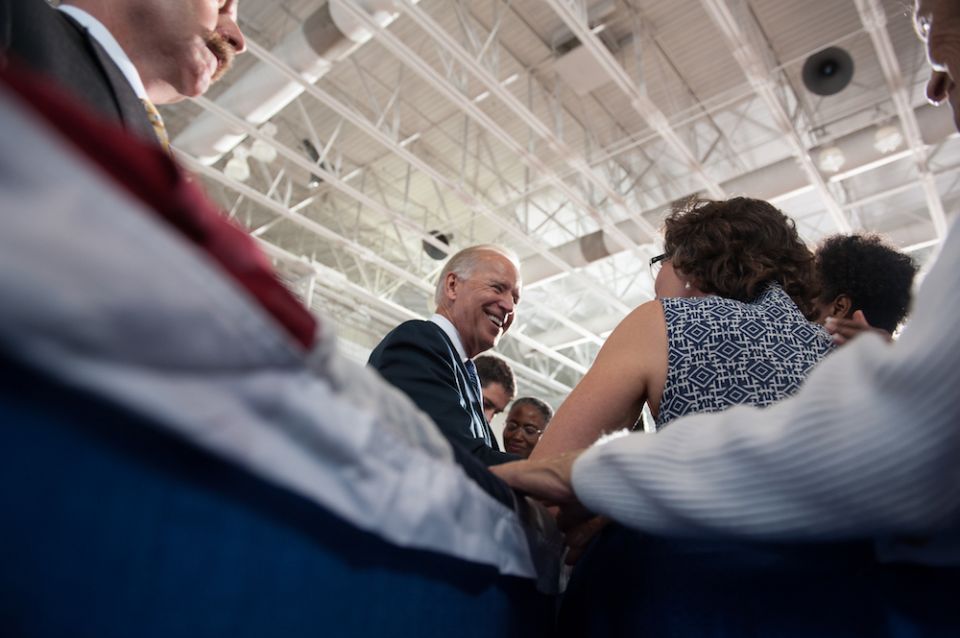 Although he has not officially announced, the fact is that everybody in the Democratic Party loves Joe Biden. This is especially true of a kind of left-leaning Catholic, you might say an NCR Catholic, for whom a commitment to social justice is part and parcel of our faith commitment. But should he seek the Democratic nomination for the presidency? Generally, the answer is no, with one narrow exception that I shall explain presently.

The son of Scranton reminds Democrats of the days when white, working-class folk voted for Democrats, not Republicans, and when the Democratic Party stood for activist government and suspicion of high finance. Joe Biden is as comfortable in a union hall as any potential candidate in this cycle. He also has a quality my late father had: He could make friends with a rock. Biden is gregarious and affable, unguarded. You could see President Barack Obama's key advisors cringe when Biden got going on a soliloquy: They were accustomed to the calm, cool, methodical, professorial Obama, and Biden's exuberance made them nervous. But it did not have that effect on voters. For average people, it made them believe Biden was authentic when he spoke about lunch-bucket issues. Indeed, he is one of the few Democrats today who can use words "lunch bucket" and not have it ring false.

To be clear, Biden has evolved in his political career and he is not entirely out of place in today's Democratic Party in which a focus on culture-war issues is often as important as a focus on those lunch-bucket, economic issues. Although I do not imagine anyone would, at a meeting, ask Biden by what gender he wishes to be identified, he is the guy who took down Robert Bork's nomination to the Supreme Court, so he is more veteran than virgin of the culture wars. And his eight years at Obama's side taught him a lot about navigating the fault lines in contemporary cultural politics.

This is Biden's unique status in the race as it is shaping up: If he runs, he is running as the high-low candidate, the one person who can unite, at the outset, both the neo-liberal Clinton/Obama wing of the party and the highly energized, economic populist wing of the party. He is more closely associated with the neo-liberal wing, in part because he was a senator from corporation-heavy Delaware and, more recently, because of his association with Obama, and simply because of his longevity: He was around when the "New Democrats" were new. Still, Biden is deeply respected by, even loved, by old pro-labor, economic populists like me. That said, populists know that once in office, all the pressure that is brought to bear on policy decisions comes from the neo-liberal side.

Playing high-low is tricky. As I noted in my articles about the candidacies of Sen. Elizabeth Warren and Sen. Kirsten Gillibrand, in this cycle, there will be two primaries within the primary, one for the neo-liberals and one for the economic populists. Biden is certainly the only candidate with political juice in both groups, but that is a different thing from being able to win among either group. Neo-liberals will want someone whose services they have purchased more recently than 2008 when Biden left the Senate. Populists want a true believer. In poker, if you call high-low and go for both, you need to win both. But you don't have to go for both. For the analogy to work in politics, I think Biden does have to go for both. He needs to beat Gillibrand and Sen. Kamala Harris for the neo-liberal sub-primary and beat Warren —and possibly others — in the populist sub-primary. I think he can do the former, but not the latter. There were too many times the Obama administration blinked when sitting across the table from Wall Street.

There is one circumstance in which I would completely support a Biden candidacy. It is well nigh to impossible to predict what the next few months will be like. No one knows how the government shutdown will end, but it is reasonable to assume there will not be much comity in the process or the outcome. Special counsel Robert Mueller may produce a slam dunk, but he might also produce something that is open to wildly varying interpretations in this highly polarized atmosphere. (Consider how so many Americans looked at the video of the Covington Catholic High School kids interacting with Native American demonstrators at the Mall last week, and how they saw completely different things from the exact same video!) If the country is pulled yet further apart, say, 66 senators appear willing to demand the president's resignation in the face of conclusive evidence of wrong-doing — and render a guilty verdict in an impeachment trial — but not 67, we are truly looking into an abyss.

In such a circumstance Biden, and only Biden, could run with a prominent, sane, Republican, someone like Ohio Gov. John Kasich or former Sen. Jeff Flake, on a national unity ticket, promising to serve only one term but to restore a sense of national unity and trust to the organs of governance. They could pledge to shore up the Affordable Care Act, pass comprehensive immigration reform, eliminate some of the more egregious tax giveaways enacted on Trump's watch, appoint centrist judges, and repair our nation's alliances. Nothing too controversial and nothing that would set the president and vice president at odds. The idea would be to govern from the radical center for four years, weakening the extremes in both parties. The campaign would be premised on saving the two-party system, which has served our country well, but giving it a four-year time out.

You can see the difficulty. The same reasons that make Biden the only person we can imagine leading such a national unity effort are the same reasons it is hard to see him winning among the fired up activists on the left.

Two other issues. First, our constitution bars religious tests, but frankly, I think it would be better for the Catholic Church in this country not to have a Catholic president. Half the church would denounce him as unfaithful, and the church is divided enough already. This consideration need not enter into Biden's decision-making process — he must care more about what is good for the country than what is good for the church — but it enters into mine. Second, Biden is one of those people who seem to get more energy, not less, as he ages, but he has been in Washington a long time. He lacks what Obama called the "new car smell." I do not think he is too old to run, but I think too much of his life has been spent in Washington to win.

Biden ran for president twice and lost. I do not see how a third time would be the charm. I can imagine him beating Trump, but I can't imagine him winning the primaries, only harming the eventual winner. And I can't imagine him being the kind of president the country needs, someone determined to begin tearing down the neo-liberal economic order. Apart from the national unity scenario sketched above, Biden should stay out of this race.

The left's fetish for a pristine past is misguided