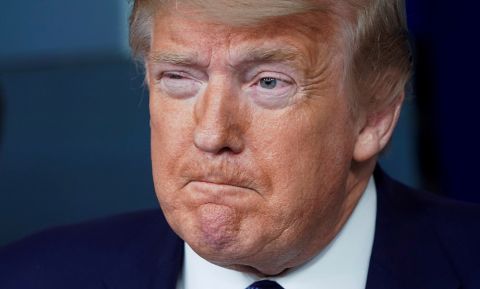 President Trump's job approval ratings among some faith groups jumped in March as the number of coronavirus infections began to spread across the country.

But that "Trump bump" has all but disappeared.

A new poll released April 30 from PRRI shows Trump's approval has fallen on average by 6 percentage points and is now more in keeping with 2019 levels among most demographic groups.

Among white evangelicals, Trump's favorability ratings fell to 66% from a high of 77% in March. White Catholic approval ratings of the president dropped to 48% from 60%. Perhaps the largest drop was among white mainline Protestants. Only 44% approved of the president in April, down from 62% in March. (Among nonwhite Protestants, Trump's favorability ratings did not change.)

Overall, 43% of Americans hold mostly or very favorable views of Trump (about the same as in February shortly after he was acquitted of impeachment charges).

"The jump we saw in March was unusually high, particularly for white evangelicals," said Natalie Jackson, research director at PRRI. "It was one of the highest favorability records we saw for Trump among that group. What we're seeing in April is a return to where they had been previously." 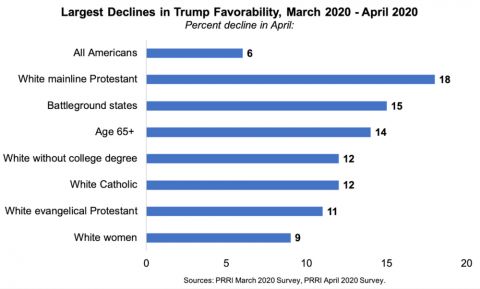 Jackson attributed the March bump to a "rally around the flag" effect, as more Americans saw Trump on TV daily responding to the virus as part of the White House briefings.

"Most people weren't paying attention so much to what he was saying as much as they saw him out there responding," she said. "That may be a substantial part of the rally effect. As the situation continued to get worse in many areas, that rally effect faded."

The poll also found that white Christians in counties less affected by the coronavirus are more likely to view Trump favorably than those in more affected counties (63% vs. 50%).

"There is no such difference among other religious groups," according to the survey.

The telephone survey was conducted between April 21 and April 26, 2020 in English and Spanish among 1,008 U.S. adults. The margin of error for the survey was plus or minus 3.5 percentage points.

Jackson said Trump's favorability ratings will likely continue to fluctuate as the 2020 presidential election draws near.

"I would be very cautious about reading these as meaning anything for the situation we'll have in November," she said.

Republican support for the president — now at 90% — typically rises before the election, though the pandemic has thrown a lot of uncertainty into the process.

Politics | Poll: The 'Trump bump' is over, especially among white Christians

In new play, conservative Catholics find a voice, and nuance

Minnesota bishops not waiting for governor, resuming larger Masses May 26