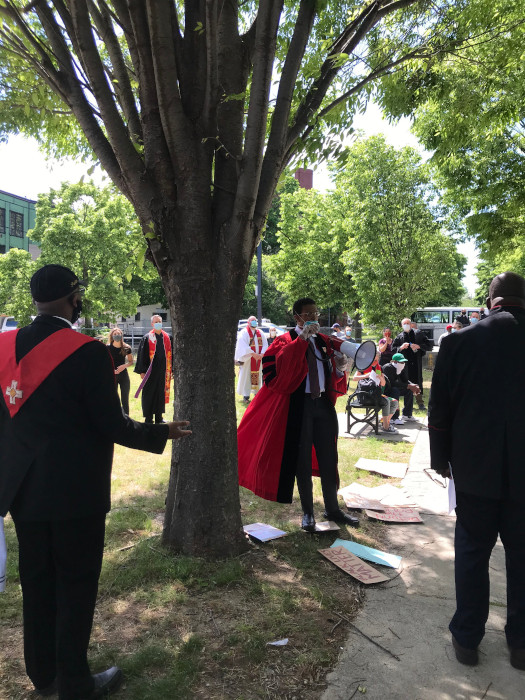 Clergy protest in the Boston area, Sunday, May 31, 2020. Photo by Laura Everett 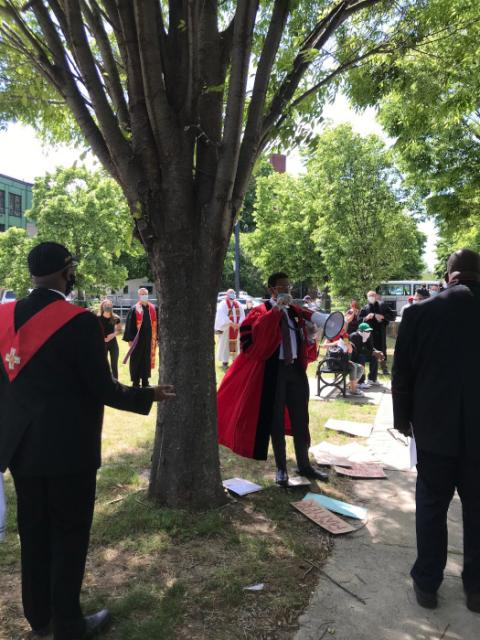 Clergy protest in the Boston area, Sunday, May 31, 2020. Photo by Laura Everett

Many religious traditions call on believers to stand with the marginalized, an axiom often interpreted as a broad command to defend the rights of others.

Sometimes this means pushing for new laws or marching in streets to demand action.

Other times it means getting pepper-sprayed in the face.

This past weekend the Rev. Laura Young said she decided to take the edict literally, which is why she spent most of May 30 afternoon recovering after police sprayed her in the face with noxious chemicals.

"I had it in my ears, in my eyes," said Young, describing the moment an officer sprayed her while she was standing — wearing clerical robes and a red Pentecost stole — at the front of an anti-racist protest in Columbus, Ohio.

Young, a 50-something United Methodist minister who describes herself as a "tentmaker pastor," was one of many clergy around the country who took part in the demonstrations that sprang up in response to the death of George Floyd.

They often took different approaches in their protesting.

Some preferred to express solidarity from afar — from their pulpits or social media accounts. Others organized their own faith-based demonstrations. A few activist-minded believers decided to, as they described it, " use their privilege " to put their bodies on the line in confrontations with police.

For Young, a longtime liberal activist, the best way to carry out her ministry was to leap directly into the fray. Her close encounter with police was recorded on her Facebook livestream, which showcased images of an armed officer pointing the canister at her and releasing a stream of pepper spray.

Young said the experience was painful, likening the burning sensation in her eyes to "touching a hot stove." But when strangers carried her to the safety of a nearby church, things took on a more spiritual dimension.

"I felt like I was on the Jericho road," she said, a reference to the biblical parable of the good Samaritan. "I think we as clergy need to be literally standing with people in the margins."

Other clergy had similarly harrowing experiences.

The Rev. Alan Dicken, a Disciples of Christ minister, told Religion News Service in a phone interview that he was tear-gassed while participating in a demonstration in Louisville, Kentucky, on May 29. The next day, he was shot with nonlethal projectiles in Cincinnati.

Dicken said he was attempting to de-escalate tensions between an advancing line of police and demonstrators in Ohio when officers opened fire, striking him several times.

"I'm wearing a clergy collar and a stole with my Disciples of Christ logo on it," he said, noting that he also participated in anti-racism demonstrations in Ferguson, Missouri, after the 2014 shooting of Michael Brown. "I've never seen such aggressive action unprompted."

Dicken spoke to RNS while participating in yet another protest, raising his voice to be heard over the sounds of chanting.

Like Young, he said his activism is a matter of faith.

"In my reading, Jesus was very clear about what his ministry is, and how following him means taking up that cross," he said. "It doesn't lead to acceptance or being loved all the time. It often leads to being scorned, to being shot at, tear-gassed, whatever. To follow that Jesus means to love in a way that sometimes puts you in harm's way, and that's not something to be afraid of."

The bold — and often unsung — activism of faith leaders such as Young and Dicken echoes the work of clergy who participated in anti-racism demonstrations in Ferguson and in Charlottesville, Virginia, when white supremacists stormed the town in 2017.

In both instances, a diverse band of clergy and faith leaders who stood on the front lines of the protests were primarily lesser-known and stalwartly progressive, often with a history of deep engagement with activism.

After the opening wave of protests, other faith leaders have begun organizing faith-fueled demonstrations to express solidarity as a group, showcasing spiritual strength in numbers.

In Portland, Oregon, the Portland Interfaith Community assembled dozens of faith leaders to decry racism and police brutality, some of whom met with the city's mayor. In North Carolina, a group of faith leaders who stood near demonstrations was joined by the Rev. James Forbes, the emeritus minister of Riverside Church, a famous liberal church in New York City.

And on May 31 afternoon in Boston, hundreds participated in a prayer march, organized by black clergy and led by a coalition known as Clergy United in Prayer, Protest, Peace and Justice. Religious leaders marched from Roxbury's Nubian Square to the Boston Police Department plaza, wearing robes, collars, red stoles and face masks.

The event was a peaceful protest to bring together clergy to pray for justice for Floyd and others who have been "brutalized and criminally murdered" by police, leaders said.

"We pray that justice will prevail, that justice will be victorious, that what is right will win the battle," said the Rev. Miniard Culpepper, senior pastor of the Pleasant Hill Missionary Baptist Church in Dorchester. "I believe that when you see police kneeling around the country, kneeling for what's right, we're seeing a movement taking place around the country to bring this country together in a way that it's never been united before."

With police commissioner William Gross looking on, the coalition held a moment of silence at the plaza lasting eight minutes and 49 seconds — the period of time that a Minneapolis police officer knelt on Floyd's neck. Floyd's death has been ruled a homicide by the Hennepin County Medical Examiner, who announced on June 1 that Floyd died due to "cardiopulmonary arrest complicating law enforcement subdual, restraint, and neck compression."

"We are not here to placate the unrest and the rage that is taking place in our community," Borders said, before praying: "O God, our land is in need of healing. ... The lack of resolve for the endless mutilation of black bodies, the disparity between the haves and the have-nots, is worsening and causing more unrest."

Mahdee reminded the crowd of protesters that those who take violent action against others because of racist beliefs would face both legal and spiritual consequences for their actions.

"I'm here today to let you know that you will be dealt with not only in this life but in the next," he said.

In other states, many faith leaders joined existing demonstrations.

Catholic priests marched with students of historically black colleges in Atlanta. In Minneapolis, Rabbi Michael Adam Latz has been present at multiple demonstrations, arguing that "Judaism demands we speak out against the racism and racist police officer and racist systems that murdered George Floyd." And the Rev. Willie Francois of Mount Zion Baptist Church in Pleasantville, New Jersey, attended a march in Atlantic City.

"We're going to keep kneeling on fields until they stop kneeling on our necks," Francois said in a video of himself marching with demonstrators.

Clerics associated with more established groups, such as the U.S. Conference of Catholic Bishops, have been less visible at demonstrations, opting instead to issue statements condemning police brutality and racism.

"The killing of George Floyd was senseless and brutal, a sin that cries out to heaven for justice," the USCCB's president, Archbishop José H. Gomez, said in a statement. "How is it possible that in America, a black man's life can be taken from him while calls for help are not answered, and his killing is recorded as it happens?"

Faith leaders say they will continue to advocate in the days ahead. On June 1 evening, Culpepper and other local pastors will join another multifaith vigil  in Dorchester led by the group Prophetic Resistance.

"When the reporters and TV cameras move on and find someone else, we'll still be in the trenches dealing with this issue," said Aderonke Lipede, a criminal defense lawyer who works with Prophetic Resistance Boston. "If we don't stop it, it's going to get worse. How long can we tell people, 'Just wait, let's just talk about it or do a study about it?' That's not enough."