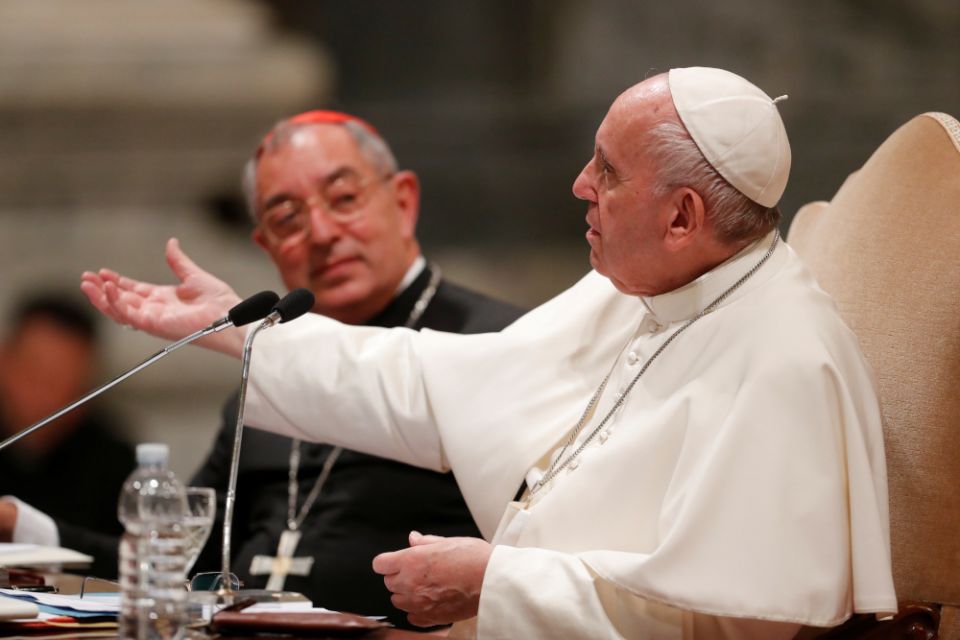 Pope Francis gestures as he addresses more than 1,000 diocesan leaders, both clergy and laity, May 9, 2019, at the Basilica of St. John Lateran, the cathedral of the Diocese of Rome. Seated next to the pope is Cardinal Angelo de Donatis, vicar of Rome. (CNS/Reuters/Remo Casilli)

Vatican City — A diocese that cares more about being an organized workplace rather than announcing the good news can fall prey to clericalism and distance itself from Christ, Pope Francis said.

In creating a "functionalist diocese," the pope said, local churches are in danger of transmitting a "new ideological colonization that seeks to convince others that the Gospel is wisdom and doctrine but not an announcement, not a kerygma."

Francis addressed over 1,000 diocesan leaders, both clergy and laity, May 9 at the Basilica of St. John Lateran, the cathedral of the Diocese of Rome.

The pope listened to several people – a young woman, a couple and a priest – who recounted the various joys and challenges they face in their work within the Roman diocese.

Speaking for nearly 50 minutes, Francis warned diocesan leaders that with so many difficulties facing Catholics, such as loneliness, poverty and the dangers of drugs and alcohol, there is a temptation for parishes and the diocese to try "to put things in order."

When things seem unbalanced, he said, "we are called to take this imbalance with our hands, we cannot be afraid of imbalances."

To explain his point, the pope recalled the Gospel account of the disciples imploring Jesus that it was late, and he should dismiss the crowds who were listening to him preach.

"That diocese today," he continued, "distances itself more and more from Jesus Christ because it worships the harmony – not of beauty – but the harmony of worldly functionality."

Francis said that when dioceses fail to announce the good news, they instead "invent synods and more synods that aren't really synods, just more reorganization."

"Why?" the pope asked. "Because if it were a synod, the Holy Spirit would be present. The Holy Spirit kicks the table over and starts from the beginning."

"Let us ask the Lord for the grace of not falling into (becoming) a functionalist diocese," he said. "But I believe that from what I have heard (in this diocese), things are well-oriented and we are going forward."