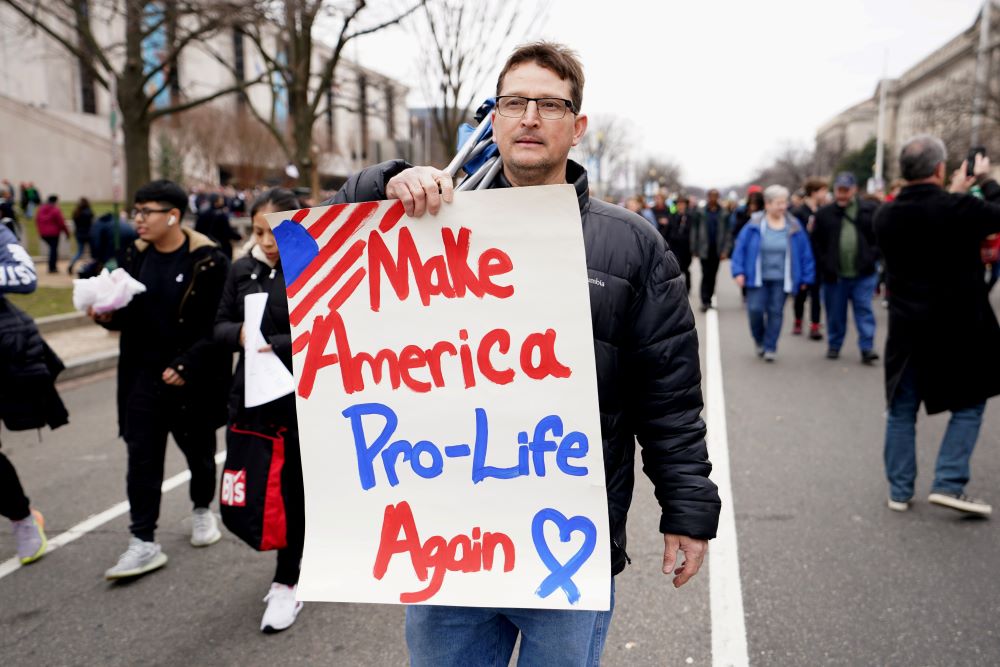 A pro-life supporter in Washington marches Jan. 4, 2020, during the 47th annual March for Life. (CNS/Reuters/Kevin Lamarque)

Following the U.S. Supreme Court's June 24 decision overturning Roe v. Wade and the constitutional right to an abortion, multiple statements from Catholic bishops and pro-life leaders across the country hailed the decision as a "victory" in a 50-year-long culture war and an occasion for "joy."

Vatican officials, however, have taken a different tone in a series of recent statements and interviews — primarily emphasizing that opposition to abortion is only one facet of the Catholic Church's pro-life stance.

Their tack seems to follow the lead of Pope Francis, who has not minced words in his opposition to abortion but has also indicated that the church "cannot insist only on issues related to abortion," as he put it in his first major interview after being elected pontiff in 2013.

Theologians and Vatican officials told NCR that the differences between American and Vatican responses to the high court's June 24 ruling in Dobbs v. Jackson Women's Health Organization reflect different approaches to how Catholic leaders navigate one of the thorniest policy matters in public life today. 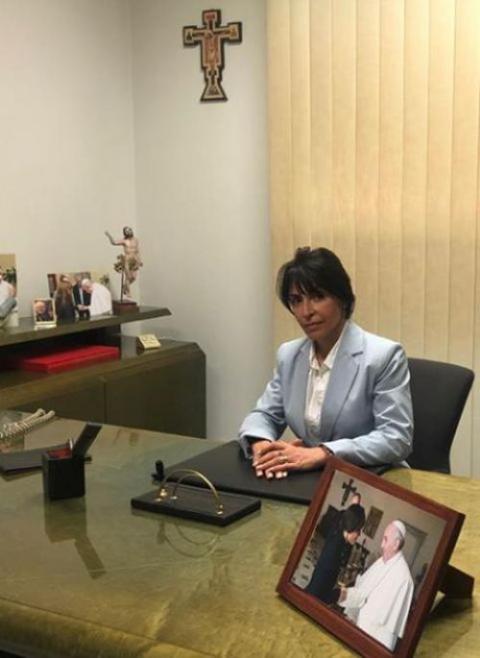 "Human dignity is non-negotiable," she told NCR, adding that it cannot be limited to just issues of abortion or euthanasia, but must also include the "'in between' issues."

In a Vatican News editorial responding to the Dobbs decision, Andrea Tornielli, editorial director of the Vatican's Dicastery for Communication, wrote that "being for life, always" must include concern for issues beyond abortion. Tornielli included concern for maternal mortality, paid parental leave and combating gun violence, among other issues.

Similarly, in its official response, the head of the Pontifical Academy for Life, Archbishop Vincenzo Paglia, said in a statement that being in favor of life includes "ensuring adequate sexual education, guaranteeing health care [is] accessible to all and preparing legislative measures to protect the family and motherhood, overcoming existing inequalities."

In a follow-up interview, Paglia told NCR that being pro-life must also include reducing access to guns and ending the death penalty. 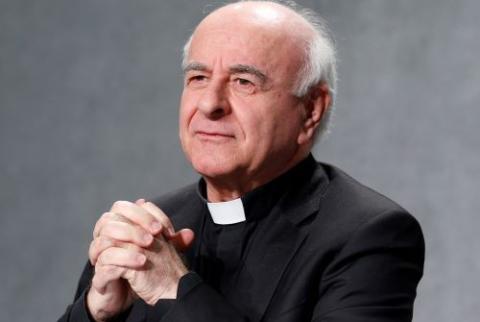 Archbishop Vincenzo Paglia, president of the Pontifical Academy for Life, is pictured in a file photo during a Vatican news conference Jan. 15, 2019. (CNS photo/Paul Haring)

Cuda said that focusing on the "in between" issues is one reason Francis appointed her to the pontifical academy. She said the pontiff wants to make clear that the defense of life is not limited to just "the moment[s] of gestation and death" but issues beyond the realm of bioethics, including combating a range of social injustices.

The concern for an expansive set of issues, she added, is why the Vatican's response to the Court's overturning of Roe is meant to strike a more dialogical tone and emphasize that Catholics must champion a range of issues under the banner of what it means to be "pro-life."

Daniels, who is also a member of the Vatican's Dicastery for Communications, said that the pope's approach includes "reinforcing that all human beings have an inviolable dignity, including unborn children; resisting ideological blinders by recognizing that issues of life and human dignity are all interconnected; and calling for solidarity with the vulnerable, including public policies that promote social and material support for women and children in need."

Francis wrote in his 2016 apostolic exhortation, Gaudete et Exsultate, for example, that: "Our defense of the innocent unborn, for example, needs to be clear, firm and passionate, for at stake is the dignity of a human life, which is always sacred and demands love for each person, regardless of his or her stage of development."

"Equally sacred," he continued, "however, are the lives of the poor, those already born, the destitute, the abandoned and the underprivileged, the vulnerable infirm and elderly exposed to covert euthanasia, the victims of human trafficking, new forms of slavery, and every form of rejection." 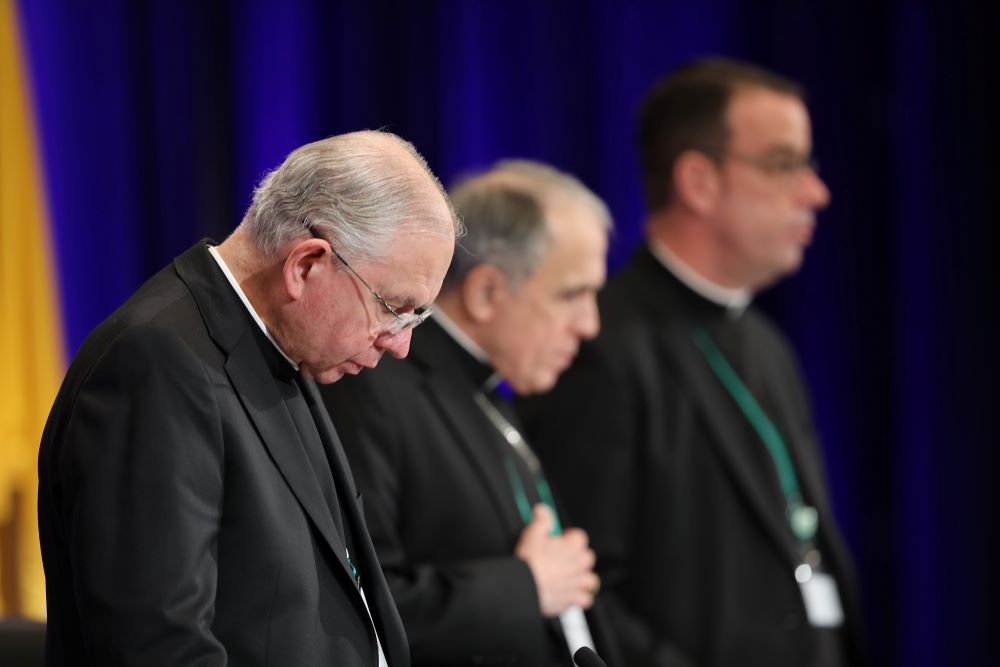 U.S. Conference of Catholic Bishops leaders pray during their 2019 fall general assembly in Baltimore. At that meeting, the majority of bishops voted for language in the document "Forming Consciences for Faithful Citizenship" that makes abortion the church's "preeminent priority." Pictured, from left, are Archbishop Jose H. Gomez of Los Angeles, Cardinal Daniel N. DiNardo of Galveston-Houston and Msgr. J. Brian Bransfield. (CNS/Bob Roller)

By contrast, in a controversial 2019 vote, the U.S. bishops declared combating abortion to be their "preeminent priority" in public policy concerns.

Therese Lysaught, a professor at the Neiswanger Institute for Bioethics and Health Policy at Loyola University Chicago and a corresponding member of the Pontifical Academy for Life, said that U.S. bishops' conference statement in response to Dobbs reflected the way life issues were approached under Pope John Paul II, rather than Francis.

She said that John Paul's 1995 encyclical Evangelium Vitae "advances a deeply polarized ideology of the 'culture of death' against which Catholics must fight by obeying the moral law or, better, changing the civil law."

"Pope Francis' tone has been very different," she continued.

"He has tried to redirect the church’s attention from an obsessive focus on law," she observed, and "has consistently shown how the distinction between 'life' issues and 'social' issues is a false distinction."

As evidence of this, Cuda highlighted the pontifical academy's new publication of a major anthology, Theological Ethics of Life, which she said is meant to illustrate this renewed approach to life issues that is "not a matter of taking fundamentalist positions, loaded with ideology, but of opening the debate within the community of moral theologians to think of a theological ethics that respects the human condition."

'Sadly, many Catholics fall into the temptation of confusing defense of life with defense of ideological positions.'
—Emilce Cuda

Similarly, Lysaught said that under Francis, the church is seeking to be a "healing presence amidst the messy realities of the world" rather than engaging polarizing issues as part of a culture war.

In the aftermath of the Dobbs decision, Lysaught said, statements coming from Vatican officials "strike a tone of carefulness and prudence regarding the ambiguities and complexities of the issue" of abortion. She said they "reiterate Pope Francis’ clear and consistent statements on the morality of abortion while situating it within a broader spectrum of life issues, emphasizing the need for fundamental socioeconomic changes, and foregrounding the need for dialogue aimed at social healing."

Lysaught characterized the U.S. bishops' statement after the Dobbs decision as treating those wider commitments as an "afterthought … buried in one sentence in the penultimate paragraph."

"The [bishops'] statement triumphs the victory of one side of an ideologically polarized issue, continuing that polarization," she added, saying that after a decade of the Francis papacy, many U.S. church leaders have failed to embrace his vision.

Said Daniels: "This is a challenging moment."

"Pope Francis’ approach," Daniels continued, "offers a model for how Catholic and other pro-life leaders can rise to the challenge: by moving past politics as usual, witnessing to a consistent ethic of life, and making solidarity with women and children in need a defining priority."

A version of this story appeared in the July 22-Aug 4, 2022 print issue under the headline: Vatican responds to Supreme Court overturning Roe.