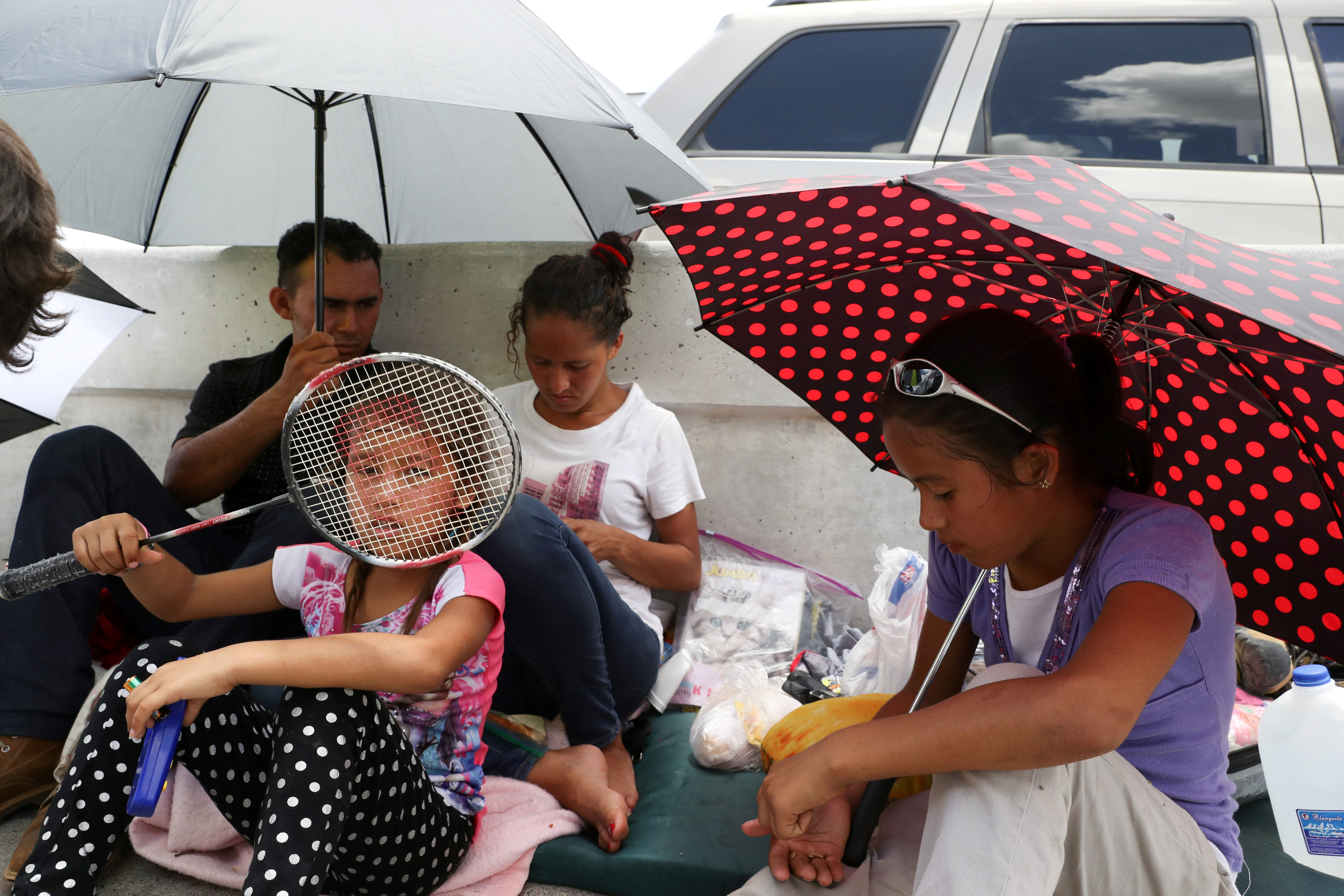 A Honduran family near Brownsville, Texas, seeks asylum June 26 while waiting on the Mexican side of the Brownsville-Matamoros International Bridge after being denied entry by U.S. Customs and Border Protection officers. (CNS/Reuters/Loren Elliott)

When White House press secretary Sarah Huckabee Sanders was asked last week about widespread religious pushback to the Trump administration’s "zero-tolerance" policy separating families along the U.S.-Mexico border, she turned the responsibility back on people of faith.

"I think any evangelical, or any church for that matter, that feels strongly — they should open up their doors and help facilitate some of these individuals," Sanders said.

But as it turns out, some faith groups already were.

In the past few weeks at least two faith-based agencies have sheltered or are currently caring for as many as 171 immigrant children who were separated from their families as a result of the widely condemned policy.

The service, which is sometimes called "short-term" or "transitional" foster care, is being offered by Lutheran Immigration and Refugee Service, which has helped the United States Office of Refugee Resettlement with placing foster children for 15 years, as well as Catholic Charities, which works under the purview of the U.S. Conference of Catholic Bishops.

LIRS spokesperson Danielle Bernard said the organization noticed an uptick in the number of cases it received more than a year ago and began tracking those numbers for the first time. Five cases a month became seven, then 14, totaling about a hundred cases total between May 2017 and April.

Then came the announcement of the "zero-tolerance" policy at the U.S.-Mexico border, and about 50 more children came to LIRS in "a very short period of time," Bernard said. They are as young as 18 months and as old as 17 years, most of them under the age of 6.

"We've always seen unaccompanied kids" when family members crossing the border were suspected of trafficking or weren't able to prove their relationship, said Bernard. "The difference with this is really we've never seen kids of this age and especially not in these numbers."

Children are classified as unaccompanied minors once they are separated from their families at the border, according to Bernard. Most are sent to shelters, but those considered most vulnerable due to their age or other circumstances are moved to transitional foster care with agencies such as LIRS and Catholic Charities, which try to find someone in the U.S. who can prove a familial relationship to care for them.

J. Antonio Fernandez, president and CEO of Catholic Charities Archdiocese of San Antonio that is housing 23 children separated from their families in addition to other unaccompanied minors, said groups such as his and LIRS offer better environments for the children than government facilities. "When you come to our places, you don't see a single cage, any child who is upset or sad because they're cold or hungry or anything like that," he said. "They're in a beautiful place, a beautiful location with everything they need but the love of their parents. And that's why we always try to reunify them with their parents — the sooner the better."

As they've helped accommodate the tide of separated children, the USCCB and the presiding bishop of the Evangelical Lutheran Church in America have condemned the family separation policy. Fernandez traveled to Washington last week to speak at a House of Representatives panel on the issue.

"It's not my job to go out there and get in front of the government and just start screaming," Fernandez said. "But it is my job to make people aware that this is not right. This is not a human thing to do to these families."

According to LIRS, 120 of the 148 children who have come through its system have been placed with family sponsors in the U.S. — either a parent other than the one who has been detained, a relative or another legal guardian, Bernard said.

At least 81 of those children are in the care of Bethany Christian Services, according to local news reports in Michigan, where the organization is based. Bethany Christian Services has an 18-bed group home for boys ages 14 to 18 in the state, but officials at LIRS said they had no information that any of the separated children were staying there.

Lutheran Services Carolinas confirmed in a written release it only has received five children between the ages of 7 and 11. International Christian Adoptions could not be reached by Religion News Service, but LIRS said the agency had not yet seen any of the separated kids and, despite the name, was clear none of the children in the program were eligible for adoption.

"They have parents somewhere," Bernard said.

But, she said, it's been hard to find them. LIRS doesn't get systematic data about where any given child's parent is. It's left up to case managers to locate those parents, calling U.S. Immigration and Customs Enforcement hotlines and getting what information they can from older children.

"If you're talking about an 18-month-old kid who came in with limited information, it's not like you're going to get them to talk and tell you what their parent's first and last name is," Bernard said. "It's been hard. It's been really difficult for our case managers — it's a huge part of the work they're doing."

At Lutheran Services Carolinas, program director Becky Gibson's top priority has been to connect the children with their parents by phone, according to a written release. All five of the children in the agency's care have spoken with a parent, as well as with other family members in their home country or in the U.S. One has already been placed with relatives here.

Normally it takes Lutheran Services Carolinas about a month, but Gibson estimated that it would take at least five weeks to find a relative for each child separated at the border.

In the meantime, the children have little understanding of what is happening to them or why they have been taken from their parents. Foster families don't always speak Spanish and sometimes neither do the kids, who may speak indigenous languages or local dialects, Bernard said.

"We do make sure they have the ability to communicate and are not just throwing them into a situation where they can't understand each other," she said.

The children receive case management services, counseling and schooling — including field trips —  in their native languages.

'Being a prophetic witness'

For an agency like LIRS, faith is a major motivation in caring for children separated from their families.

"When LIRS was established after World War II to help Lutherans fleeing violence, we quickly realized that people from our faith were not the only ones who needed help. The Bible calls us to welcome the stranger, it calls us to love our neighbor, and we really see this work as answering this call and being a prophetic witness," Bernard said.

But that doesn't mean they're trying to convert the children in their care, she said, adding, "Proselytization is a very strict and hard no."

Fernandez noted that Catholic Charities does try to care for the spiritual needs of children who arrive at its door, many of whom grew up in deeply Catholic countries. He said both facilities in San Antonio housing the children have a chapel available for Mass; priests will sometimes come and play soccer with the kids, he said, and afterward "will talk about everything in life, and that includes talking about God" to those interested.

But he echoed LIRS in noting that his organization does not force faith on anyone in its care, and its role is to provide services, not evangelization.

As the headlines move on in the wake of the presidential order ending family separations, the agencies are still in need of donations — Bernard said LIRS has seen "a huge spike in online donations" that will go toward shelter, clothing, counseling and advocacy efforts. On Thursday (June 28), its website included a prominent link to a GoFundMe page  it created. They also need lawyers, Fernandez said.

"I am asking — for all the immigration programs that we have — for money to hire more lawyers," Fernandez said.

Religion News Service reached out to the Administration for Children and Families, which helps guide these programs on the government side underneath the U.S. Department of Health and Human Services, but they did not immediately respond to specific questions about the initiatives.