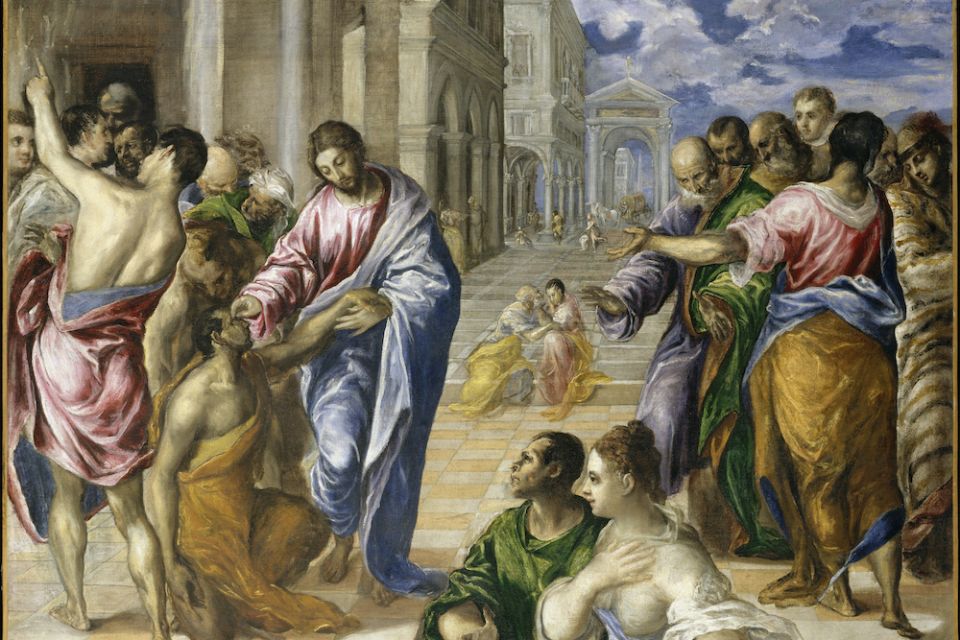 How would you explain color to a person born blind? Think about it. The person you are talking to has absolutely no frame of reference for what you want to describe. You might explain that different colors distinguish objects like different tastes distinguish foods. But all the non-seeing person would get from that is the concept of difference. You have told him nothing about sight, or red, green, purple, bright or hazy.

A person born blind has nothing in her repertoire of experience to help her imagine seeing. Imagination is built on images — and someone who is not sighted has no visual images. That person can learn to read Braille and to navigate in the world of objects. She will probably develop other senses to a degree that seeing people do not. But no matter how well she navigates the world, she will never have real insight into the visual world.

In this third week of our Lenten pilgrimage, we're invited to put ourselves in the sandals of the man born blind. The disciples saw him as the object of a theological discussion: something was obviously wrong, and their response was to figure out who to blame. Was it the guy or his parents? Now, how could a child born blind be any guiltier than the others who were born that day? Thus, it must have been the parents! Voila! Problem solved!

Jesus would have none of that. Not one to theorize about other people's poverty, he responded to the man's need. Molding the matter out of which God had created the Earth, he covered the man's useless eyes.

In John's story, the blind man didn't ask Jesus for anything. That suggests that he didn't know enough to ask for what he didn't have. Instead, Jesus initiated a relationship with him and smeared his eyes with a mixture of clay and saliva: the earth and his own essence. That combination of heaven and earth held healing power.

When people interrogated the once-blind man about what happened, he said, "The man called Jesus made clay and anointed my eyes." Note choice of words! Making clay is no big deal — every kid knows how to do that. But Jesus did something different. He symbolically reenacted God's creative work of fashioning human beings from the clay of the Earth and used it to repair the man's vision. Beyond that, the man who saw said, "He anointed my eyes."

The Greek word for anointed is epichrio; it comes from the same root as the words chrism and Christ. We might say that the man born blind said that Jesus Christified his eyes.

This leads us into the key question of this week's Gospel: what would it mean to allow our eyes to be Christified? Jesus of Nazareth is no longer walking through our streets. But we do believe in his promise to remain with us until the end of time. How might he be reaching out to us to anoint our eyes, to Christify our vision?

If we follow the story of the man who received his sight, we see that he went through stages of development. First, he accepted Jesus' invitation to wash, which may be an allusion to the baptism most of us received in infancy's ignorance. Then, just as he was learning to see, he went on trial for having been healed. Although he didn't have all the answers, he held his own against his interrogators: "I don't know who he is, but if he were not from God, he wouldn't have been able to give me sight." That piece of logic was all it took for him to be expelled from the community. The guardians of orthodoxy were certain that no good person would heal on a Sabbath.

At that point, one wonders if the once-blind man might not have regretted his cure: His sight was bringing him nothing but trouble. His parents had avoided defending him, the neighbors had brought him to the religious leaders, and they had excommunicated him — all because "the man called Jesus" had opened his eyes.

In the final scene, Jesus again approached the man who saw. Now, Jesus asked him if he believed. The man admitted that he didn't yet know enough — he didn't understand who had healed him. When Jesus revealed himself, the man saw him for who he was and believed.

Jesus summarized the incident warning that we should never be too sure that we see clearly. No matter how great or insightful our faith, allowing our vision to be Christified is a lifelong process. The healed man might warn us that such a vision can lead to trouble — but he would also certainly tell us that is worth the price.

This story appeared in the March 6-19, 2020 print issue under the headline: Christifying vision .