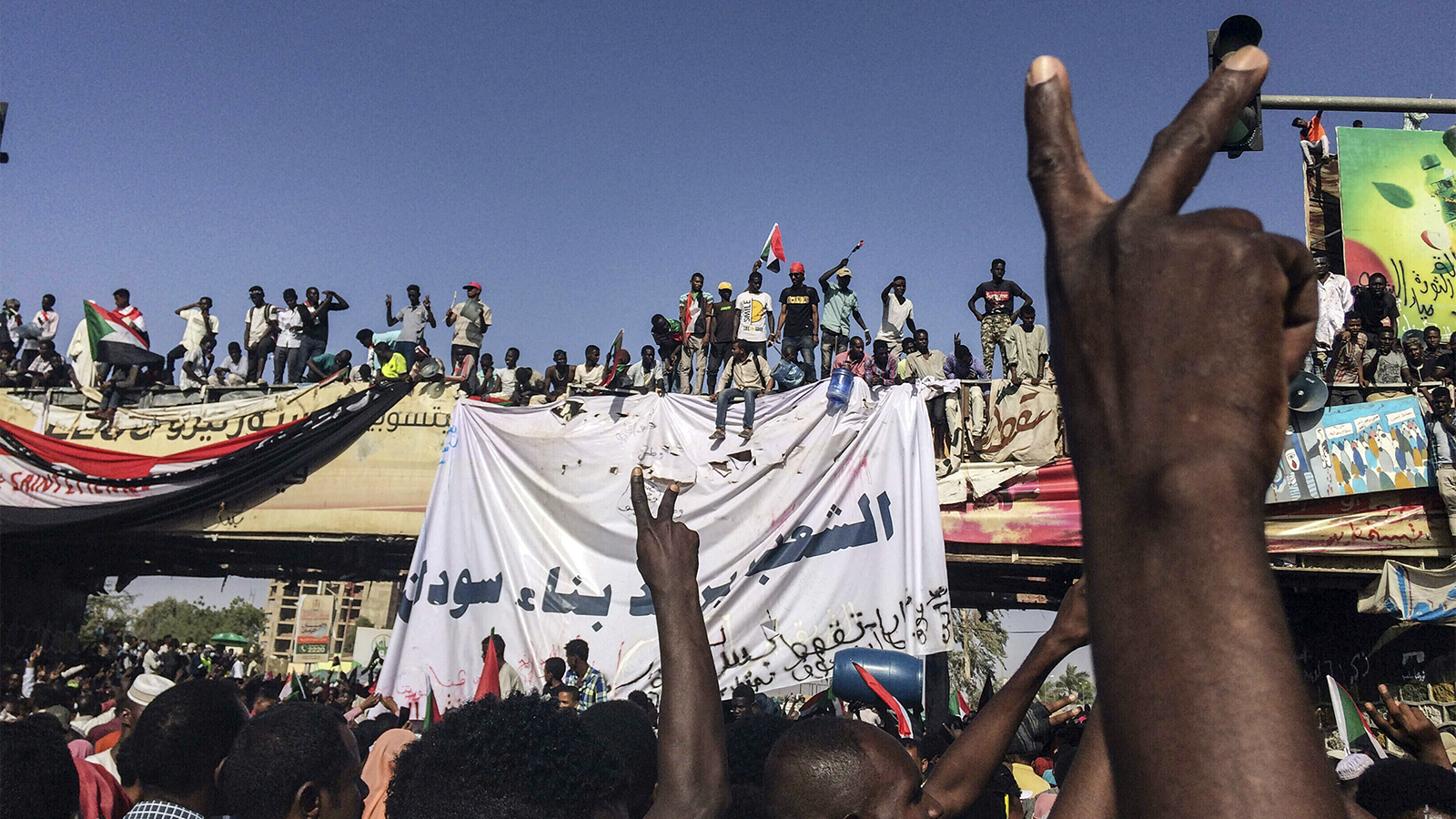 Sudanese demonstrators rally to demand that a civilian body lead the transition to democracy, outside the army headquarters in Khartoum, the Sudanese capital, on April 13, 2019. (AP)

A Roman Catholic bishop in Sudan has charged that the largely Arab and Islamic country's ongoing popular revolution will be hollow if it does not also deliver freedom of worship for non-Muslim faiths.

"A civil society movement has for the first time brought all Sudanese people together, and the church is part of it," said Bishop Yunan Tombe Trille Kuku of the Diocese of El-Obeid in south-central Sudan.

"However, the latest developments may mean nothing for the church ... unless the system of treating them as NGOs (nongovernmental organizations) is removed."

Members of Sudan's Christian minority, particularly young people, have taken a prominent role in the massive demonstrations that began in December as protests against cuts in government subsidies for bread and fuel, which eventually led the military to depose President Omar al-Bashir, on April 10. Now the crowds have erected barricades on the streets outside army headquarters, pressing the military's governing council to step aside in favor of civilians.

At least 38 people have died since the start of the protests, although human rights groups say the number is higher.

Christian groups have held prayers and services during the protests, with Muslims often joining in the singing of the hymns.

Sudan's Constitution guarantees freedom of worship, but Islam has remained the de facto state religion and Shariah, or Islamic law, governs many civic institutions. Preaching by non-Muslims is officially banned. Religious groups are required to register with the government as nonprofit NGOs, and their activities and personnel are closely watched. Church leaders have also been frequently arrested and harassed by the national intelligence service.

In Christian villages in the Nuba Mountains, in the south of the country, hospitals and schools have encountered frequent aerial bombardment, in what church leaders see as government attempts to eradicate Christianity from the region.

The protests have provided all Christian groups the opportunity to demand more freedom.

At a prayer service outside army headquarters on April 14 that was attended by leaders from Sudanese Protestant churches, including Presbyterians, Baptists and the Sudan Church of Christ, Pastor Rafaat Sameer Masaad, the head of the Evangelical Synod in Sudan, told the crowd that 2,000 years after Jesus led a revolution against slavery, injustice, division and hatred, life for his followers in Sudan was still difficult.

"The state treats us as a bunch of foreign spies working to destroy our homeland," Masaad said. "But we thank God for the awakening of our conscience during this revolution."

The protests, he added, were a chance for the people to go beyond religious divisions to build "an inclusive unifying Sudanese national identity."

Kuku said he was hopeful that the young demonstrators' "new mind" would "break the taboo of speaking about Christians and their churches." But he added that after 70 years of restrictions on the church's activities, he wants to see the laws that impede religious freedom change, not just attitudes.

"It is too soon to think those voices would make some difference. I speak from my experience. I've learned to believe half of what I hear and see," he said.

Kuku said he appreciated the power of the demonstrators to rid the country of al-Bashir's dictatorship but feared that if the military council does hand power to a civilian leader who is Muslim, the voices calling for change — including those of Christians — will soon be extinguished.